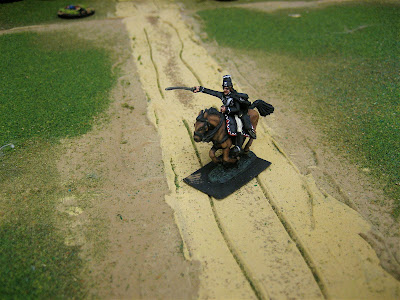 My first painted sample of the new Minden SYW Prussian Hussars. This is of course one of the Black Hussars (H5 or von Reusch Hussars) Click the picture to enlarge the view.

This evening I primed the 18 Minden Prussian Hussars that I assembled yesterday and then pitched into painting my first sample. The sample figure is painted as one of the Black Hussars, which was a 10 squadron regiment that had 3 squadrons serving in Western Germany with Prinz Ferdinand's army, while the remaining 7 squadrons were primarily deployed in East Prussia to fight the Russians.

I always paint one figure to completion whenever I start on a new battalion or cavalry regiment. This allows me to get more familiar with the figure and how best to work with it (i.e. the order in which I should paint the various parts and equipment pieces etc). It also helps me experiment with some of the colors. In this case, I wanted a lighter brown horse so I tried some different shades and highlights in the lighter brown color spectrum before settling on something that I liked.

Here are some more pictures of the Prussian hussar, taken from different angles. 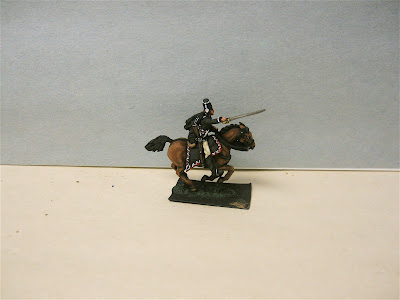 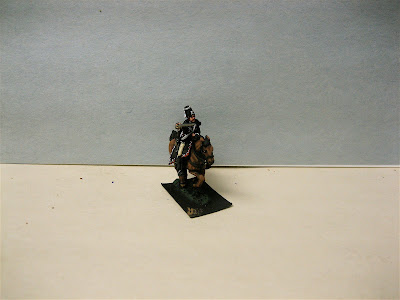 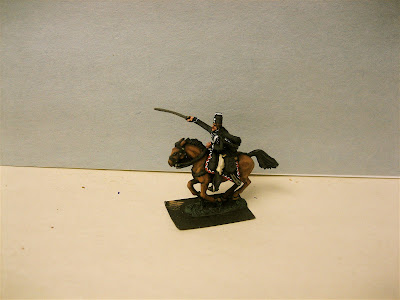 The figure was relatively easy to paint -- afterall, it is mostly black. The red and white "Van Dyking" that edges the shabraque was actually the hardest item to paint on this figure. Much of the braids and buttons on the dolman and pelise are artfully concealed by the positioning of the clothing items. The braid that is visible is detailed enough that you can either lightly dry brush white over it or actually paint in the white squiggles with your brush. I chose the latter option on this figure. For black highlighting, I mix in some flesh color paint with my black to get a very nice highlight that makes the uniform "pop" out at your eye. I learned this little trick from someone on The Miniatures Page a couple years ago.

I am really pleased with the way that this first figure turned out and I can't wait to start painting more figures tomorrow. While I have 17 more primed and ready to go, I think that I may work on a smaller batch of, say, 5 to 7 figures so that I can complete them over the weekend, get them based, and then take a final photograph for the blog.

I also grey primed eight of the Minden Croats (one of each pose) and will be tempted to paint a couple of these samples over the next couple of days so that I can see how they turn out. They are wonderful figures, as are all of the Minden figures.
Posted by Der Alte Fritz at 1:26 AM