The 200,000 Visitor Milestone Is Reached 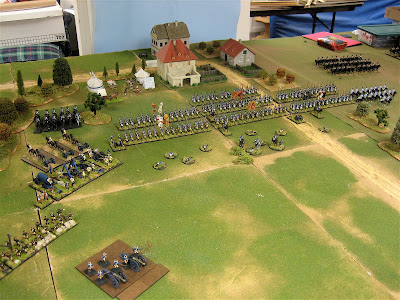 The Minden Prussian army turned out on the marchfeldt today to fire a salute in honor of the 200 thousandth visitor to the site today. Click on the pictures to view the proceedings up close. Double click for an even closer view.

At approximately noon today, Sunday May 9, 2010, the 200,000th visitor to this blog paid a visit to see what was going on at Der Alte Fritz Journal. I never imagined that this little blog would attract so many visitors in such a short time. I want to thank everyone for taking the time to look at my pictures and read my musings on the wargame hobby. I am honored to have so many wonderful readers. 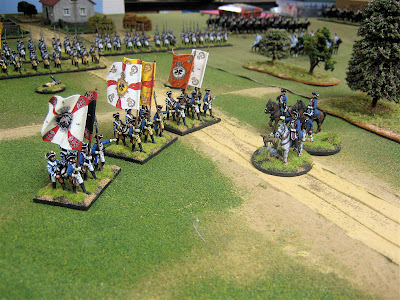 To celebrate the passing of this milestone, the color bearers of the Prussian Regiments (left to right) IR13 Itzenplitz, IR5 Alt Braunschweig, and IR1 Winterfeldt presented their colors to King Friedrich II and Major General von Winterfeldt on the marchfeld.

It seems that most of 2010 will be devoted to my Minden Project covering the armies of Austria and Prussian using Minden Miniatures 1/56 scale figures. As of this writing, I have completed 8 Prussian battalions and four sections of 12-pound artillery, plus a dozen Bayreuth Dragoons. I would imagine that if all goes according to plan, that I will begin to tackle the Austrian army starting in July 2010.

My latest addition to the Prussian army is the second battalion of IR13 Itzenplitz, which is pictured below. 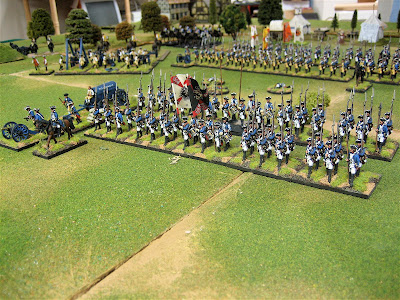 The complete IR13 Itzenplitz Regiment on review. I haven't added the flags for the second battalion yet, so I will not base the command stand until the new flags arrive. I like to Dull Kote the figures, but the flags are added after the Dull Kote is sprayed on so as not to fog up the flags.

I finished the second battalion on Saturday and prepared to base the battalion that afternoon. To my horror, I discovered that I did not have a set of GMB Flags for IR13 - second battalion, which would have two black flags. I was sure that I had some duplicates in my hoard of GMB Flags that I have accumulated over the past couple of years, but alas, no IR13. So I fired off an order to Grahame Black and hopefully the flags will soon be on their way, provided that darn volcano doesn't interfere with things again.

I really had a hard time getting this second battalion of Itzenplitz completed. The unit had been sitting on my painting table for a couple of weeks as I delved into creating vignettes. There is something about those all white facings that just didn't appeal to me. I prefer red or straw when it comes to painting Prussians. Oddly enough, Itzenplitz was one of the best regiments in the army, and it has a rather spiffy looking regimental flag - all in black, sure to strike terror into the hearts of the Austrians.

This evening I primed up 30 fusilier figures for IR49 and plan to start painting them this week. I also put together some of the pioneer figures so that I could increase the pioneer company from 2 to 12 figures, and also plan to add some more artillery labourers to my artillery park. So I have replenished my inventory of primed Minden figures and am ready to finish off the month of May with IR49 and a few other goodies for the table top.