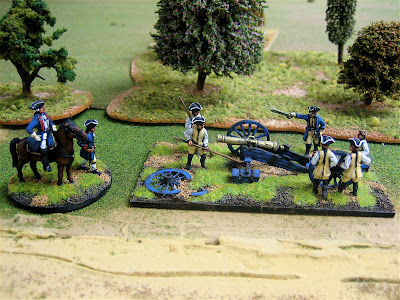 General von Winterfeldt supervises the replacement of a wheel on an RSM 12-pounder. Minden Miniatures "labourers" provide the muscle power. Click all pix to enlarge the view. 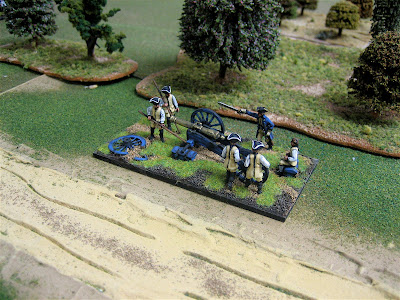 I finished off another Minden/RSM artillery vignette yesterday, as I continue to be inspired to find new ways to utilize the labourer figures in their waistcoats. The idea came from the Osprey book "Artillery Equipment of the Napoleonic Wars" which depicts a similar scene in that era. I simply cut a couple lengths of brass rod (North Star metal spears) and glued them into the hands of two figures to provide me with a couple of men using levers to hold up the gun carriage while the broken wheel is being removed.

Two other labourers are shown rolling the new wheel, probably taken from a nearby limber, into position so that it can be fitted onto the axle. A Prussian jager officer has been painted as a Prussian artillery officer (with his sword arm bent lower) to offer some supervision to the effort. And finally, I used one of the Minden wagon drivers as a spare crewman sitting on an ammo box watching the wheel replacement. 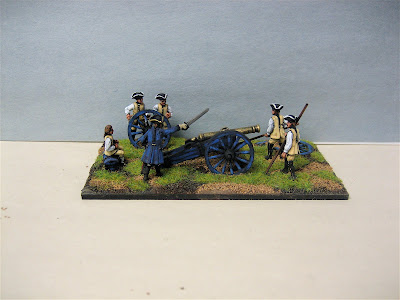 Reverse side view showing the two men rolling up the new wheel to place it on the axle. Two other crewmen use their levers to hold up the gun carriage while the spare is put on the axle. 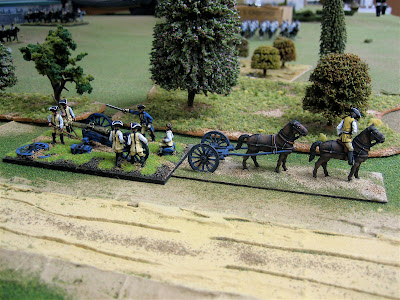 I've now added an RSM limber team to line up with the repaired gun. This gives you an idea of how well everything fits together. Eventually, I will paint new limbers for the RSM project and make the stands with all the same widths.

It all looks rather splendid when the vignette is placed "in situ" on the wargame table (see picture above). I plan to paint a new limber team on a similar base to complete the vignette. This particular limber is used in my BAR (Batailles de l'Ancien Regime) Prussian army. My Minden armies will have their own limber teams.

Update - Tuesday Morning - Preview
Now that I am getting more adept at using my pin vise, wires and putty, I think that my next generation of limber teams will have horses with small pins drilled into the harness (on the side of the horse's body) so that I can actually string some wire (depicting reins) connecting the limber trail to the horse harness.
This morning I have added a picture of the Prussian artillery park to give you a taster of what is to come from the workbench of Atelier Fritz. I've got a lot more ideas percolating inside my head and I can't wait to bring them to life. 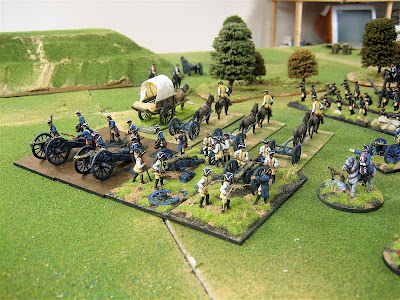 Here is a picture of my growing artillery park for the Minden Prussian army. I like the way that the basing on the stands really brings everything together. You really begin to get a sense of the movement and activity in the battery once you put all of the pieces together.

The inspiration for this comes from Barry Hilton's League of Augsburg site featuring his French Napoleonic artillery park. The two RSM guns are on the right, and two Berlin Zinnfiguren 12 pounders are on the left (unfinished bases). RSM limbers are behind the guns as well as a scratch built supply wagon that Ed Philips made from bass wood, Old Glory artillery wheels and assorted bits and pieces.
Posted by Der Alte Fritz at 8:06 PM