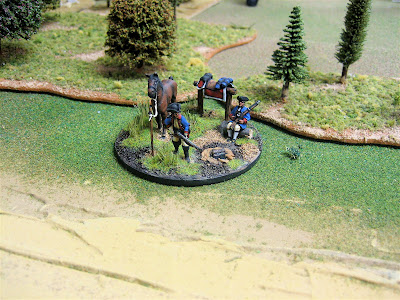 
I bet that you did not know that Minden Miniatures makes dismounted Prussian dragoons for the Seven Years War, did you? I would bet that Frank does not know it either. Well, they don't make dismounted dragoons, but when I was looking at some of the Prussian jager figures, I found one pose in which the hands and rifle cover up the belly box for cartridges. Everything else looked like dragoon equipment to me, from cavalry boots to aigulettes on the shoulder. All it would take to convert the jager to a dragoon was to paint it light blue, instead of dark green. 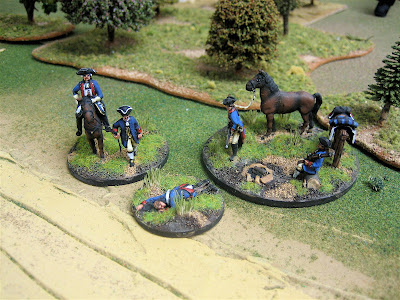 My previous general vignette, plus a Minden casualty figure on round base, and the dragoon vignette are all tied together by a common basing and terraining system.


Following up on my idea of using the Minden wagon drovers as soldiers sitting around the campfire, I decided to take one of the drovers, wearing a tricorn, add an RSM banded musket, and voila! I had a seated dragoon as well. And after cutting off the reins for the general vignette, I was now an old hand at converting horses with reins to horses without reins, and thus I hit on the idea of depicting a dragoon horse tied to his grazing stake while his owner was taking a short rest from the war.

I had some extra saddles and shabraques from a Mirliton Miniatures of Italy Napoleon Russian cuirassier. Fortunately, both shabraques are squared off instead of having rounded edges. So this was a near perfect fit for a Prussian dragoon shabraque. I filed down the underside of the saddle with a rat tail file and fitted it on top of a wooden hitching post that I made from a wooden fondue stick (you can buy these at the grocery store). I also drilled small holes in the bottom of each post, where it would attach to the base, so that I could insert some metal pins to make the hitching posts more secure when I glued it to the base. The piquet stake that the horse is tied out to is simply a spare piece of metal rod (formerly a North Star spear) that I had in my spare bits box. The rope is made from two pieces of florists' wire that I twisted together to make it look like rope.


So now all of the elements came together: RSM standing horse, Minden jager painted as a dragoon, and a Minden drover painted as a dragoon. The accessories included an RSM banded musket for the seated dragoon, and a Mirliton saddle from their Napoleonic range of figures. For a final touch, I built a little fire with bits of twigs and surrounded the fire pit with some Gale Force Nine rough talus rocks.

I really liked the way that this vignette turned out. I can place the stand somewhere on the table for reconnaissance duty where it won't get in the way of the game. The hitching post for the saddle has given me some ideas on a larger cavalry vignette that I would like to try one day. I can envision a hitching post with about four saddled (made of paper and putty) or unsaddled horses. There might be a water trough or else some of the Minden pioneer figures could be moderately converted to be carrying buckets of water (bucket from the Minden artillery tools sprue), or shoveling hay or manure or maybe even combing out the horse with a brush. 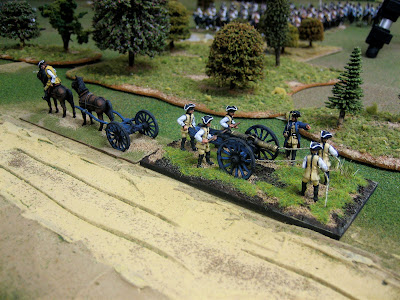 A picture of the completed artillery crew vignette after application of the static grass.

I wanted to post a picture of the artillery dragmen "en bricole" showing how the model looks after the static grass and dark ink have been added to the base. The previous day's pictures only showed the base with uninked gravel. The final basing really shows off the model to good effect and demonstrates how elegant these Minden Miniatures really are. Nothing else on the market looks quite as good as a well painted Minden. I mean Holy Cow! Those guys look so real. 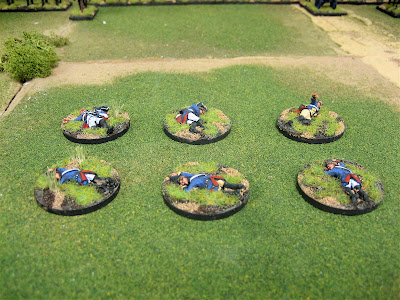 I decided to go with the one inch round bases for my casualty figures. The round base gives me more room to enhance the base with extra tall grass (bits of sisal scrub brush), rocks, hats, drums or what have you. So save all of those bits and pieces that you clip off of other models and save them in your bits box. You never know when they will come in handy.


For my next conversion project, I plan on taking an RSM Prussian general and cutting off his right arm so that I can make a new arm that is pointing off into the horizon. Since his new arm will be pointing off at a forty-five degree angle, it was also necessary to twist the figure's head off to its right so that it is looking in the same direction that it is pointing. I sawed off the arm this evening and drilled out a new hole in the arm. Then I clipped off a piece of an old North Star spear to 12mm, bent the piece in the middle to show where the elbow will be, and then I glued the wire armature onto the body. Once the glue dries, I will attempt to build a new arm and hand with green epoxy putty. This is my first attempt at a major figure conversion such as this. Hopefully, the sculpting part will work out OK and then I can paint the figure and get it based. Wish me luck!


It is 1:00 AM on Monday morning and I finished my general conversion. The arm was relatively easy, but shaping and sculpting the hand was a problem for me. I finally got the glove hand to be "good enough" and called it quits. Since I had plenty of green stuff left over, I also made an officers sash around his waist outside the coat, added a bow to the horse's tail, and enhanced the general's pig tail a little bit. I will have to let the putty dry for a day or two before priming it and painting it. I'm looking forward to seeing how the figure looks when it is painted. Off to bed now!
Posted by Der Alte Fritz at 10:50 PM