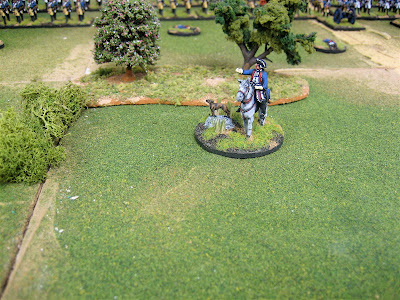 Marshal Schwerin and his dog Otto. (click pix to enlarge).


I finished painting my conversion of the RSM Prussian general on Friday and got the basing completed yesterday. As you may recall from my report of the other day, I had lopped off the right arm of the figure and manufactured a new arm with green stuff and a wire armature. I wanted to turn the stand into a little vignette, so I added one of the dogs from the Eureka set of Frederick the Great playing his flute. The hound seemed to be about the right size in proportion to the RSM figure. I glued the dog onto a rock, and then filled in the base with epoxy putty, then painted both the dog and the rock. It seems a bit like hauling coals to Newcastle to paint a rock, but it was necessary to hide the putty and blend the dog's base in with the rock. 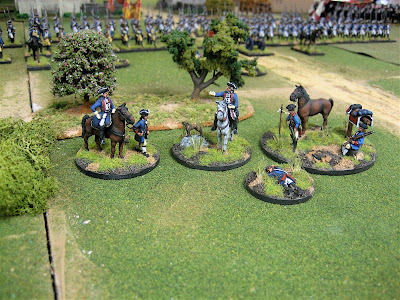 Pictured above, you can compare the original RSM Prussian general to the converted model and see the difference. The foot figures are all from the Minden range of Prussians, so you can see how compatible the two ranges are.


I spent the past couple of days at the Little Wars Convention in Lincolnshire, a suburb of Chicago. On Friday night, I was part of the War College panel of wargamers discussing how to put a good convention scenario together. We had a good informal conversion with about a dozen interested bystanders and I may put together a separate post at a future date and go through the main elements of convention wargame scenarios.

I did a fair amount of shopping too and came home with some nice goodies. I found a vendor who was carrying the complete range of Ral Partha/IWM paints and scooped up about three bottles each of black (they make the best black paint in the world, bar none), white, red, dark blue, brown and dun. Rich Smethurst, who used to own Ral Partha, is now carrying the old line of paints again, which is terrific news. The Partha paints always had a little bit more plastic or acrylic like substance in them which made the finishes more durable and they seemed to provide better coverage than any other paint that I have used. I don't have my notes with me right now, but I will post an address for contacting Rich if you are interested in these excellent paints.

I found a miniatures company called Tiger Miniatures that makes 19th Century Colonial figures in a sort of Perry style. I picked up a couple dozen German Seebattalion figures to represent Hesse Seewald in the 19th Century, in our upcoming Mafrica Campaign. I also bought some US Marines to augment my force of Redoubt Marines as well as what turned out to be Canadian Mounties, which I will use as mounted command for my Marines. I talked Bill Protz into buying some of the Bulgarians, who were kitted out like Russians. Now Bill can have a Russian adversary serving as military advisor to the Khan in Tranjipour. Bill also bought a small escort of mounted and foot Bulgarians, again these looked like Russians.

On Saturday, Bill, Randy and I ran a BAR version of Fontenoy, in 1745. Once again, the French defeated the British army.This time, however, the French trounced the British very badly. In fact both wings of the French army were enveloping the British center by the end of the game. It was a good game, but a very one sided victory for the French. I will post more pictures later in the week. 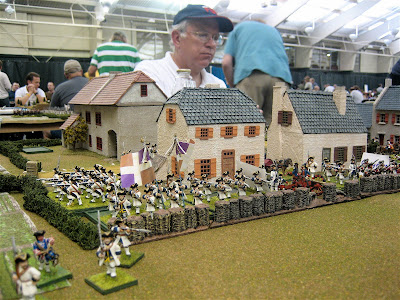 Bill Protz oversees the defense of the town of Fontenoy. The buildings were all made by Herb Gundt, hedges by K&M and I have no idea who makes the gabions.