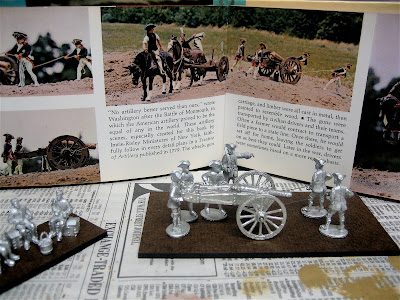 
This evening I was looking at some of the Minden 18th century pioneers/work crew figures that I received about a month ago and was trying to think of some different ways of using the figures. Drawing on a book full of pictures of miniature soldiers, I found one of my favorite pictures: an American Revolution artillery crew man handling their field gun into position with muscle power and bricoles (drag ropes). You can see the actual pictures in the background, along with my attempt to recreate the scene with the Minden pioneers.

I should also mention that the limber team and driver looking over his shoulder (Imrie-Risley 54mm figure) was copied exactly by Steve Hezzlewood when he sculpted the same set for the RSM or Pax Britannica range of figures. So that part of the vignette is virtually handed to me on a silver plater via the RSM95 range of figures.


I placed a few of the pioneers around the cannon as if they were lifting the gun trail. The immediate problem is that none of the figures are really suitable for this purpose. For one thing, all of the figures are facing to the right and I would either need one figure facing to the left, or one figure that could stand perpendicular to the gun trail with his hands down at his side or slightly in front of him. If the figure were looking straight ahead, then we would only need one pose to complete this diorama. Some of the other figures are readily usable to depict the matrosses dragging the gun with ropes, or bricoles. Here it is a simple matter of cutting some florist's wire and running the wire threw the figures hands and attaching the other end of the wire to the wheel axle.

A couple of the other figures are passable if they are posed around the gun trail, but I would have to do some serious figure converting to move the arms and hands into the right position so that two figures could be carrying a bar between them, with the gun trail resting on the bar. I may give conversion a try and lop off some arms and rebuild them with green epoxy putty. It could be interesting. To finish the scene off, I added an Austrian infantry officer pointing and giving direction to the crew. This figure could be painted Prussian view to "convert with paint". The Prussian jager officer is another Minden candidate for the job. 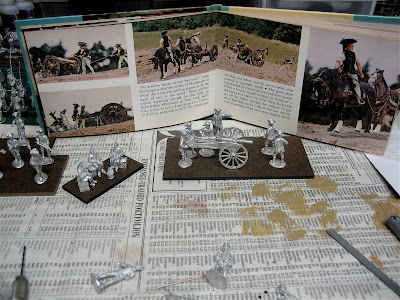 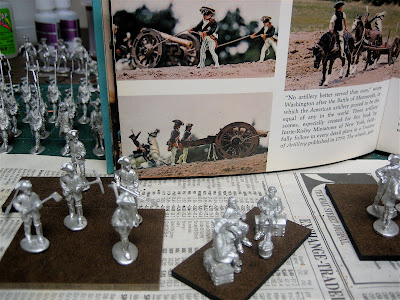 Pioneers (left) and some slackers sitting around the camp (right).


Next, I looked at some of the wagon drivers that Frank had made and I envisioned them sitting around a camp fire or something similar. I plan to cut some logs from twigs found in the back yard and create a camp scene with the figures. As a temporary thing, I used some artillery chests from some French Napoleonic guns that I had laying around.

Finally, you can see some of the work crew with their tools, as they were intended to be used. I could also see them holding bakery tools to use in my field bakery vignette. One could also place artillery tools in the pioneers' hands and instantly you have an artillery crew working in their waistcoats, having shed their jackets. So there are many uses for these figures, beyond their employment as pioneers.

And last but not least, I found employment for some of the horse holders that Frank added to his range. I have one man holding the reins of an officer's horse that I will use as a command stand. I took the RSM Prussian officer and standing horse, trimmed off the reins, and drilled a small hole through the lower part of the horse's snout to accomodate the florist wire/reins that were being held by the servant. I primed this set this evening and the blackened figures don't show up very well, so you will have to wait until I apply some paint to the general and his servent tomorrow night. It should look pretty nifty.