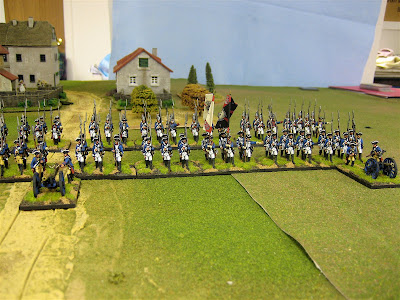 IR13 Itzenplitz regiment - first battalion, with two Minden 3-pound artillery in support. The gun models are from RSM95. Flags are from GMB Designs.


I was going to post some of these pictures last night, but my camera battery died and needed to be recharged. This is the first battalion of the Itzenplitz Regiment, numbered IR13 in the Prussian establishment. This was a Brandenbourg regiment and Frederick the Great rated it as one of the best regiments in the army. During the Seven Years War, the regiment was usually a part of "the King's Army" and thus fought at Lobositz, Prague (it missed Kolin), Rossbach, Leuthen (where it distinguished itself as part of the spear-point of the attack as part of Wedell's advance guard), Hochirch , Kunersdorf, Liegnitz, Torgau and Burkersdorf. 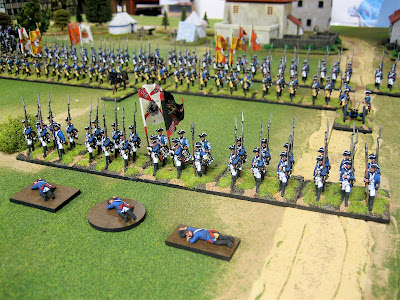 Minden's new casualty figures are shown in front of IR13. Please leave a comment in the Comment section at the end of this entry and let me know which wooden stand looks best for the casualty figures: (1) large rectangle, (2) small circle, or (3) narrow rectangle. I am trying to decide which size stand to use with this collection. Each time a stand is removed from the game, due to casualties, I will place a casualty stand on the table.

Christopher Duffy states that it was a tightly run regiment, known as the "Donner und Blitzen" regiment under the regime of Major General August Friedrich von Itzenplitz, who was mortally wounded at Kunersdorf. In 1768 it was given the unique privilege of being rated immediately below the Garde and number one among the senior regiments of the army, regardless of the seniority of its chef.


Tsar Peter III was briefly made the regiment's honorary inhaber in 1762, until his demise in a palace coup orchestrated by his wife, the future Catherine the Great of Russia. The regiment's station was in Berlin. It wore a blue uniform with white facings (cuffs and lapels and collar). Duffy gives the regiment straw colored waistcoat and breeches, but Bleckwenn and Dorn & Englemann depict the regiment wearing white breeches and waistcoat. I have chosen to use all white in my version of the regiment. In my mind, Hans Bleckwenn trumps all other sources. 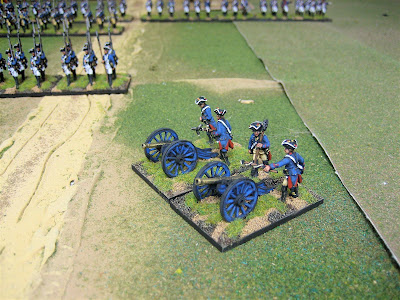 
I plan to have one battalion gun with each regiment of two battalions in my Minden army. The artillery crew men are Minden Prussians and the 3-pounder is from RSM. RSM sells them as 3-pounders, but in fact they are really 20mm French Napoleonic 12-pounders. You can tell by the extra notch in the trail, which was used to reposition the gun tube when the cannon was travelling attached to the limber. The stand is the same size as my infantry battalions: 40mm wide by 60mm deep. The infantry stands are turned with the long 60mm edge facing front and thus having a 40mm depth when used for infantry. I also have a stand that is 40mm wide by 80mm deep that I will probably use for limber teams. There seems to be a certain consistency using the 40mm measurement that sort of ties everything together quite nicely.

Casualty Stands
One of the pictures above features three of the new Minden generic casualty figures on three different stands: rectangle- large, circle, or small and thin rectangle. I cannot set up a poll in this blog, so please kindly click on the comments box below and cast your vote or opinion as to which size stand you think looks best for the casualty figures. I will eventually terrain and grass these bases, but for now I wanted viewers to see the choices before I made a decision.
Posted by Der Alte Fritz at 8:09 PM