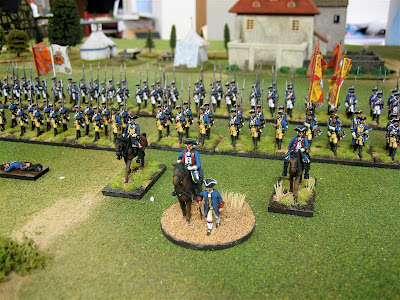 Prussian brigade commander (RSM) and his attendant (Minden) is holding the horse's reins. Minden Prussian colonels are shown in the background for comparative purposes. Click the pix to enlarge the view.


This evening I painted a new command stand in between innings of the Chicago White Sox vs Toronto Blue Jays baseball game. The general and horse is from the RSM95 range and the horse holder is from the Minden range. I think that the two ranges match up nicely.

I began by cutting and filing off the reins on the RSM standing horse and then drilling a hole completely through the horse's muzzle about where the reins would be positioned. I did not want to mess around with super glue and felt that wire run through a hole in the muzzle would give me the strongest bond of wire to horse. I used florist's wire for the reins. The Minden horseholder on foot completes the command vignette by holding the reins while the general surveys what is happening on the battlefield. The Minden figure has a dimple in his fist that guides the pin vise that one uses to drill out a hole in his hand. The wire was then glued into the hand of the horse holder. I glued both pieces to the round wood base prior to priming with black primer. 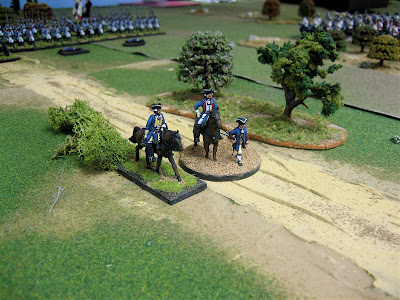 Another view of the command stand plus a Minden Prussian colonel shown for comparison. 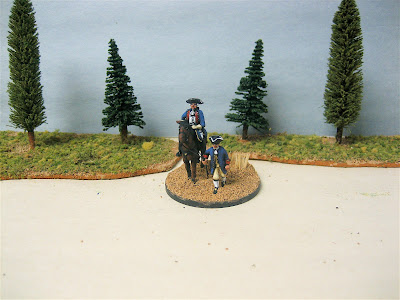 And finally, a shot of just the command stand.


I applied the mixture of spackle compound and brown paint to the base, cut off a few pieces of sisal from a scrub brush to depict tall grass and then dipped the base into a jar of fine grit or railroad ballast. I will then allow the base to dry overnight (although it is very hard within 3 to 4 hours). Tomorrow night I will apply a coat of dark brown ink to the base, leaving a few spots bare so that the original light brown ballast can show through. Then a quick dry brushing of GeoHex Tan paint and the base will be ready for the final application of static grass.

I rather like the way this base turned out. Both figures were easy to paint and having the servant holding the general's reins looks pretty nifty, if I say so myself.


I hope to start on the "Bricole - artillery vignette" this weekend and maybe work on another base showing a dismounted dragoon with his horse tied to the wooden stake that dragoons and cuirassiers carried with them. I plan on using one of the Minden Prussian jagers as a dismounted Prussian dragoon. This is easy enough as the jagers wore cavalry boots and have aigulettes on the shoulder. I will simply convert the jager to a dragoon "with paint" and do no other conversions. There were several Prussian dragoon regiments that did not have lapels, so the foot jager will work just fine.

Decision finalized on the shape of the casualty stands
I decided to use the one-inch round MDF base for my casualty figures, unless the figure does not happen to fit onto that particular base. I want to thank everyone who left their comments on this choice on my blog. I liked the rationale that the round stand looks a little different from all of the other square and rectangular stands in the battalions and that the round shape instantly tells you that the figure is not part of a unit on the table. As a plus, there is enough room on the round stand to add little accoutrements here and there.
Posted by Der Alte Fritz at 11:41 PM