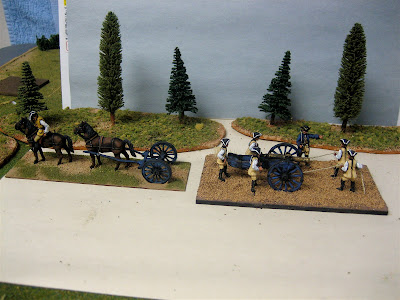 
I completed the painting and the first stage of the terraining of my artillery vignette this evening (although it is now nearly 2 AM in Hesse Seewald so I will keep this post short). The crew consists of five of the Minden pioneers painted as Prussian artillery crew working in their shirt sleeves and waist coat. An Austrian officer, painted as a Prussian, provides some direction to the men. I will ink the bases and add the static grass this afternoon. 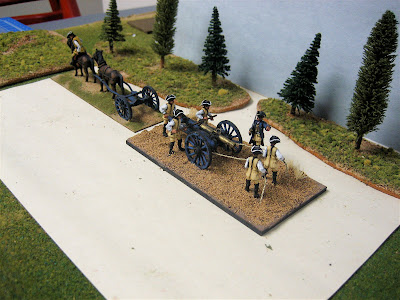 I cut a piece of wire and drilled holes through the trunions on the gun trail to serve as pole used for lifting the gun. The two fellows holding the pole required some minor conversion involving the moving of their hands and a slight twisting of their head. The two men with the drag ropes were unalterd. I used two strands of florists' wire twisted together to simulate rope. 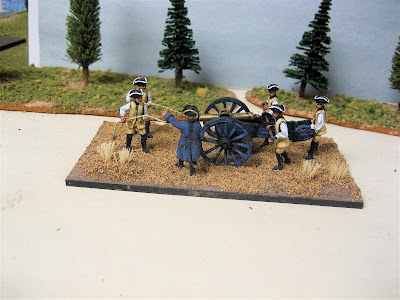 A closer view of the two dragmen and their ropes. 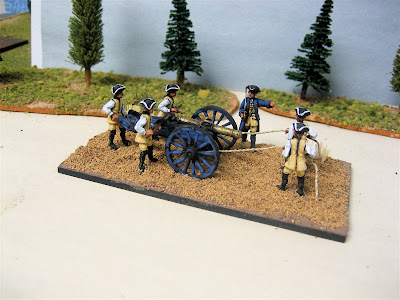 The reverse view of the picture preceeding this one.


I had to draft a Minden Austrian officer into the Prussian army because I was running out of Prussian officer castings and I wanted to place one officer on the stand. The Austrian pose with the officer pointing was exactly what I was looking for. His cuffs are too big and I should have filed them down, but I was in a hurry to get my first gun model completed and photographed. The next time I will file the cuffs of use the Minden Prussian officer holding his sword in both hands.


I am off to bed to get some much needed sleep. This was a fun vignette to work on and was relatively easy to do. The main conversion was taking one of the pioneers and cutting his right arm away from his body so that I could position him better for holding the lift pole. He is the fellow on the left side of the gun as you are facing towards the barrel. I will certainly do a similar vignette for the Austrians at a later date.
Posted by Der Alte Fritz at 1:58 AM