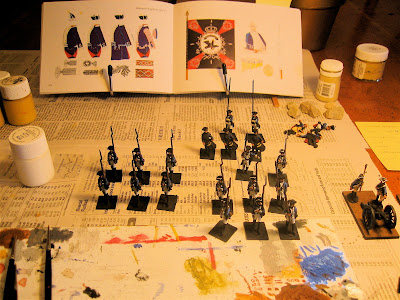 My temporary painting table is still our dining room table, due to the flood. I just haven't moved things back to the basement yet. I've got my copy of Bleckwenn in front of me for uniform reference and 19 infantry figures on the table. This was taken last sunday. You can see the regimental artillery piece and crew on the righthand side of the picture.

When you are feeling blue and in a grand funk, there is nothing better to pull you out of it than to pick up a box of Minden Miniatures and start burning up your brushes. That is exactly what I did this week as I began work on the third regiment in my Minden Prussian army for the SYW. I have selected IR13 Itzenplitz as my next regiment.

Itzenplitz is adorned in white small clothes, white lapels, collar and cuffs and has red turnbacks. I have tried to select regiments that have some noticeable differences so that I can distinguish which unit is which on the table top. IR1 Winterfeldt has white small clothes and red facings and thus is a rather generic looking regiment in the army. IR5 Alt Braunschweig has distinctive straw colored small clothes and facings with red turnbacks. So I can readily identify the regiment by its straw colored facings and breeches. Itzenplitz is predominantly white, so it too is easy to pick out at a glance.

I have completed 18 of the 30 figures so far, for the first battalion of the regiment, and hope to have the remaining 12 figures done by the end of this weekend. Hopefully, I can get them based quickly and take some photographs for posting in the middle of next week.

Last weekend, I painted a few "quickies" consisting of four Prussian artillery crew and two 3-pounders which I will use as regimental artillery pieces for each of my regiments. I chose to use the same 60mm by 40mm MDF base for both the infantry stand and the regimental guns, only I turn the stand on its vertical axis so that it has a frontage of 40mm. Each gun will have two artillery crewmen. So I can churn battalion gun sets out fairly quickly. For the 3-pounders, I use the RSM 3-pounders, which in reality are their 20mm Napoleonic French 12 pounders which they also sell as 25mm 3 pounders. It sounds odd, but they actually work quite nicely.
Posted by Der Alte Fritz at 12:24 AM