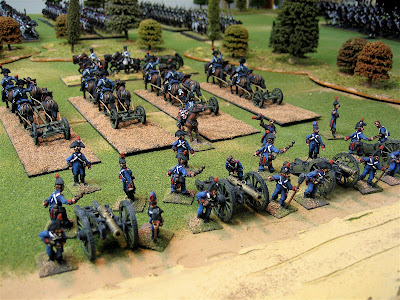 What do you do when you have the big game table set up and no game to play? Well, you set up some figures for a photo shoot. So that is what I did this afternoon. Click the pix to enlarge the view and check in on the progress that I have made with my French army circa 1806. 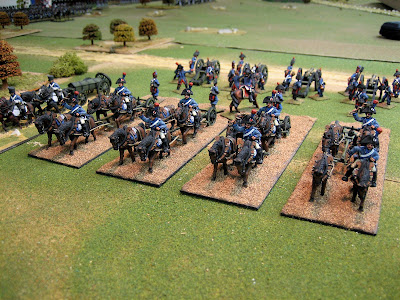 French limbers deploy behind the firing line. I will eventually add more supply wagons. You can see an Essex French caisson on the left side of the photo.

Eventually, the French artillery battery will have six artillery pieces (4 x 8pdrs and 2 by howitzers) and a limber for each gun model. I may add some unharnessed caissons and position them directly behind the artillery piece, followed by the limber models. Yes, they take up a lot of space on the table top. 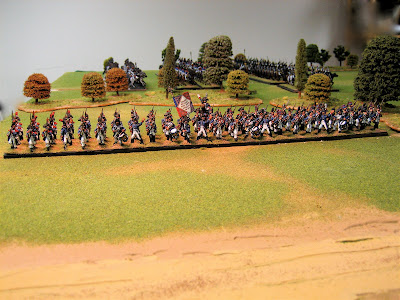 French battalion deployed into line. Skirmishers are still attached to the parent battalion. 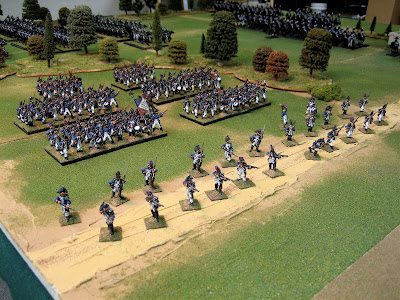 Both battalions of the 12e Regiment de Ligne deployed in column of divisions with the two voltigeur companies deployed forward to skirmish.

OK, here's the nub of it all. Take a closer look at the picture above and try counting all of the figures that comprise this "cloud of skirmishers". One regiment can deploy up to 24 skirmishers by sending out the two voltigeur companies that are in the regiment. Now you start to get a feel for how this might have looked to French opponents. There are scads of them coming right at you, followed up by two columns of infantry.

Now multiply this picture by a factor of two because you will command a brigade of 2 regiments or 4 battalions and you will be able to throw out a skirmish screen of four companies from each brigade. That is 48 voltigeurs screening the advance of your brigade. This is why I like to wargame at 1:10, especially for Napoleonic wargaming. 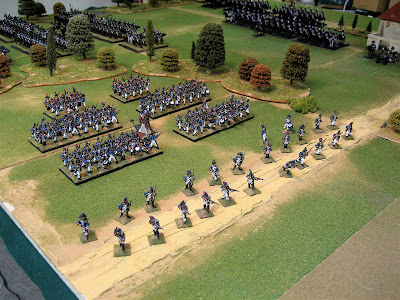 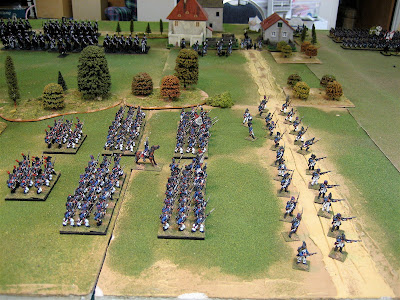 Here you can see the intervals between the "grand divisions" that comprise the French column. There is enough of a gap to allow for a speedy change of formation to square, to repel cavalry, or to deploy into line so that the maximum number of muskets can get into the fire fight. The voltigeurs would then fall back and take their place on the left flank of each battalion. The grenadiers are always found on the right hand flank of the column or line. 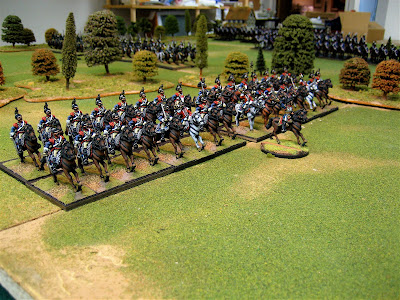 The heavy French cavalry, epitomized by the spectacular cuirassiers, now arrive on the field and prepare to finish off the opponent or provide a shock attack on their battle line.
The cavalry is still very much a work in progress. I have painted 40 dragoons and 32 cuirassiers and 24 chasseurs a cheval for the French, so far. I want to have a lot more light cavalry since I will be wargaming at the brigade and division levels. Hence, not much need for heavy cavalry at this point. On the otherhand, who could resist painting some of the fashionable cuirassiers and dragoons in the French cavalry establishment? I for one, could not resist the temptation.