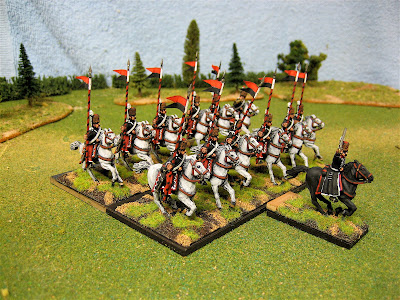 
I completed the basing of the squadron of Bosniak lancers in the service of Milady de Winter last evening, and on a whim, I decided to add some lance pennons to give them a more finished appearance. I used some GMB Designs lance pennons for the Napoleonic Dutch Lancers of the Guard, but altered them by painting the white half of the pennon black. I thought that the black and red coloring was more in keeping with the de Winter livery of the same colors, plus the color scheme mimics the actual patter used by the Bosniaks during the SYW (sans the FR royal cypher - I kept my pennons plain).

I also completed three more von Kliest dismounted horse grenadiers to use in our light troop game tomorrow, in case the commander of the von Kliest Frei Korps wants to employ his cavalry in the dismounted fashion. That is up to him, of course. 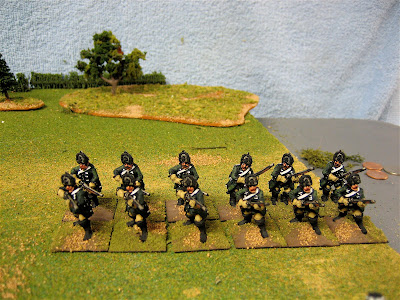 A slightly blurry picture of the dreaded von Kliest dismounted horse grenadiers. It was a pain to paint these figures and I had to force myself to complete them. I nearly lost my will to live while I was forcing myself to paint the von Kliest figures. Now I won't have to look at them for another year, after tomorrow's game. 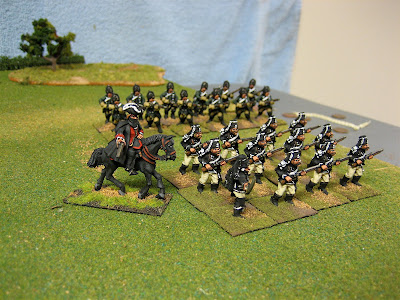 Dismounted Foundry Black Hussars in the foreground and Foundry von Kliest figures in the background. The Evil Colonel Bauer commands the de Winter Black Legion of cavalry, infantry, pirates, and eventually, a battery of horse artillery. Bauer is from Foundry's Highwaymen range of figures.


Well, I'm off to the basement to start packing up the figures that I have to transport up to Brown Deer tomorrow for the game. Bill Protz has designed an interesting scenario and I am looking forward to seeing how things turn out. Will Milady de Winter finally capture her nemesis, Lady Diana Pettygree? Stay tuned tomorrow to find out and see for yourself.

I am rather surprised that nobody caught my comment about the commencement of the Minden Project, shortly. Feel free to post any comments or questions by clicking on the comment tab below.
Posted by Der Alte Fritz at 10:50 PM