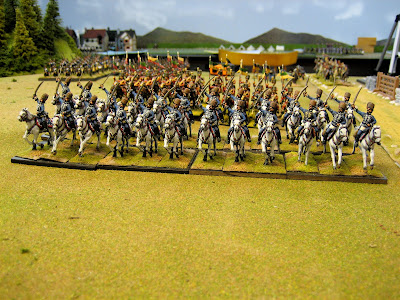 It was Saturday December 5th - Leuthen Day to those in the know. So I had a fairly good feeling about the outcome of today's "Light Troops Game" at Chez Protz in Brown Deer, Wisconsin. I was expecting a large-ish skirmish type game, so imagine my surprise to find 14 players and a large game featuring over 2,000 miniatures. One must learn to adapt to the circumstances of the day. Keith Leidy and I were in charge of the Western Zone of the table, which was divided into three zones: Western, Centre and Eastern Zones. The two flanking zones featured predominantly light troops, while in the centre, a traditional linear SYW battle took place between an allied force of Russians, Swiss and Saxons in French service, and French regulars versus the Prussian army, commanded by Marshal Schwartzberg. 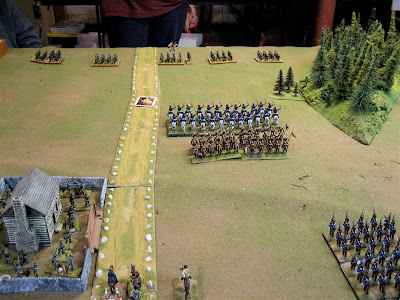 The initial view of the Western Zone from the Prussians' point of view. Light cavalry moves forward to confront the French light infantry (Fischer's Chasseurs).

We were told that the visibility would be restricted during the first two turns, due to the morning fog. So I sent out two squadrons of Zieten Hussars to clear the way and trip any ambushes that the perfidious French might have layed. Keith backed them up with two squadrons of his own Bosniaken Lancers (Hinchcliffe SYW figures from the collection of Phil Robinson in the UK). 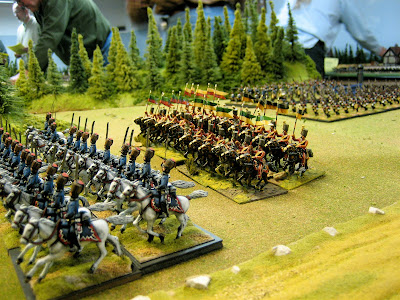 The Prussian light cavalry was backed up by two battalions of Prussian grenadiers: Jung Billerbeck (5/20) and Heyden (19/25) plus two companies of jagers and two squadrons of Puttkamer Hussars (HR4) and two 6 pounders. Our mission was to punch a hole through the French line and facilitate the safe passage of a certain VIP riding in a black coach, escorted by Black Hussars and Black Bosniaks. Hmm, I wonder who that could be. The VIP had to exit the table on the French edge for reasons that were not given to us (on a need to know basis, of course). 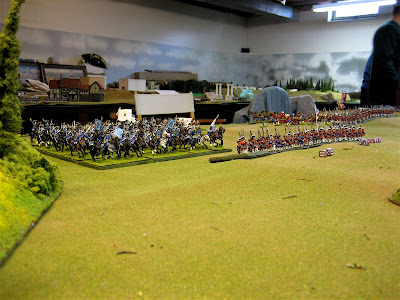 There was an "allee" that connected the Western zone to the Centre zone and it was positioned to the right flank of our Prussians in the Western zone. As we advanced in our sector, we could see some Saxon cavalry and Swiss infantry passing the exit area of the wormhole. 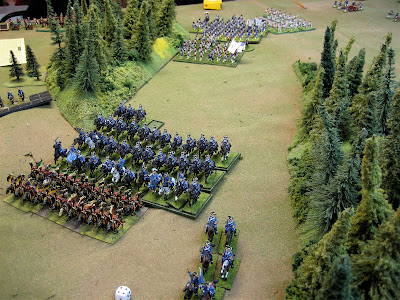 The Saxons decided to advance into the Allee and strike the Prussian right flank in the Western Zone. We had actually considered doing the same thing to the Saxons, but that was not a part of our orders so we let it pass. Keith quickly moved the Zieten Hussars and his Bosniaks into the Allee to confront the Saxon von Bruhl Dragoons. Here you see a squadron of von Bruhls pursuing the defeated Zieten Hussars, while the remainder fight the Bosniaks. 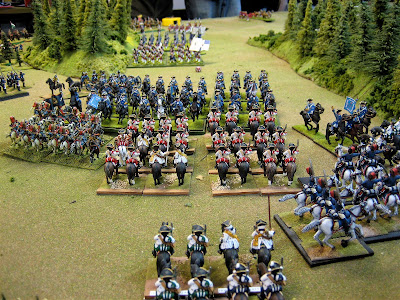 Prussian reinforcements arrive in the form of 4 squadrons of Hanoverian dragoons (white coats - Front Rank figures), the Zieten Hussars which rallied and returned to the melee, and the escort squadron of Bosniaken for General Keith. The overwhelming Prussian numbers proved to be too much for the Saxon dragoons, who lost all of their colours and fled back up the Allee. 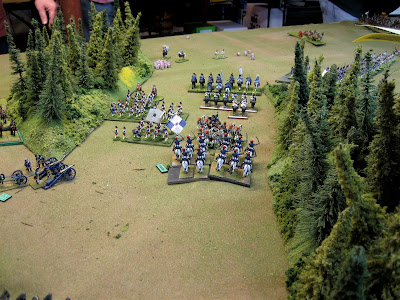 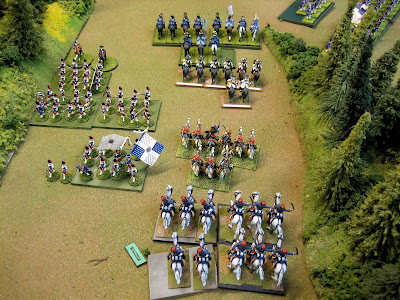 Overhead view of the Prussian pursuit. After each melee, the loser rolls a D6 to see what speed he runs away at, while the victor rolls a D6 to see if he pursues. If he pursues, then he rolls again to determine the speed. The Saxons bolted away at the canter, while the Prussians followed them at the gallop. If your momentum hits the rear of a routing unit, then the router is "evaporated" and removed from the field. The victor occuppies the router's ground and halts.

Meanwhile, back to the infantry fight... 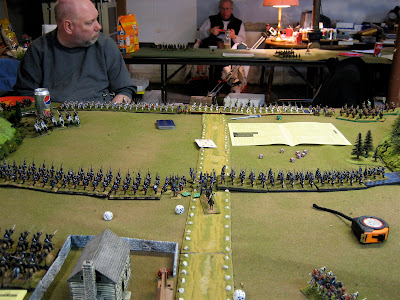 Don Perrin commands the French infantry and observes the two battle lines forming up for the fight. 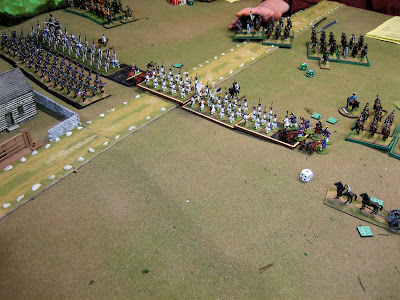 Alas, the French gain the upper hand and rout the Jung Billerbeck grenadiers (on the right of the Prussian line) and then advance to finish off the left hand Heyden grenadier battalion, which begins to fall back to the safety of the farm enclosure. 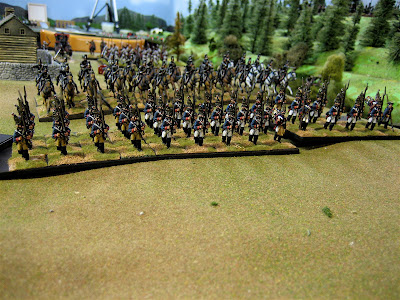 The French remember that their orders are to defend this zone, and realize that they will lose many men trying to root the Heyden grenadiers out of a walled enclosure. So they fall back to wards their table edge, and Heyden and the Black Hussars advance to pursue and open the road up for the black coach. 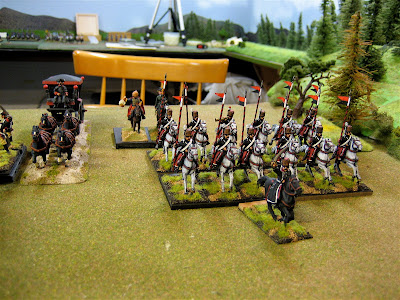 Lady de Winter's Coach and Bodyguard of Black Lancers (Crusader Bosniaks) advance behind the Prussian infantry attack. Milady was expecting to find the Gallian spy, Lady Pettygree in this vicinity, but it turned out that Lady Pettygree was in fact, miles and miles away in the Eastern zone. Rest assured that someone will have to pay for this misinformation. One does not cross Milady de Winter without consequence. 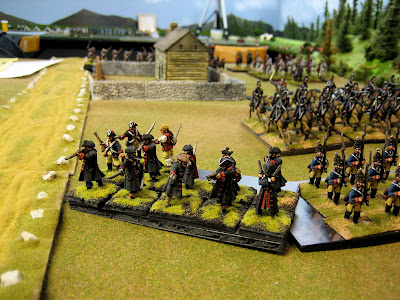 A company of de Winter's "Regulators" are attached to the Heyden Grenadiers to protect their flank from the Fischer Hussars, which are milling about the battlefield. 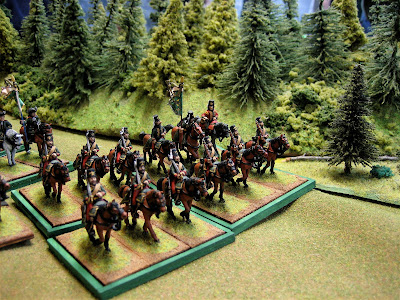 Eureka Saxon hussars painted as Fischer Hussars. Painted by Randy Frye for his own collection. 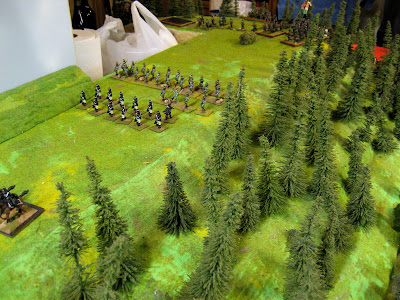 While the firestorm of battle was playing itself out on the plain below, some Prussian jagers and dismounted Black Hussars engaged in a bit of kleine krieg atop the wooded Protzen Heights, or Protzberg. The French Fischer Chasseurs pushed the jagers back and back until they ran away. Meanwhile, the Black Hussars moved to the right, descended half way down the hill, and cleared a path for Milady de Winter to cross the Protzen Heights unnoticed with two of her followers. The French fell for the ruse of watching the black coach and assuming that Milady was in the coach. She who fights and runs away, lives to exact revenge on another day.

We had fun time playing this game, as Keith and I faced off agains Don and Randy and virtually ignored all of the events that occurred in the Centre and Eastern battle zones. Save for the brief threat posed when the Saxon cavalry and two battalions entered the Allee, we were too busy to notice that the Prussians were crushing the allies in the centre. By the end of the game, both sides were fairly played out with respect to their remaining forces. I don't know whether the Prussians could have pushed through to the French table edge or whether the French would hang on and hold the road. It would have been close either way.

Coming Soon: Der Alte Fritz's Christmas Sale
I will be posting some items for sale from my own collection of SYW and ECW figures that I plan on divesting. Come back tomorrow for the first listing of Foundry SYW battalions and cavalry regiments. These are all 20 figure units suitable for a more sensible style of wargaming, as opposed to our mega-sized BAR battalions. Later in the week, I will also post some BAR sized SYW battalions that are going on the auction block.
Posted by Der Alte Fritz at 6:46 PM