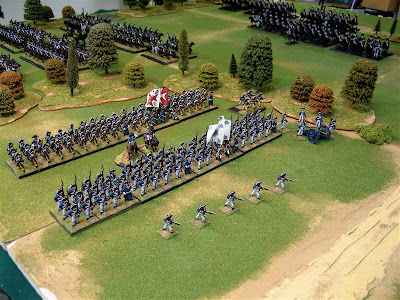 A brigade of 1806 Prussian infantry, featuring IR23 von Winning in the foreground, supported by IR19 Prinz von Oranien in the background. Additional supports include a 6-pound battalion gun and two five-man groups of scheutzen to provide some skirmish capabilities. All figures are Elite Miniatures.

We rescheduled the play test game for the 1806 Project for Tuesday December 29, 2009 at Schloss Fritz. Bill Protz and Keith Leidy will provide the opposition and probably command the French forces (8 battalions, a battery of 6 guns and 3 cavalry regiments). They might have as many as 10 battalions, depending on how the game ebbs and flows.

I will command a mixed force of Prussians (6 battalions, 6 guns and 3 or 4 cavalry regiments) and some Russians (2 battalions and maybe 4 horse artillery pieces). I was busy basing up the Russians this evening, gluing them to their 3/4 inch square bases and then affixing them to magnetized movement trays, holding 12 figures on five stands.

I am looking forward to seeing how the the new changes to the BAR Napoleon rules work out under game conditions. We have adopted the "Breakthrough" concept from In The Grand Manner with respect to infantry versus cavalry melees; i.e. the two do not melee, they simply roll dice to see if a breakthrough is affected by the cavalry. The infantry will not be able to make any saving throws for casualties caused during the breakthrough process. So this provides the infantry with a significant incentive to form square.
Posted by Der Alte Fritz at 11:32 PM