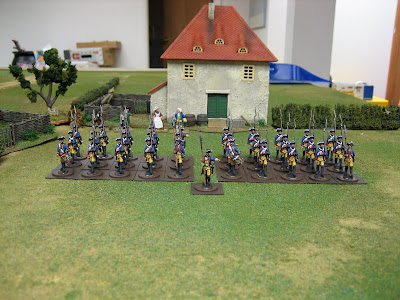 Minden Prussians (IR34 Prinz Ferdinand) that eventually went into my BAR army as a 60-figure battalion. This gives you somewhat of an idea what the smaller 30 figure battalion will look like, except that the figures will be deployed in 2-ranks instead of 3-ranks. These were painted back in 2008.


I started working on my "Minden Project" for 2010 this evening with the cleaning of the figures with rubbing alcohol and the gluing of the figures onto temporary cardboard bases for the priming and painting process. I did the same with a dozen Prussian artillery crewmen. Tomorrow night I will prime the figures with black primer and tuck into them over this coming weekend.

So what exactly is the Minden Project, you might ask. It will consist of two armies: Prussian and Austrian scaled at a 1 to 20 ratio of figures to men. This means that my battalions of infantry and my cavalry regiments will have 30 figures. These figures will not be used for BAR rules/games, but rather, will give me a core set of 12 battalions and 4 cavalry regiments per side that I can use for either solo wargaming at home, or for smaller convention games on the road. I think that participation players want to get in a game that will be over in 3 or 4 hours, so it is my intent to keep the armies on the small side. Furthermore, I already have SYW armies at 1:10 (more than I can possibly use at any one time) and 1:30, so why not fill in the gap with 1:20?

Given my painting production, it should be relatively easy to build up the armies as 12 of these units are the equivalent of 6 BAR sized 60 figure battalions, and I know that I can easily paint 60 figures, or two battalions worth in a month. Maybe 3 or 4 units in a month if I'm really pushing the production into overdrive.

Organizationally, the figures will be based in a conventional 2 ranks with 6 figures per stand and five stands, for a total of 30 infantry figures. I have decided to paint both battalions of a Prussian regiment (60 figures per regiment) and also paint a separate mounted colonel for the regiment. Each stand will have about a 3/4-inch frontage per figure or close to 60mm wide. Georgo Bases happens to make a 60 by 40 stand from MDF wood and these will have a nice finished look to them. The first battalion will have the liebfahnen and the regimentfahnen while the second battalion will have the two colored regimental flags. All flags will be GMB Designs, as these are simply the best flags on the market.

The Prussian army will consist of the following items:

Each brigade of 4 musketeer battalions will have two Berlin Zinnfiguren 12-pounders with complete limber teams and either RSM or Front Rank horses pulling the limbers. The grenadier/Garde brigade will have a pair of 7-pound howitzers.

The cavalry contingent will consist of the following:

Minden already produces the Prussian cuirassiers and Frank Hammond has just announced that he has received the greens for the Prussian dragoons. I have a lot of painting ahead of me so I am not too worried about the availability of hussars just yet. I could always add another dragoon regiment or switch over to the Austrians for awhile. One possibility is to paint the dragoons in white coats for the War of Austrian Succession period. That would be a different look for my Prussian dragoons. It might also give me a reason to one day paint some of the Eureka Saxons that I bought and fight Hohenfriedberg and Kesselsdorf in 1745.

As usual, the Austrians get the short end of the stick -- I have not given much thought to what I would have in my Austrian army, but needless to say, its composition shall be similar to that of the Prussians. I received a shipment of Minden Croats this week and I am really keen to paint them too. I will probably build up a core of 4 to 6 Prussian battalions and then switch over to the Austrians for awhile. Now I rather wish that I didn't have 60 Minden Austrian infantry super glued onto US pennies for my BAR army. Maybe the old "stick them in the freezer" trick will work and I can pry them off of the pennies and paint them for my Minden Project army. Or I could just order more Austrians.

So that summarizes my Minden Project to some degree. I will start on the first two battalions over the Christmas holiday and hopefully will have the first regiment of Winterfeldt painted and based for all to see.
Posted by Der Alte Fritz at 12:09 AM