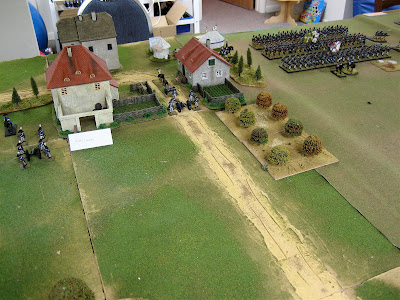 Prussian forces defend the town of Altenzaum. Click the picture to enlarge the view.


We had to postpone today's play testing of the BAR Napoleon rules at Schloss Seewald today due to the weather conditions and a series of unfortunate events that seemed to plague all of the participants. Hesse Seewald eventually had twelve inches of snow today, which would have made travel very difficult. So we postponed the game around 9AM after several conference phone calls.

As for the events, Randy's father was in the hospital, my back was aching rather badly, but it was still serviceable (and I'm happy to report that the basement is completely dry now) and then later in the day, Bill reported that his son was ill and in the emergency room. Mrs. Fritz had to rush off to the ER as well for a condition, but fortunately things turned out well for her. Finally, I heard that Stokes Schwartz's wife, the Grand Duchess, had a nasty fall down the stairs in Stollen Central. It seems that bad news was hitting everyone here in the midwestern US.

Meanwhile, the basement was sufficiently in good order and so I allowed myself a little bit of painting time to make up for all of the hard work on Christmas Day. I hauled out some Minden Prussian musketeers and started applying paint to the first battalion of 30 figures that will eventually comprise the IR1 Winterfeldt Regiment. Since I have most of this week off from work, I hope to be able to finish the first battalion this week, get based and flagged, and ready for a photoshoot by the end of the week.
Posted by Der Alte Fritz at 11:19 PM