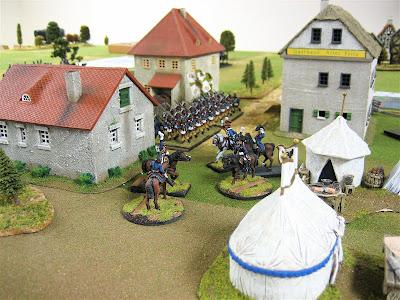 General von Schmettau, division commander of the Prussian army, meets with his staff in the village. Buildings and tents by Herb Gundt. Figures are mostly Elite Miniatures, except for von Schmettau and the hussar ADC which are from the Foundry range.

Keith, Bill and I did a moderate sized play testing of the BAR Napoleon rules on Tuesday afternoon and I was pleased that some of the important changes seemed to work under actual game conditions. The outcome of the game did not really matter as we were mostly interested in trying a few things out, being less concerned about winning or losing the battle. 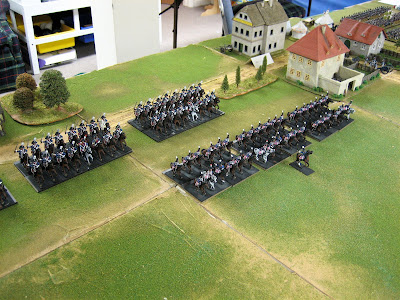 Brigade of Prussian dragoons: DR3 von Winning (Elite Miniatures) in the front line and DR5 Koningen (Imperialist Miniatures) in the second echelon. I haven't had time to base the dragoons yet, so they are still in black primer on metal stands. 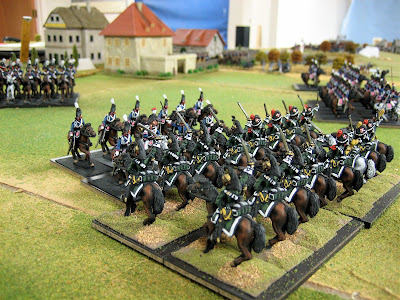 Prussian (left) versus French (right) dragoons encounter each other in melee. 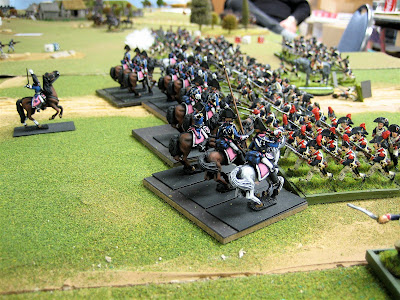 Two squadrons of von Winning Dragoons attempt to break through a French battalion in line.

The cavalry versus cavalry melee rules are basically the same as thosed used in our SYW BAR rules, so there were no big changes here except for a few modifiers to reflect the different types of troops. The cavalry melees went off without a hitch.

The biggest change though was cavalry versus infantry melees: we borrowed an idea from In The Grand Manner and employed the "breakthrough" rule, i.e., cavalry does not melee with infantry, it only determines whether or not it can break through the infantry. So Bill obligingly kept one of his French infantry battalions in line, while I charged two squadrons of von Winning dragoons into his line. Bill still had his first fire bonus of +5, which really stung the Prussian dragoons, but they passed their morale check and barreled into the French line of infantry. Now I had to roll three D6 and get a score of 10 or better to break through the line. Alas, I rolled a combination totaling "9" and so I failed to break through the infantry line.

We then assumed that the dragoons had succeeded in breaking through and assessed the damage to the infantry. Initially, each cavalry figure breaking through killed one infantry man (with no saving throws for breakthrough casualties). We decided that this let the infantry off too easily without enough of a penalty. So we bumped up the casualties to "two" infantry for each cavalryman passing throught the line and liked these results better. The French line took a morale check, and failed, therefore routing away. The dragoons rolled pursuit and failed to pursue or else did not want to pursue, I can't recall which one. At any rate, we rather liked this phase of the game and will keep it in the rules.

The infantry skirmish rules seemed to work well. We just roll a D6 and assess the damage on short, medium and long range fire with scores of (4,5,6), (5,6) and (6) required to hit, respectively. This was easy to do as far as we were concerned.

Here are a few random pictures from the game: 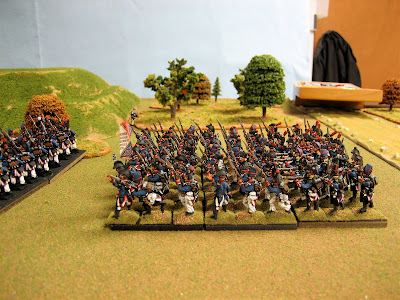 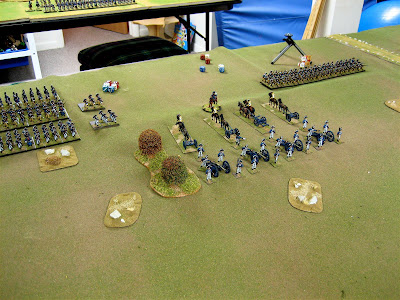 Bill's brigade of French infantry - these are mostly Dixon figures in bicorn. 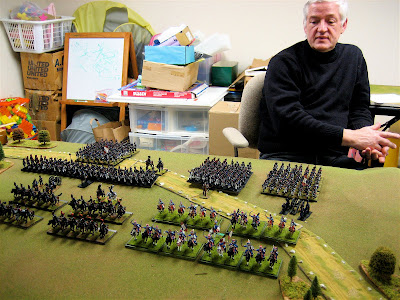 Keith's infantry brigade is preceeded by a light cavalry brigade, an example of combined arms attack in the Napoleonic era.

Well, that is all for now. I have a few little things to tweak in the rules, but I think that they will easily handle a larger battle once we get more figures painted. I had six battalions of Prussians, two dragoon regiments, one cuirassier regiment, and two SYW hussar regiments recruited into the 1806 army for this game.

The French had 8 battalions, one dragoon, one cuirassier, one chasseur regiment and some drafted SYW French hussars in mirliton.