What Is A Skirmish Game ? (and All That) 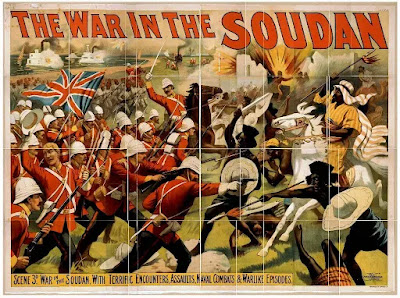 Upcoming Projects In The Queue

There is nothing like a new project to dust the cobwebs out of your mind and to leave the unpleasant baggage behind you. That leads to the question: what is next on Fritz's wargaming plans? I'm not exactly doing something entirely new, but rather, embellishing some existing projects that were on the back burner while I got ready for Historicon 2022.

The Sudan Project:  My recent purchase of the Cigar Box "Rattlesnake Ranch" or desert cloth mats is what is driving my renewed interest in war games set in The Sudan. During the pandemic lock down, I probably painted around 350 to 400 Armies In Plastic Beja, Dervish and Egyptian figures of 54mm size. I built my version of the town of Khartoum to give my figures something to fight over and my storming the walls of Khartoum game was a lot of fun. The Cigar Box mats improve the visual appearance of my Sudan games and so I'm eager to take this game to a higher level and perhaps stage it at Historicon in 2023. To that end I have ordered more plastic Beja warriors so that I can increase my Beja contingent from 100 figures to 200 figures of foot soldiers. I also want to increase the size of my Egyptian infantry so that I could possibly field a full army of nothing but Egyptians (and no supporting British troops).

I have a lot of ideas about terrain which will allow me to place mountains and hills atop the game mat, or underneath the cloth for gentle elevations. I made such terrain for my Historicon game using a hot wire knife and I was starting to get adept in its use. I bought several more carving tools at Historicon and I'm looking forward to cutting up chunks of two-inch thick pink foam board to make the mountains in 54mm size.

I have a couple other sneaky ideas in the terrain and accessories category, but I plan to keep these secret until  I can develop it further.

The Great Prussian Raid Into Poland During the SYW: The Prussians launched several sizable raids into Poland during the Seven Years War designed to disrupt the Russian Army's supplies and logistics systems. It seems that this problem continues to vex the Russians to this very day. The object of the raids was the Polish city of Posen, where the Russians had substantial food , forage and gunpowder magazines.

General Wobersnow led an incursion into Poland during the Winter of 1758-59 with 7 battalions, 25 squadrons, and 12 heavy artillery pieces. This seems like a reasonable number of figures to put on my game table, hence my interest in doing something completely different.

Ziethen led a larger raid of 20,000 troops into Poland in June/July of 1761. His corps consisted of 24 battalions of infantry, and 47 squadrons of cavalry. This is a much larger army than the one of 1759, but it provides me with a number of scenarios that allow me to use my Minden Russians without having to play the standard battles (Zorndorf, Kunersdorf, Paltzig and Gross Jagersdorf).

My Prussian forces already exist and so my painting focus will be on adding more Russian light cavalry and Cossacks.

Hannibal Versus Rome  - This project will likely go onto the back burner as I focus my attention on the other two projects. Primary needs are some more Roman cavalry, a brace of war elephants, more Roman Triarii, and a few other pieces. There are also plans for 54mm naval wargaming.

Some Thoughts About Games At War Game Conventions

I know that some of my blog readers will be a bit disappointed that I am not going whole hog into a massive Seven Years War project. But quite frankly, my convention experience at both Little Wars in April and Historicon in July make me think that SYW games are not well received at American wargaming conventions. In both instances, I had a superb looking game that was second to none, however, I couldn't get people to sign up for the games in the numbers needed to move around all of the available figures in the game. Perhaps it would be best to host SYW games at the Seven Years War Association Convention and then go in different directions for shows that do not have the narrow focus of the SYWA

I think that the large big games are a no go at today's war game conventions and have become something of a dinosaur in this era. Or maybe we should narrow it down and say that large Horse and Musket/Black Powder Era games are not as popular as they used to be. Based on my observations at Little Wars and Historicon, WW2 large games still seem to attract players. I dare say that WW2 is probably the most popular period of wargaming today.

Finally, Science Fiction and anything with zombies is a sure bet for attracting an overflow of participants to your game; however, I refuse to host a game that has zombies, vampires or space marines in it.

Sharpe Practice - Is It Really A Skirmish Set of Rules?

There has been a lot of buzz about the Sharpe Practice (SP)  set of rules from Too Fat Lardies (TFL) in the UK. Whenever someone on TMP asks for recommendations for a good set of skirmish rules, it seems that fifteen thousand people come TFL has done an exceptional job of promoting its rules, so kudos to them.

Given all of the buzz and excitement over these rules, I gave them a try at several conventions and really questioned whether these were actually skirmish games. I played in a Jacobite Rebellion scenario and it seemed that there were way too many figures on the table, all in established units of 18 to 24 figures. I think that I had at least three units of this type under my command. My memory is a bit foggy on this. There was a distinct absence of "role playing in the game" and was disappointed by that missing feature. There was really nothing in this particular SP game that said "skirmish game".

Is this a case of "The Emperors' New Clothes Syndrome"? In other words, have we been told so many times that SP is a skirmish game that we all feel compelled to believe it because gosh darn it, everyone else calls it a skirmish game. We become too embarrassed or lack the self confidence to go against the flow and be the only person who says "wait a minute, this doesn't seem like a skirmish game".

I ask these questions because I am looking for something that will "grab" people and make them want to sign  up for my games. SP seems to be popular and there are people who want to give the rules a test drive in live game conditions; and there are a lot of proponents of SP that will seek out games that feature these rules.

What Is A Skirmish War Game?

I don't have definitive sense of what constitutes a "skirmish game", but I know one when I see it. In my mind it is a game with a small number of figures under your control. Maybe you have one or two character figures and a few minions under your command and you are given a mission for the game. Accomplish this mission, and keep other players from accomplishing their missions, and you win the game. A good example of this is the Wild West gunfighter rules, of which there are many, but Desperado comes quickly to mind. You have two gunfighters under your command so there is no margin for error in doing anything that brings peril to your figures.  You get shot and you are quickly out of the game. Reminds me of The Hunger Games. I always feared "the sucking chest wound" whenever I played in a Desperado game hosted by Tom Kelley. LOL.

I saw a number of these types of games at Little Wars and Historicon so I'm thinking that low number of figures and small game is very popular these days.

However,  I like to play with a few more figures than two or three, so I'm looking for a set of rules that has up to ten or twelve figures under each players command. As an aside, why is the number "12" so popular in war games? I could see maybe stretching the number of figures in your war band up to around 20 figures, but anything more gets us out of my percieved definition of a what a skirmish game entails.

I am sure that there are as many definitions of "skirmish game rules" as there are war gamers on the planet. There is no right or wrong answer here. I am just present my opinion on this matter.

I will continue to look for a set of skirmish rules that I can use for the Horse and Musket Era.