One of my favorite places to visit for wargaming terrain is the Petco national chain store of pet supplies. The aquarium aisle is loaded with all sorts chotchkes and niknaks to decorate fish tanks and reptile terrariums. For example, resin treasure chests, sunken Spanish galleons and rock caves could all potentially find a use on the wargamer’s table. In the past I’ve found a Greek temple ruin, an Egyptian Sphinx and Burmese statue heads. Other items such as plastic plants can be turned into desert or jungle vegetation. Kitty litter is a good material for making stone walls. The list goes on and on.

So yesterday I was looking for some cork bark to use in the making of some mountains for my Sudan Project. Lowe's and Home Depot let me down with regard to finding any large chunk pine bark, but there was a Petco store across the street from HD so I thought that I might as well stop in and see what I could find. While I could not find any bark (used to line terrarium floors), I did score a couple of great finds in the Turtle Area Aisle of the store.

The first item was a turtle platform that looks like a large mesa-like rock structure. I plan on repainting it in more desert like colors for the Sudan. The second piece, a jagged rock formation spire, is also perfect for what I am looking for in off the shelf Sudan terrain. Again, a coat of red-brown paint and some dry brushing of highlights will turn the spire into a nice desert terrain piece.

Here are several pictures of the Petco terrain "in situ" on my game table. The game mats are from Cigar Box Battle Mats. 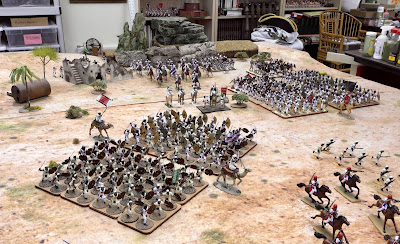 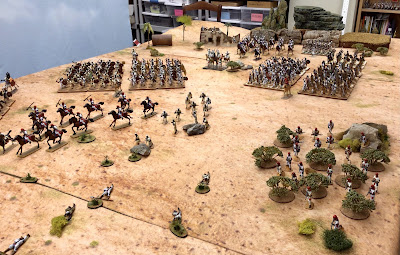 The number of artillery crew poses in the Armies In Plastic figure range is rather limited, so I started examining some of the Egyptian infantry figures to see if any of them would be suitable for conversion work. I found a pose where the figure is running or lunging - a pose that I consider useless for close order troop formations - and decided that I could repurpose the figure into an artillery crew man by removing his rifle and replacing it with either a ram rod or a trail spike. I already had ram rod poses, so I used the charging figure for this conversion. It was a simple matter to cut away his rifle and then drill holes through the hands so that it could hold a length of wire (an off cut from a North Star spear that I saved for a rainy day). I mixed up a bit of green stuff epoxy putty and fashioned the end of a trail spike to put on the wire. The raised foot was a problem, so I placed a ball of putty underneath the raised foot and then fashioned the putty into a tree stump. I am waiting a couple of days for the green stuff to dry, after which i will spray prime the figure, paint him, and spritz him with a gloss coat finish.

I hope to finish off another ten Beja warriors today and then wait for the arrival of Beja reinforcements in tomorrow's mail. My original plastic Beja contingent was 100 warriors and my plan is to increase that to 200 figures. Thus each Dervish player will command 100 figures divided into two 50 figure units.

I have three Egyptian infantry companies of 16 figures each and my plan is to increase the regiment to four companies, or 64 figures in total. Then I will paint a second Egyptian regiment of Sudanese troops. This will give me enough Egyptian infantry to form a giant square with 32 figures on each side of the square and then two Gatling Guns on two corners of the square. Three squadrons (already painted) of Egyptian Lancers (3sqs by 12 figures per squadron) provide support for the infantry. This will be my finished Egyptian Army for my Sudan Project.