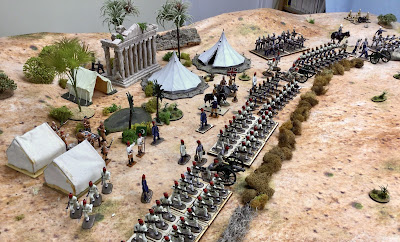 A couple of Bell Tents arrived yesterday, made Britains for their Zulu War figure range, and I immediately sent them to the Egyptian outpost in these pictures. I was gobsmacked by the size of these tents whose diameter is 8-inches. They take up a lot of real estate to say the least, but they look good.

This past week I have been painting Sudanese regulars in the Egyptian army and I have two companies of 16 figures (32 figures total) completed as of this writing. I am using the same Armies In Plastic Egyptian figures, but give them dark skin, blue trousers, tan fezzes, and green collars and cuffs. I can't confirm whether or not the uniform colors that I've used are accurate. I went by the color scheme of some Trophy of Wales Sudanese troops. 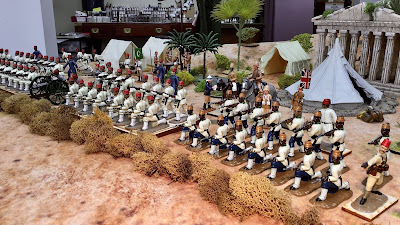 The uniform distinctions that I have painted will make it easier to identify Egyptians from Sudanese on the table top. For now, I use movement trays that hold 8 figures in two ranks (4x2 =8) and two trays equal one "company" of 16 figures. I have three companies in a regiment (16 x 3 = 48 figures) for my Egyptian Army regiments. Eventually I might increase the size to a total of 62 figures (16 x 4 = 62). This compares to Mahdist war bands of 60 to 100 figures. 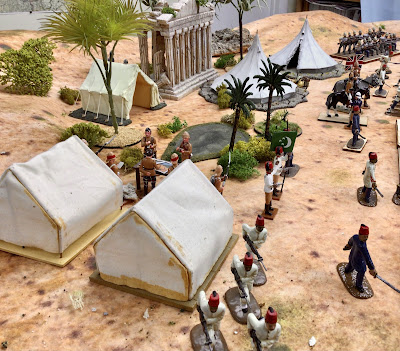 The next issue, to be discussed at a later date, is how many figures should comprise a "square" of Egypt