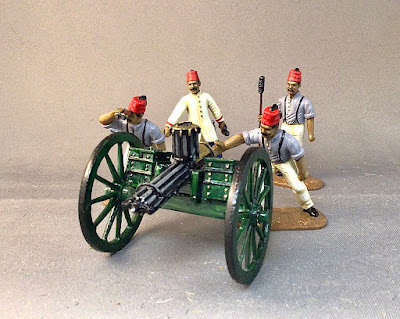 My growing Sudan  collection of 54mm plastic figures from Armies In Plastic started with an Egyptian infantry regiment of three companies of 16 figures each. Anyone can game with the battle winners ( British army) but I wanted to have Egyptian regulars fighting the Dervish. In addition the 48 infantry figures, plus 5 command figures, and 36 of the old William Britain’s hollow cast Egyptian Lancers, I decided that I needed some Egyptian artillery.

So I decided to convert some of the AIP British artillery crewmen into Egyptian artillerists with a simple head swap. This entailed removing the British heads and replacing them with fez covered heads that I’d lopped off of some spare Egyptians. I used some of the “useless poses” such as the running figure or the “I’ll bash you over the head with the butt end of my rifle pose.”

The heads are easy to remove with an Exacto Knife. I then make a pin cut from a piece of a North Star spear ( see, there’s a reason to save all of those off cuts from you are trimming down the length of the spear or flag pole). Next step is to drill holes into the head and the torso, fit the pin into the torso, test the fit of the head to torso, and then glue the head and pin into place.

Here is a picture of the Egyptian artillery crew after the head swap conversion. 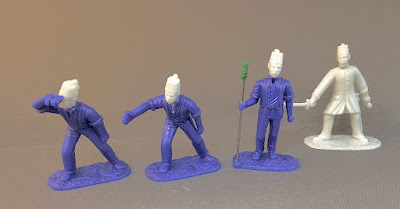 Here is the crew painted and ready to man a Gatling Gun. 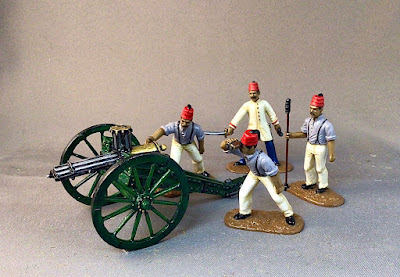 I’ve had to assume that the Egyptians have removed their tunics before setting to the task of operating artillery equipment in the hot desert sun because AIP only provides the British figures in short sleeves I don’t know what type of shirt they would have worn underneath their tunics, but it’s not unreasonable to imagine that they’d wear European style shirts. So I gave them white trousers and grey shirts. The officer wears his tunic.

I’m rather pleased with how nicely this simple conversion worked out and so I will do some more crew conversions to man a Krupp cannon. Below is a picture of the plastic AIP Gatling Gun that I painted. Originally I was not going to paint any of the artillery equipment, thinking that the paint would not hold up well to handling. However, as long as I had some new Egyptian artillery crew why not give them a painted gun too? 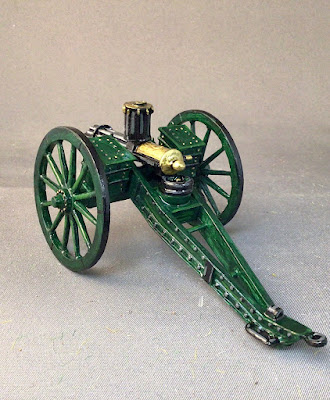 I painted another crew figure holding Gatling Gun canisters plus another GG and a Krupp cannon model.

I have added a new item on the sidebar shown on the left side of my blog page. It will track the number of the 54mm Sudan Project figures of that I have painted in 2022. As of today, the total number of new figures painted since I returned from Historicon is 36. Keep an eye on this sidebar and watch the size of the armies growing every day. Note that these numbers do not include the painted Sudan figures that I had painted prior to July 2022.