I decided that my army of Beja warriors needed to have a mounted leader to command them. Who better to have than Osman Digna?

Osman Digna was probably one of the best military commanders of the Dervish armies of the Mahdist War (1881 to 1899). He was a follower of The Mahdi in Sudan, although some speculate that he joined the cause because the British-run government in Egypt banned slavery, and Osman Digna was a notorious slave trader.
He was a member of the Haddendoa tribe of the Beja people in eastern Sudan along the Red Sea. He raised his first army around 1883 and immediately started causing trouble by attempting to capture Suakin, the largest Sudanese port city on the Red Sea. He later captured the fort at Suakin in the same year.

Osman Digna is probably best known as the one who wiped out Valentine Baker's (Baker Pasha) Egyptian army at the Battle of El Ten in 1883. This caused Britain to send an army under General Graham to the area to rescue the situation and regain control of the area for Egypt. Graham defeated Osman Digna's army at the second Battle of El Ten, but with great difficulty. That was followed by the Battle of Tamai, in which the Beja army broke a large British square and nearly won a great victory. 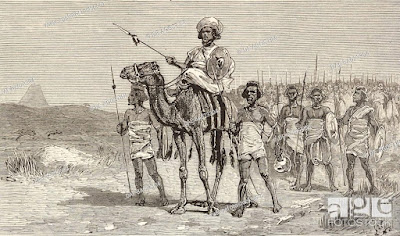 Neither Armies In Plastic, Britains, or John Jenkins Designs make a 54mm figure of Osman Digna. In fact, non of them make any personality figures as far as I know, which is a shame. That being the case, it was clear that I would have to make my own figure.

So let's get on to pictures of my conversion of an Armies In Plastic figure into Osman Digna.

The picture above (and below) compare the original Dervish cavalrymen with the converted figure.
First I cut off the wicker shield from my figure with a sharp Exacto knife (is there any other kind?) and shaved down the army and fist with the sharp blade. Next I cut the head off of a Beja foot soldier, did the same with the cavalry figure, and simply swapped out the turban clad head for Beja head.
The next step was to cut off the sword blade of the cavalry figure, making sure to leave the hilt of the sword on the figure. I took an off-cut piece of a North Star spear and trimmed it to the desired length, and then pounded it flat with a hammer and a small anvil. I drilled a hole through the hand and inserted the piece of wire to finish the sword conversion.
So far so good, but something looked a little bit off on my conversion: the left arm/hand was kind of hanging out there doing nothing. So I decided that Osman Digna should be holding the reins of his horse. I drilled a hole into the hand stump and likewise drilled a hole through the snout of the horse. Then I cut a length of florists wire and threaded it through the hole in the horse's snout. I centered the reins wire so that both ends converged at the figure's hands and threaded this wire through the hands. 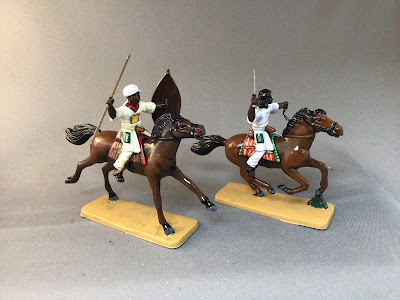 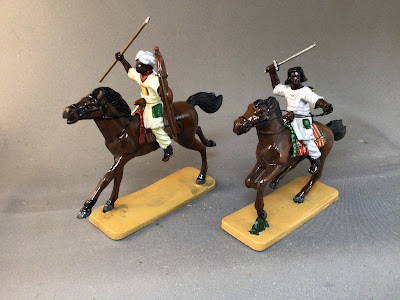 The end result was a very dynamic pose for Osman Digna, heroically waving his sword with his right hand and pulling up on the horse's reins with his left hand.

The figures were then primed with Vallejo spray primer, painted with acrylic paint, and then sealed with a couple of coats of gloss coat sealer. I think that 54mm figures look better with a gloss coat. I did a little extra painted detail work on the saddle cloth to make the figure look more important than one of the rank and file warriors.

I also did a special paint job on another Armies In Plastic cavalryman so that I could have a leader of my Ansar contingent of the Mahdi's army. I haven't given him a name yet, but I'm sure that somewhere is the name of all of The Mahdi's subordinate army leaders. The Mahdi himself did not take a part in the fighting because he was the leader, prophet and The Expected One. 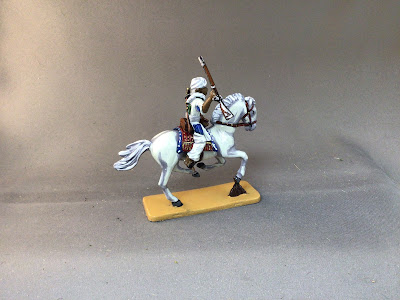 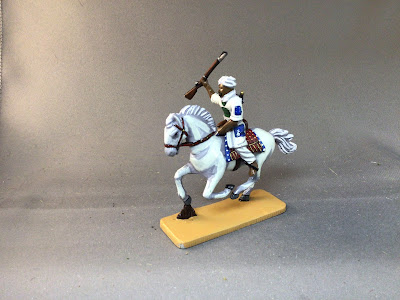 So this week I finished painting ten more Beja, 5 more Egyptian artillery crew, one British artillery crew, the two mounted Mahdist leaders and one extra rank and file cavalry warrior. I have another ten Beja on the painting table and this afternoon I primed 32 Egyptian army regulars. The latter will be painted as one of the Sudanese regiments in Egyptian service.