British Camel Corps Arrives, And HOW! 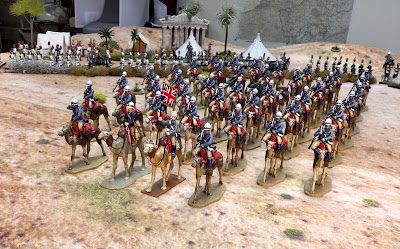 CLICK PICTURES TO ENLARGE
Yesterday I finished 12 more 54mm Armies In Plastic British Camel Corps figures. I now have 40 mounted Camel Corps ("CC") figures and 4 pack camels. My goal is to paint 60 CC and 8 pack camels for my Historicon 2023 war game. The idea is to have one mounted CC figure for each dismounted CC figure that I have.
So what does one do when one suddenly has 40 large 54mm Camel Corps figures? Why we have a parade! 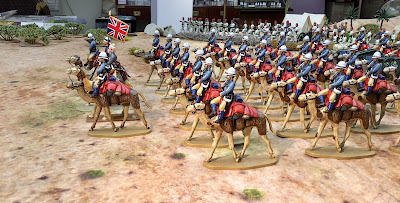 I added two Trophy of Wales metal Camel Corps command figures: the officer in the blue tunic and the gentleman carrying the colors. I have them formed up seven across in six rows. Here's the Director's Cut photograph, showing some of the behind the scenes set up:
More to come within a few weeks. I have reordered another dozen or so CC figures from AIP this week. I wonder if I should dress some of the figures in red coats?
Posted by Der Alte Fritz at 12:52 PM