The other day I was in between painting projects, waiting for the primer to dry on some figures that I planned to paint, so instead, I started playing around with repainting some of the old Britain's British Mountain Artillery gun and crew. What caused this was the need to paint a "bat man" to accompany a personality figure (me) that I am sending off to Fort Rexford, which is under the command of the delightful Claude B. I have about 20 of the Mountain Gun crew figures so I selected a handful of the more beaten up ones and decided to give them new uniforms. 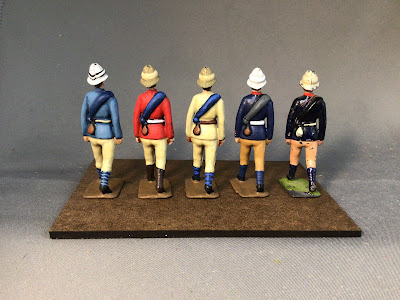 The figure on the left in each picture is a British Camel Corps uniform, the red coat is a Guards uniform, the khaki is a generic British khaki uniform, and the dark blue is a Royal Artillery uniform. The original Britain's figure is on the far right in each photo. 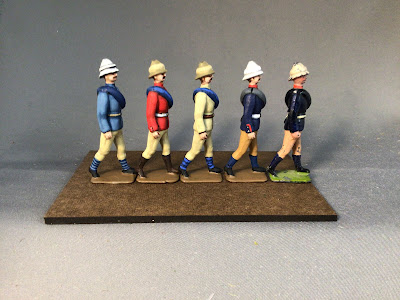 I am still trying to decide on whether to gloss coat the figures in the old Britain's style or leave them with a matte finish. I really like the matte finish, but using gloss on a Britain's figure makes sense and could be quite compelling. I might paint one more figure and give it a gloss coating to see what it looks like.

I have another 16 plastic Sudanese soldiers to paint this week and this will build the regiment up to three companies of 16 figures for a total of 48 figures. These will likely be finished within the next two days.

I might experiment with painting the flat car for the Sudan Rail Road project and the sleepers (ties) could use a coat of paint over the plastic pieces.

I need more Beja warriors and I have enough figures to paint another unit of 50 figures. I need to clip off the swords and replace them with pin swords before I paint them, so this takes an extra bit of time in order to het them going.

I have 20 Ansar Riflemen ready to paint.

Also another dozen mounted Camel Corps figures. That reminds me, I need to buy more of the Armies In Plastic Camel Corps set that includes 2 pack camels and 2 troopers. The pack camels will come in handy for the scenario from the movie Khartoum where Gordon ventures out of the city to forage for food and other edible supplies.

54mm Republican Romans and Carthaginians are also in the painting queue.

Somewhere along the line I will probably take a break from painting 54mm figures and paint some more Minden Austrians and Prussians.