I thought that the best looking 28mm ACW game was a refight of the attack on the Dunker Church during the battle of Antietam. Coincidentally, the next table had a giant terrain creation of the attack on Burnside's Bridge, from the same battle. Now I am extremely biased on my bestowing the honor of Best ACW Battle at Historicon to Dunker Church. Why? Because the game master was my nephew Alex. I introduced Alex to war gaming when he was a young teen and he has become an accomplished war gamer over the years. However, this was the first time that he had hosted a game at Historicon and I think that he performed quite well with his terrain, painting of figures (Perry Miniatures), rules and scenario.

One has to depict various corn fields in any recreation of the battle of Antietam and I think that Alex came up with a nice way of making cornfields. He used pipe cleaners, drilled into MDF bases and added a bit of ground terrain on each base. Putting all of the corn stands on the table leads to a convincing look in my mind.

We were short one player in the first game so I stepped in and commanded a battery of Confederate artillery near the Dunker Church. I deployed one section of two Napoleons on the high ground in front of the church and my second section was initially deployed on the high ground at the back edge of Miller Cornfield, facing towards the Dunker Church so that it could provide enfilading fire at any Union troops advancing towards the church. Out of nowhere, one of the other Confederate players grabbed my guns in the cornfield and trotted them down the road towards Hooker's attack. Huh??? I remedied that on the second game turn and turned the guns back around and headed for the church. There was considerable back and forth fighting near the Dunker Church, but in the end, the Confederates prevailed in this sector due to my exceptional skills as an artillery commander. That's my story and I'm sticking with it.

In game two we had enough players so I hung around the table and helped people with any rules questions. Why? You might ask. Because Alex was using an ACW variant of my one-page Der Alte Fritz SYW rules! I have to say that the rules mechanics worked very well with Civil War era troops. Well, I would say that wouldn't I? 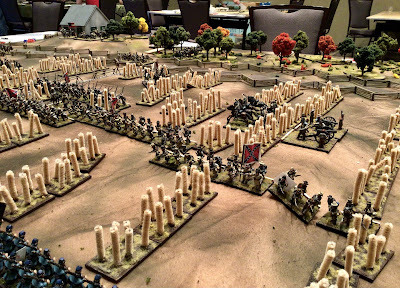 I thought that both games were successful as the games had a nice pace to the action and the players were having fun. That's what convention war games are all about.

Oh, and there was that other game going on at the table next to Alex's game. Burnside Bridge with some very nifty terrain. They were using the Brother Versus Brother ACW rules by Ivor Janci.

Finally, I have to say that the Perry ACW figures are really, really nice. Alex did a fine job of painting them (he is a Golden Demon award winner for his figure painting) and I suddenly had that little voice in my year saying "ACW, you must do ACW".