The Sands (Mats) of the Sudan

Last week the Desert Cigar Box Battle Mats arrived, but I had not opened the package until yesterday. So I unpacked the two mats and laid them out on my game table to see how they looked.

As you can see, I really like these game mats. They are sized at 6ft by 5ft which allows me to cover a 6ft by 10ft game table. My table is approximately 6ft by 14ft so I plan on buying a third mat to cover the extended table top.

The coloring is infinitely better than anything else that I could make with either felt or canvass. The contrast between the basic color and the darker speckles throughout the mat bring the whole thing to life. There are also some bits of dark greenery that could represent scrub bushes.

Here are a couple of pictures of the mat on my game table. The figures are mostly 54mm plastic figures from Armies In Plastic. I’ve added 24 Britains Highlanders to the right flank of the Imperial battle line. The zariba is made from either dry moss glued to a painted craft stick or some simple clumps of brown lichen. Lichen is always handy in a pinch. 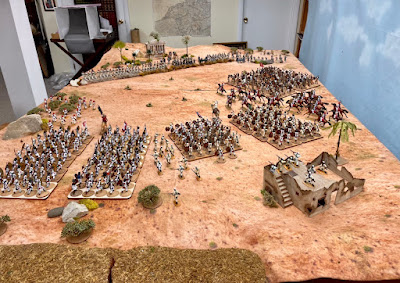 As with all game mats  one can place elevations under the mat or on top of the mat. In this particular set up I have placed my hills under the mat, but eventually I plan to have above ground hills that I will lay on top of the mat. Since I will use this largely for 54mm toy soldier figures, such hills will have to be higher than normal, perhaps at 8-12 inches in overall height. Pink foam board is available in two inch thick boards. Home Depot sells 24 inch square pieces which are perfect for hobby projects. I could buy a 4x8x2 sheet and cut it up, but the precut pieces will do just fine.

There will surely be a giant Sudan game played in the near future. Bill P and I can field a force of nearly 900 Dervish / Beja versus around 300 British, Egyptians and India troops. The set up on this table has approximately 100 Imperial soldiers and 320 Dervish. I think that a 3:1 ratio of natives to Europeans sounds about right.

With respect to rules, Bill has created a 19th Century Colonial version of his big battalion rules and we have been playing these over multiple years. All of our group of regular gamers are well versed in the rules so our games play quite easy. I’m also interested in trying out my copy of Sands of the Sudan, which are a new version of the rules that Peter Gilder used at the War Game Holiday Centre back in the 1970s.

Who know, I might even take this grand show to Historicon next year, I’m thinking two parallel 20ft by 6ft table, the Nile River with steamboats, and my whole town of Khartoum.

It’s time to move on from old news, get back on the horse again, and start thinking about hosting convention games again.