Getting Ready For Historicon - 2 Days To Go

I will be headed off to Historicon on Monday as I commence the two day drive from the Chicago area to Lancaster, Pennsylvania. There I will meet my nephew Alex and we will visit Gettysburg the day before the convention begins. Historicon starts this coming Thursday July 21st and runs through Sunday July 24th. If you happen to be there then look me up while I'm running my games on Friday evening and Saturday afternoon.

I will be running my "Bread and Croats" skirmish game set during the Seven Years War. The Austrians and their Croat light infantry will be conducting a raid on a Prussian field bakery, which is defended by all sorts of second rate battalions such as Freikorps, Garrison, Militia and Jagers.

My games are as follows:

I will be using my SYW variant of the "Woodland Wars" skirmish rules by Tom Kelly. The game accommodates 5 players per side. If the game is listed as sold out, then stop by my table anyway because sometimes a player or two doesn't show up and so a space opens up.

Alex will be hosting two ACW games on Thursday at 5PM (T17:271) and Friday at Noon (F12:147) called "Dunkers' Church". He will be using a variant of my one-page Der Alte Fritz rules with charts and troop types adjusted for the ACW era. I will probably be there table side to observe and if requested, offer any rules interpretation that might come up during the game.

Working on Game Terrain for Historicon

While the game will be the same as the ones that I ran at this year's SYW Association and Little Wars conventions, I have made a few modifications to the scenario which should make it much better. I have also added some new terrain bits to the game.

First and foremost, I decided to add some hills as corner pieces on the edges of the table. The hill terrain pieces are "L-Shaped" so that they fit in the table corners and add a nice finishing touch to the table. They also act as a sort of photo backdrop that screens out the background.

Here are some pictures of the corner hill models that I made for this game: 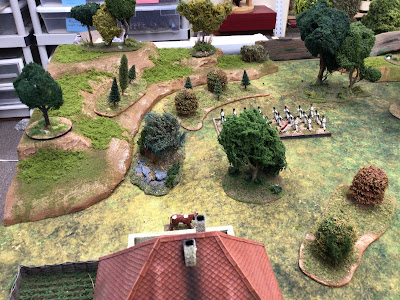 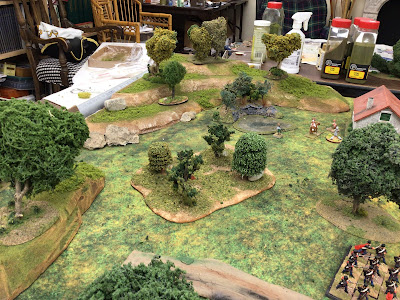 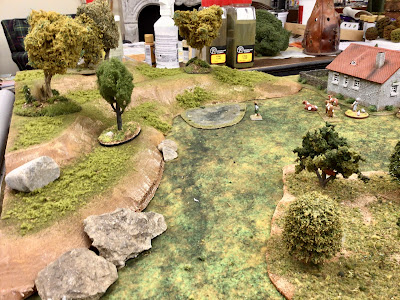 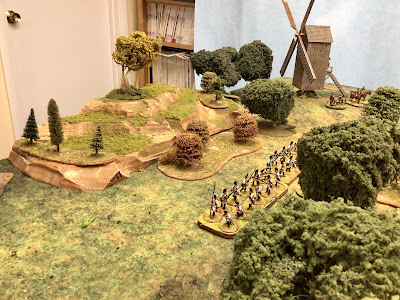 I’m having a power outage so I will go ahead and post this. More later.