I finished and based eight Prussian Red Hussars last week. This is but a fraction of the number of figures that the regiment will have in my wargaming army, but I wanted to see how the figures would look. The regiment will eventually have 24 horsemen organized into two "squadrons" of 12 figures.

My inspiration for painting the Red Hussars comes from John Ray's blog. As many of you know, John sculpts his own exquisite SYW figures and Dave Jarvis brings them to life with his well honed painting skills. I liked John's Red Hussars so much that I just had to add them to my Prussian army.

You can find the history of the regiment by clicking on the link to Kronoskaf;

The regiment's inhaber was Alexander Gottlieb von Seydlitz from 1747 through 1759. Thereafter, a gentleman named von Gersdorff assumed command of the regiment. The regiment was numbered 8th in the Prussian cavalry establishment so it was also known as HR8 (hussar regiment 8). They had the misfortune of being captured at Maxen in 1759 and thus assumed the bad distinction of being "one of those Maxen regiments" that King Frederick did not like. The regiment was not re-raised, but if I recall correctly, HR9 moved up to the HR8 designation. 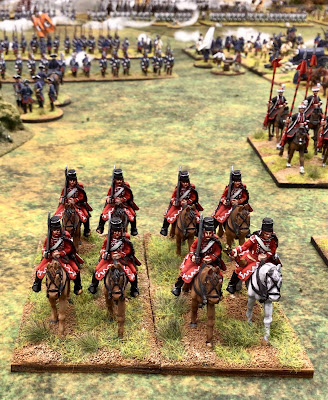 One notable distinction of my painted regiment is that the hussars in an at rest pose with their swords resting on their shoulder. One could mount them on walking horses or depict them as being in a regiment that is held back as a reserve cavalry unit. While I like the energetic charging pose that Richard Ansell first sculpted, I had him make some Prussian hussars wearing mirlitons and busbies in the shouldered sword pose. This pose is my favorite cavalry pose.

Here is a link to the Fife and Drum Miniatures web store. The link takes you directly to the Minden Miniatures Prussian section of the web store:

Here are the product codes for the new hussars at rest and the Bosniaken cavalry:

On a side note, I want to thank everyone who participated in the Fife and Drum Miniatures July Fourth sale. Your business is much appreciated and the funds generated from the sale will be used to add new Minden sculpts to the product range. Russian Cuirassiers will be the next new figures.

Another side note, I will be attending Historicon in Lancaster, Pennsylvania this year. I will be running my "Bread and Croats" SYW skirmish game on Friday and Saturday. If you are at Historicon, drop on by and say hello. Better yet, sign up for one of the games.

Final note: the US Postal Service is resuming shipments to Australia and New Zealand so our customers down under can now order figures and expect to receive them in a timely manner. The several orders on hold are also on their way to Oz.