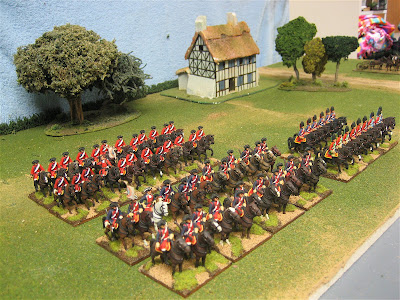 Austrian dragoon regiments Kolowrat (blue), Savoyen (red) and a converged regiment of horse grenadiers. Figures are all RSM figures, formerly from my own collection, originally painted by Bill Biles. I added four more dragoons to the two dragoon regiments to increase the regiment to 24 figures. Click the picture to enlarge the view.

I recently finished rebasing two regiments of RSM Austrian Dragoons for one of my clients and so these units will be passing on to a new inhaber. Hopefully they will serve their new colonel as well as they did for me. The blue coated dragoons are the Kolowrat Dragoons and the red coated dragoons are the Savoyen Dragoons. The third unit is a converged group of horse grenadiers from five different regiments.

The client asked me to increase the size of the dragoon regiments from 20 figures to 24 figures (see if you can spot the newly painted additions in each regiment) and to rebase the figures from two per stand to a more tightly packed in three per stand. Finally, I rebased and reterrained everything using fine railroad ballast and static grass. The end result is quite pleasing to the eye, if I do say so myself.

I noticed that we are closing in on 250,000 visitors to this blog. So we ought to hit this milestone within a couple of days, even fewer if I post more pictures of Richard Ansell's exquisite AWI greens. The traffic has more than doubled on the days that I post pictures of the new figures, which is quite a testament to the work that Richard did on these figures.

We will be fighting our annual Light Troop SYW Game next weekend in DeKalb at Schloss Frye. Every year, we have a game in December that is comprised of only light infantry and light cavalry so as to get more of a skirmish level game with lots of room for maneuvering. I will have to take some pictures of Lady de Winter's band of Regulators, Garde du Corps and Bosniak lancers, all comprising her notorious Black Legion of Doom -- and post them on this blog before the game on Saturday December 4, 2010.

I also have a few more Ansell sculpts to show this week. So stay tuned for more eye candy.
Posted by Der Alte Fritz at 11:49 PM