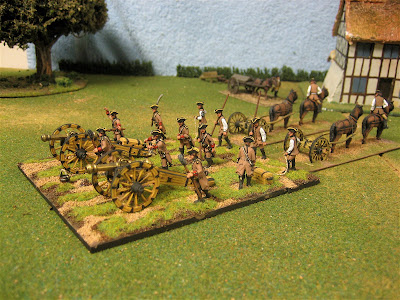 Minden Miniatures SYW Austrian artillery crew with artillery fusiliers in waistcoats helping . RSM95 limbers and teams in the background (borrowed from my other armies). Building by Ian Weekley and large tree by HG Walls (Herb Gundt). Click pix to enlarge the view.

I changed my plans a bit and veered off into the realm of Austrian artillery, rather than completing the Minden Austrian grenadiers, as planned. I think that viewing the picture of the Prussian artillery battery compelled me to get to work on the Austrian counterpart - and soon! 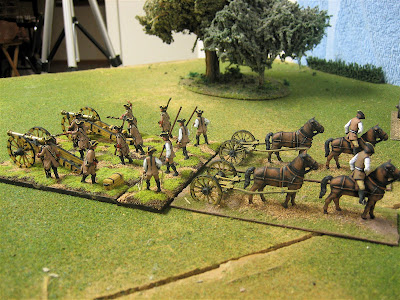 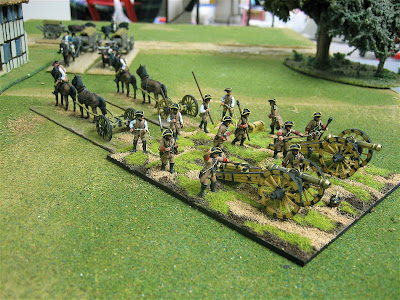 A close up view of the Berliner Zinnfiguren Austrian 12-pounders. They are a perfect fit for the Minden artillery crew. The artillery fusiliers on the stand behind the guns are the Minden Pioneers painted as Austrians in waistcoats.

So far, I have completed two Berliner Zinnfiguren 12-pounder and one 6-pounder; two sets of four artillery crew for the 12-pounders (I still have to paint the crew for the smaller gun) and three sets of two pioneers to provide the "muscle" for moving the guns back into position. The artillery crew are Minden Austrians, of course, and the dragrope men are the Minden generic pioneers, holding bar levers or skeins of rope made from twisted florists' wire.

The limbers (Berliner Zinnfiguren) and team (horses and rider from RSM95) are still a work in process with the harness traces (florists' wire) superglued onto the limber - that is the hardest part of the project - and primed and ready for paint. I use a 4-horse team of RSM95 horses and their limber rider paired with the BZ artillery pieces. Hopefully, I will have a three section battery completed by this evening (2 x 12-pounders and 1 x 6-pounder) and then I will add another 6-pounder over the next week or so.

Here is a link to the Berliner Zinnfiguren store site with information on their gun models. If the link doesn't work correctly, go to the store site (link on the left side of this page) and click on Flats link, then Miliary History, then Austria 1756-63, then Austrian artillery. I scrolled down to Austrian artillery and clicked that. It took me to the page below, showing lots of flat figures, but at the bottom of the page, are pictures of the 3-D gun models that I have been using. The cost about Euro 21.75, which is not cheap, but I think that they are worth it (you get the gun and the limber for the price). I then use RSM horses since BZ doesn't make 3D horse figures.

Eventually, I will add a Front Rank supply wagon for each gun model. The Prussian guns get a wagon with a wood cover while the Austrian guns get a wagon with a wicker cover (Front Rank provides both options with their wagons). However, I can always use some existing supply wagons to tide me over until I can get the new official wagons painted. I thought it more important to get the guns, crew and limbers done first.

The Chicago Bears whipped the Minnesota Vikings and Brett Favre 27-13. The Grimsby Wargamer and I will be celebrating the victory tonight.
Posted by Der Alte Fritz at 11:18 AM