The "Minden" Austrian Army, So Far... 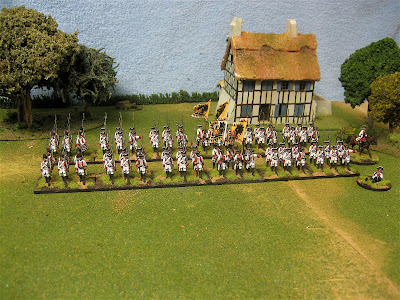 
It occured to me that I had not previously posted pictures of the Austrian infantry that I had painted for my Minden Project. Today's pictures will remedy that short sight. In my army organization, the Austrians will have a two-battalion regiment with a stand of grenadiers detached from each battalion. Two regiments will comprise a brigade and have a separate brigadier general command stand, a brigade ammo wagon, two 3-pdr battalion guns and two regimental command figures. The grenadier stands from each battalion will be converged into one battalion of 24 figures, so each regiment donates two stands of grenadiers to the converged grenadier battalion. 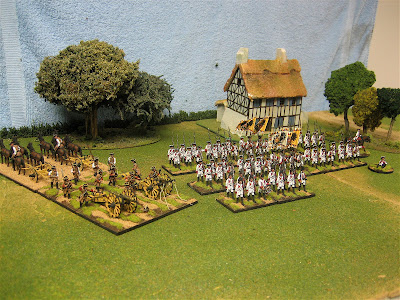 Austrian artillery battery (12-pdr on the left and 6-pdr on the right). Note drag ropes attached to the 6-pdr. Guns & limbers from Berliner Zinnfiguren and limber horses and rider from RSM.


The picture above depicts two sections of a four section Austrian artillery battery. Each section will have the artillery piece (from Berliner Zinnfiguren), four Minden artillery crew, two artillery fusiliers converted with paint from the Minden pioneer figures, one supply wagon per section, one limber (4 horses and 1 rider - from RSM). Later, I might add extra artillery figures in marching poses so that when I limber a gun, I can remove the artillerist that are glued onto the artillery stand and just attach the gun model to the limber. Then, while the limber is moving, I can set down a stand of 4 gunners walking behind the limbered cannon model. 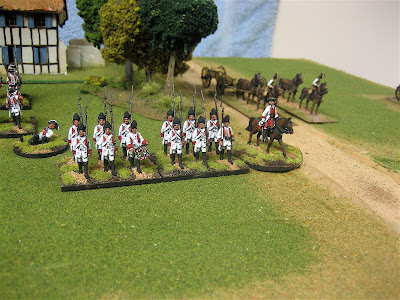 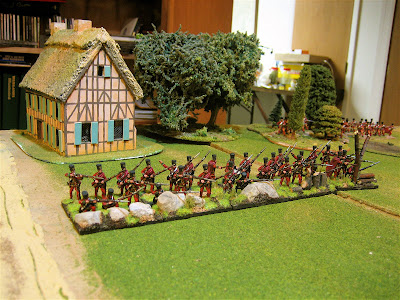 What is an Austrian army without its Croat light infantry?


Eventually, I will have two brigades of Austrian infantry with each brigade comprised of two regiments, each regiment comprised of two battalions. The converged grenadiers might be brigaded with the Croat light infantry and the artillery battery.