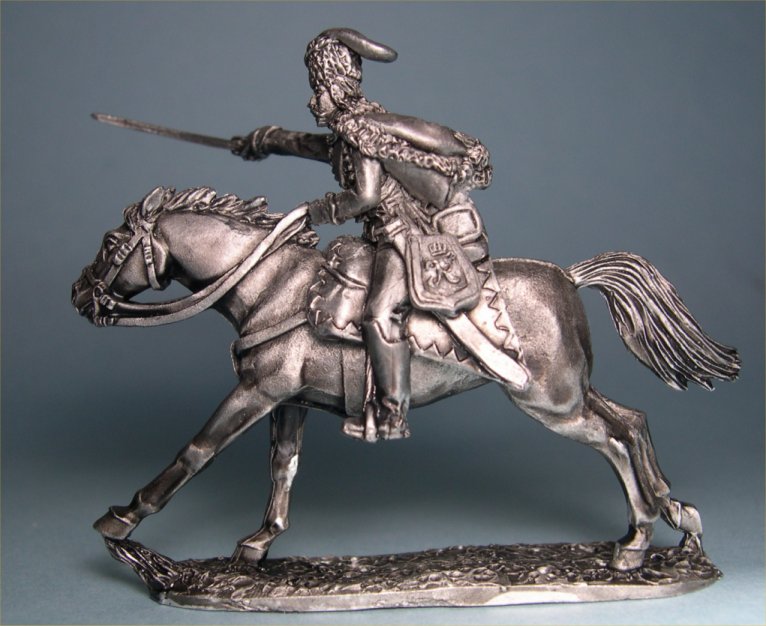 Prussian hussar trooper in busby - the latest release of figures from Minden Miniatures. Figures sculpted by Richard Ansell (bless him) and photo by Frank Hammond (bless him too).

It always makes my day when I happen to click on the Elector vs Empire blog and peruse the list of blogs, seeing that there is something new on Frank Hammond's Minden Miniatures blog. And so to my great surprise, I visited the blog and discovered Frank's announcement that he was adding Prussian hussars wearing busbies to his wonderful range of SYW figures.

Please click on the link below to see more pictures and read about the new hussar releases from Minden:

http://mindenminis.blogspot.com/2010/11/hussars-in-busbys.html
Frank reports that he also has dismounted hussars in mirlitons and busbies for the Prussians that are getting ready for mould-making so that he can put them into production. My recollection is that the range will include horse holders, horses with saddles and horse furnitures (but no riders) and various skirmishing hussars. I am already mentally creating scenarios for these figures and I have no doubt that they will be real beauties.

Now, the only question that remains for me is "how many hussars should I buy?" Should I go with 30, 32 or 40 man regiments? And should I paint them as the Green Hussars (HR1) or the Ziethen Hussars (HR2 - blue). So many choices to make, but it is a nice problem to have.
Posted by Der Alte Fritz at 10:48 PM