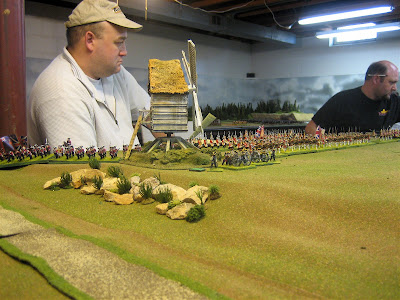 This past Saturday October 30, 2010, we convened in Brown Deer at Chez Protz to refight the Battle of Korbach, which took place in July 1760, if I recall correctly. Actually, the terrain was "sort of Korbach" with the main feature being the Tower Hill on the British left flank. As Phil Olley says, every horse and musket game should have a windmill in it, so I brought along my Ian Weekley-made windmill to anchor the British right flank. 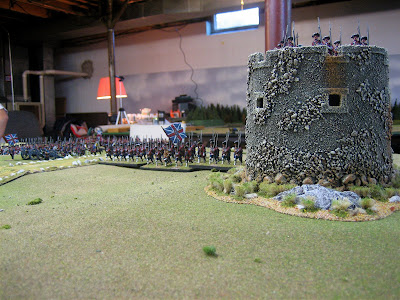 The Tower Hill was defended by some Stadden's kitted out as the 8th Regiment of Foot. Building by Herb Gundt - actually made for Afghanistan, but it looked suitable for central Germany as well, circa 1760.


As commander of the British army and owner of a perfect record in battle, i.e. I've never won a BAR game playing the redcoats, I elected to take advantage of the terrain and split our infantry with four battalions on the left (3rd Foot, 8th Foot, 11th Foot, and 42nd Highlanders) supported by a battery of two six pounders plus one 4 lb battalion gun. Matt Shaw, a first-time BAR player, handled his brigade very well, placing a grand division of the 8th in the Tower, while deploying the rest of the brigade behind the crest of the ridge.

On the far right, John Beck anchored his brigade around the Windmill, with three battalions to the front and a battalion of converged grenadiers in support, forming the second line. For most of the game, it appeared that John was going to stop the French attack cold, but then a bad run of initiative cards (and both of the jokers in the deck) went to the French just in time to give them nearly all of the first fires in the critical final three turns of the game.

I commanded the reserve of the 1st Guards, a converged grenadier battalion and two small squadrons of Life Guards/Horse Grenadiers -- deployed in the center to plug any holes that might develop. 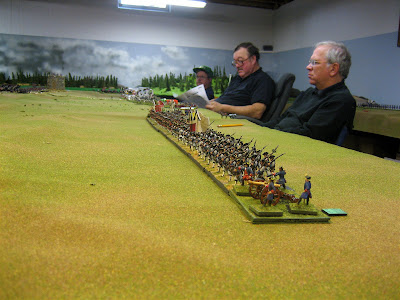 French right flank, commanded by Brent Olsen (not shown in this picture) - two battalions of Capitulations figures and RSM gun crew, backed up by a battalion of Suren Gardes Francaises. Monsieur Protz looks on with approval. 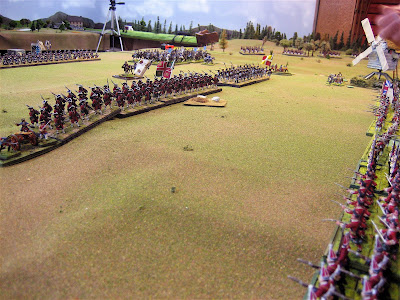 French regiments Bulkelley (red) and d'Eu (white) advance on the British right with Gardes Francaises barely visible in the background. 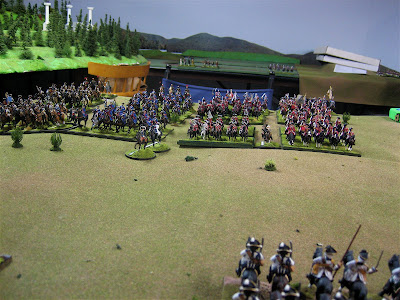 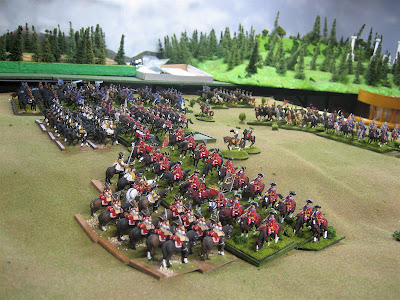 Hanoverian horse regiments, in white coats, tussle with the red-coated French Gensdarmes -- sort of a reversal of uniform coats in this picture

I'm afraid that I will have to stop for this evening and head off to bed. I shall continue the story tomorrow.

Oh yes, the French defeated the British once again.