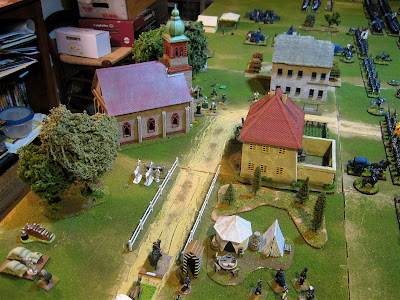 The new church fits in quite nicely with the rest of my town. All the buildings, tents, fences and large trees were made by Herb Gundt.


Saturday evening I made a trip to the Games Plus hobby store to meet up with Mr. H.G. Walls, himself, to pick up a couple of models that I had recently commissioned with him. As usual, the models were stunningly good, for Herb has the knack or intuition for knowing exactly what it is that I want whenever he makes a model for me.


The first item is a small German onion dome church to use with my Minden Miniature wargame project. I have decided that built up areas will occuppy an area that is two feet square, i.e., anything that sets foot in the square module is considered to be in a built up area ("BUA"). That eliminates the argument over whether or not a battalion is in or outside of the village. If you are in the square, you are also in the BUA. As a part of this system, I want each BUA to look like a diorama, so I want my buildings to be a little bit smaller than usual because I want to cram 3 or 4 buildings into each square, plus a number of large trees. No more of these tiny little tree models for me. I want my Great Oak to look the part. You can see what I'm talking about in an arborial sort of way by looking at the picture below. 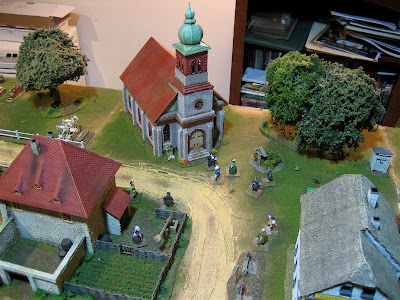 Once of the things that I noticed in some of the flats dioramas at museums in Germany, is that they clump a bunch of buildings together (3 to 5) and add some very large trees, to create a sense of realism. This is what I am trying to duplicate with this set up.

Next on my list of Gundt Goodies were some border guard posts that I asked Herb to make for me. He made two single guard boxes (you can see an example in the first picture at the top of the page, look for the house with the black and white chevrons, next to the command tents. Herb also made a border crossing post with a guard house and gate that actually raises and lowers. The only thing missing was a sign that said "Austrians Keep Out!"/ 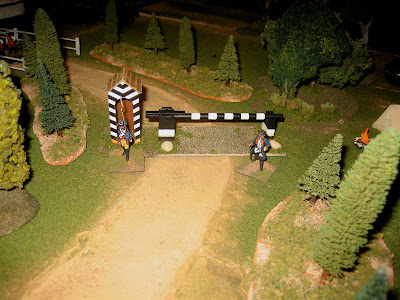 I forgot to turn off the flash, but the effect was rather interesting. It looks like the picture was taken at dusk. Minden Prussian sentry, RSM officer, and fire from Miniature Building Authority. Smaller trees by K&M. Click the picture to enlarge the view.

And finally, as long as I was at Games Plus, I had to do a little bit of shopping, so I picked up some paints and metal and wood bases. I was about to walk out the door, when I spied a large bucket full of "casino dice". These are large dice with square corners, rather than the standard rounded corners that most game dice have. I seem to recall a discusion on Old School Wargaming about the benefits of square cornered dice. So I bought ten of these beauties and plan to use them at my next wargame, next weekend. 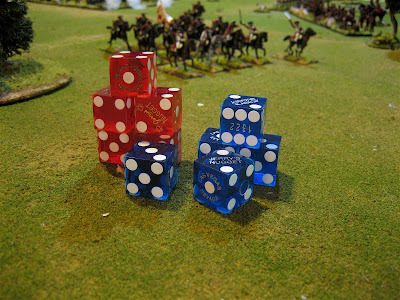 Casino dice - guaranteed to roll lots of box cars (I hope). They are also huge and I like them a lot.


I am currently painting feverishly in order to finish some British cavalry in time for our game next weekend. As usual, the game will be held at Chez Protz on saturday October 30th. This time the game will feature the British against the French. I added a squadron of the 1st Horse (later 1st Dragoon Guards) to bring this unit up to 36 figures. Now I'm working on a squadron of Life Guards, using Stadden figures. The first test figure turned out nicely, so I'm looking forward to completing the unit and adding it to the dozen horse grenadiers that I already had painted. I also cleaned and prepped some more cavalry, but I ran out of metal bases, so I can't blitz paint some thing like The Blues at the last minute. More to follow this week.
Posted by Der Alte Fritz at 11:56 PM