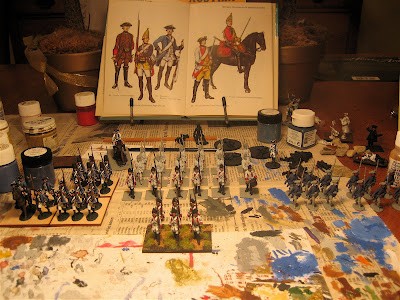 Minden SYW Austrian grenadiers stand front and center on Fritz's painting table, flanked by some RSM Bavarians (since completed) and a few other bits and pieces. My trusty old copy of Mollo's book on SYW uniforms can be seen in the background.


I have a battalion of Minden Austrian grenadiers that have been sitting on my painting table for over a month now, just crying to be completed. As you can see in the picture, above, I was able to finish one stand of six grenadiers before getting side tracked by my Summer Sale and various other priorities.

I have been helping other duchies and principalities build out their armed forces over the past month or so and it has been fun to crank out a few units for other wargamers and even more fun when I get to see the figures that I painted showing up on their blogs. Kind of cool, isn't it?

So just when I had all of the recent painting commissions completed and shipped, I was thinking about getting back to my Austrian grenadiers. But then Fate intervened with a ton of things to do at work, which drained me so much at the end of the day that my painting slowed down to a mere trickle. (On the other hand, some times of late the work has been so heavy that only the thought of going home and sitting down at the painting table is the only thing that helps me get through the work day). 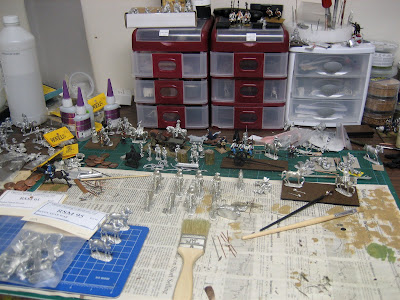 My basement work station - this is where I clean and prime my figures and do all of my terraining of bases. The other station (first picture) where I paint is upstairs in the dining room. Here you can see some RSM Prussian Dragoons that eventually went to a client in the Cincinnati area.


Then those perfidious Gallians decided to stage another invasion of Northern Germany - won't they ever learn? So I am currently rushing reinforcements to the Marquis of Granby, commanding officer of His Britannic Majesty's Army in Western Germany, headquartered at Minden.

The 1st Dragoon Guards needed an extra squadron of Suren figures, so those got moved up in the painting que. I completed the first six figures the other evening and was working on some officers and mounted drummers to complete the squadron - there will be three squadrons of 12 figures in this regiment, all Suren figures.

After that, I have two more squadrons of the 3rd Dragoon Guards primed and ready to paint. In fact, I have already started on the first squadron, using the RSM British cavalry at the charge pose, and what a grand looking figure it is. The unit will have 24 figures and sport flags supplied by Rick O'Brien, a.k.a. "The Flag Dude". I'm looking forward to seeing these new colors as Rick turns out a great looking product. That should give me some incentive to finish up the 3rd Dragoon Guards by the end of the month, October 30th, when we convene in Brown Deer, Wisconsin to repel the Gallians from Minden, once again.

Then come November, I hope to be able to release some news about a top secret project that I am working on. I think that most of my blog followers will be as excited about the project as I am, once the news is released. So stay tuned for more information.
Posted by Der Alte Fritz at 12:12 AM