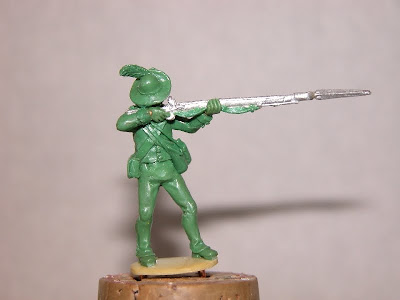 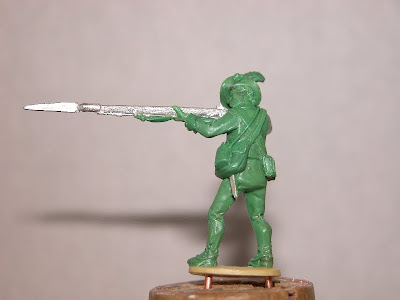 
Here is another one of the British light company figures that Richard Ansell sculpting for our new AWI range of figures. This is one of my favorite figures because the figure seems so natural in his pose and it is visually very elegant.


Several people on TMP asked for some comparative photos of our figures and some samples from the Perry, Eureka and Front Rank ranges, all of which are very nice figures, with each having its own unique style. In the first set of pictures below, I have placed a Eureka Ragged Continental, a Perry AWI Hessian Officer, and a Minden SYW Prussian Officer (a proxy for the Ansell-sculpted AWI figures) on the review stand together. The Perry figure is 1-2 millimeters taller than the Eureka and Minden figures, but the difference does not seem to be significant. In the second picture, I added a shim (using a US Penny) to the Minden figure to bring it up to the same height as the slightly taller Perry figure. This is a little trick that I use in my 1:10 ratio BAR armies for the SYW whenever I want to use figures that are a little shorter than the rest of my 30mm figures. Once you cover the shim with basing material, the difference will not be noticeable. 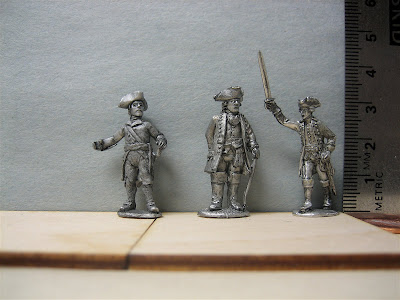 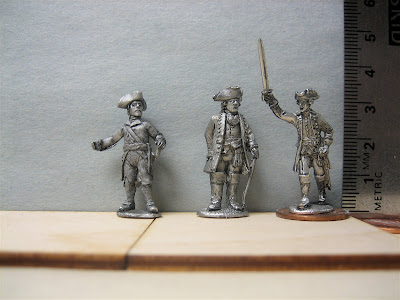 Same figures as previous picture, but with a shim (US Penny) added to the Minden figure to add another millimeter to its height in comparison with the other two figures.

I think that the pictures above indicate that the three ranges, Eureka, Perry and Ansell can all be used together on the same table top, with little discernable difference, as long as you don't mix ranges into the same unit. 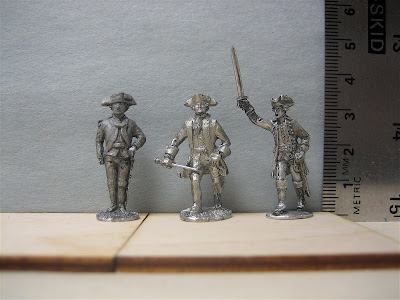 Hinchcliffe X-Range (left), RSM (centre) and Minden (right) figures are very compatible in terms of height and the heft or build of the torsos. Both the Hinchcliffe and the RSM figures were sculpted by the late Steve Hezzlewood back in the 1980s. 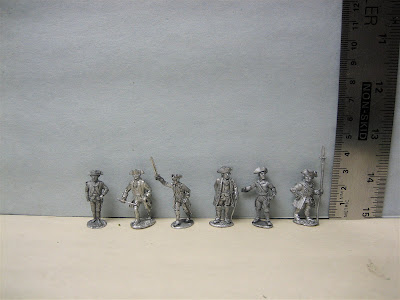 The final line up of figures showing all six AWI ranges (from left to right): Hinchliffe, RSM, Minden, Perry, Eureka and Front Rank. You will need to click this picture for a closer view.

I think that the final picture, above, illustrates that one can use a variety of figures in the same army. In some cases, you might be able to mix in a figure or two from one range into the other without a discernable difference. Any more than that, it starts to become noticeable, in my humble opinion. I am not averse to using different ranges of figures in my BAR SYW armies, it is just that I do not mix brands into discrete units unless I need a specific figure that nobody else produces.

*****
I will post some more pictures Sunday night or on Monday so that you can see the rest of the British Light Infantry poses that are completed.