On The Work Bench 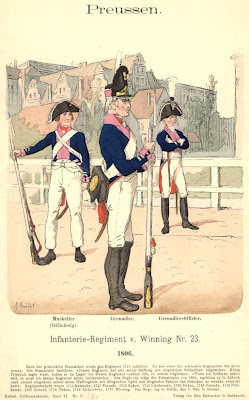 1806 Project Update
I have been chipping away at the 1806 Project over the past two weeks as I try to keep to my commitment to spend the month of January adding new figures for this project. I added 20 or so figures each to battalions IR24 von Zenge and IR13 von Arnim in order to bring them up to 60 figures plus 5 scheutzen. The next unit on my painting table is the grenadier battalion Osten (22/36). Half of the battalion will be painted as IR22 (von Pirch) grenadiers with red facings, while the other half will be painted as IR36 (Puttkamer) grenadiers with white facings. The grenadiers wear a leather cap & mitre with the hat band in the regimental facing color, unless the facing color is white - and then the band color is blue.

By the end of this month then, I should have four battalions of Prussians ready for service. This should provide me with enough of a core of troops to start play-testing some rules ideas for a BAR Napoleonic variant. The French have two line battalions and one legere battalion that are ready to go. So the forces should be adequate for the play-testing.

Speaking of the French, I was going through boxes of figures that I have packed away in my famous (at least it is famous to me) Closet O' Lead and I came upon a box of Elite Miniatures Chasseurs a Cheval. I intend to paint these as the 1er Chasseurs a Cheval that served in Davout's III Corps as part of his light cavalry brigade. These are very nice figures and I'm looking forward to painting a few samples very soon.

Yesterday I received a large packet of GMB Designs flags from Miniature Service Center in California. MSC will no longer carry the range so I was stocking up on flags in order to fulfill my future needs and, ahem, help Doug Carroccio clear out a little bit of his inventory. So I have most of the flags that I will need for the Prussian part of my 1806 Project.

SYW Austrians
Progress is being made on my SYW Austrian army as well, although I haven't painted a single Austrian figure in several months now. Dennis Smail has been working on some Austrians for me since September of last year. He finished the 60 figure grenadier battalion shown in a previous post and recently sent me reinforcements in the form of 60 figure battalions of the Josef Esterhazy Hungarian regiment and the Gaisruck German regiment. I haven't based these figures yet, so I had better get going on this before I accumulate too many unbased figures. I hate it when a big game is coming up and I find myself basing and terraining several hundred figures during the week prior to the game. Not good.

What is good is how nice these Crusader Austrians are that Dennis has been working on. I am really impressed with the quality of the work (both the figure and the painting of the same) and look forward to putting these battalions on the gaming table. Yesterday I received a sample of one of the Crusader Croats, attired in a blue coat and all I can say is "Wow!" All of these reinforcements have me wishing that I could get back to painting SYW figures. I'm going to need around 200 Austrian cavalry for my BAR game at Historicon in July 2008 and time is a wasting.


SYW Prussians
There is not much to report on for the Prussian army. This army is largely completed and I really do not need to add a single Prussian for the rest of the year. Well, we all know that that is unlikely to happen. Here is what is in the que for the Prussian for 2008: a 12-figure squadron of the CR13 Garde du Corps cuirassiers, another 12-figure squadron of HR5 Black Hussars, a 60-figure IR18 Prinz von Preussen regiment using my Potsdam Miniatures, the Langen Kerls or Riesengarde using Stadden Prussian grenadiers, and humongous quantitites of Prussian artillery (using the Berlin Zinnfiguren models to replace some of my older, existing artillery pieces. I also need to paint a few more brigade commanders and base them on 2-inch round bases. So much to paint, so little time available to do it.
Posted by Der Alte Fritz at 11:37 AM