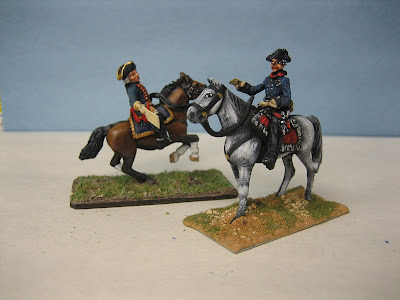 Frederick the Great (Suren 30mm) depicted receiving a message from an aide de camp (Front Rank figure). The ADC was painted by Patrick Lewis while yours truly painted Frederick.


A Little Background MaterialFrederick II, the king of Prussia, was born on January 24, 1712 to Frederick William and Princess Sophia Dorothea. The name Frederick means "rich in peace" for what it is worth and author Christopher Duffy suggests that this gives a hint of what his reign might have been like "had he been allowed more of that blessing." The story of his youth and upbringing are well known by 18th Century afficionadoes and undoubtedly shaped him into the military general who made the oblique order famous and turned mid-18th Century politics on its head.

From his mother and his elder sister, Wilhelmine, he received his interest in music and the arts. Frederick was an accomplished flutist and composer of music - his Hohenfriedberger Marsche being one of his more notable works (this is the tune that is used throughout the film Barry Lyndon whenever the Prussian army appears on the screen).

This sensitive, intelligent and slightly built young man drew the scorn and anger of his father, Frederick William, according to Duffy, and subjected him to an endless stream of indignities and humiliations in public. This led to Frederick's famous attempt to flee the country with his boyhood friend, Hans Hermann von Katte in 1730. The scheme was discovered and young Frederick was forced to witness the execution of his friend von Katte. There is speculation that Frederick William had the same fate in mind for Frederick, but that he came to his senses and consigned his son to virtual house arrest at Custrin. Gradually, Frederick came back into the good graces of his father and was allowed to set up his own home at the castle of Rheinsbug in 1736.

When Frederick William died in 1740, young Frederick's military training was complete. He was now ready to put his study of military history and training to good practice, with the sudden demise of the Emperor Charles VI of Austria. Frederick seized the opportunity to invade Silesia during the winter of 1740 and would continue fighting the Austrians through 1748, in order to consolidate his territorial gains.

His practical military education began with the battles of Mollwitz (April 10, 1741), Chotusitz (May 17, 1742), the capture of Prague in 1744, the crushing defeat of the Austrians and Saxons at Hohenfriedberg (June 4, 1745), and finally Soor (September 30, 1745. Another Prussian victory under the leadership of The Old Dessauer at Kesselsdorf (December 15, 1745) effectively ended the Austrian-Prussian conflict in the War of the Austrian Succession. One can imagine that this endless string of victories over the Austrians created a sense of hubris that would nearly bring an end to the House of Hohenzollern in the subsequent Seven Years War (1756-1763).

A Little Anecdote
Frederick was well known for his quick with and verbal repartee, a facit of him that I find interesting. So I thought that I'd provide a little anecdote that demonstrates this best:

The king had a great regard for the English ambassador, Mr. Mitchell. During the Second Silesian War, Mr. Mitchell informed him that the English had gained a very considerable advantage over the French, and made use of the expression: "by the help of God" we have entirely defeated the French."

"Certainly Sire," replied Mitchell, " and he is the only one who demands no subsidies of us."

"And he often serves you accordingly," returned the king.
Another little story nicely conveys the sense of humanity and gentlemanly conduct that seems to be the trade mark of the 18th Century:

In the year 1757, a party of Prussian hussars took the courier prisoner, who was entrusted with the Imperial diploma, by which general Loudon was created field marshal. The king immediately sent it to him by a trumpeter, and congratulated him politely upon his promotion.

And this one conveys a bit of Frederick's sense of humor:


The king of Prussia had very strict rules that no officer should wear any dress but his uniform. Notwithstanding this, a young officer dressed himself in a plain coat, and walked with a lady in the royal gardens of Sans Souci, as he supposed that the king was gone to Potsdam. But suddenly, as he turned at the end of a vista, he met the king, who immediately asked, "who are you, sir?" The officer, not having even taken the precaution to change his sword, found himself at once betrayed, but still had the presence of mind enough to say, "I am an officer, but am here incognito. [the 18th Century version of "splunge" one would suppose] ." The king was pleased with the answer, and said, "then take care the king doesn't see you" and walked on.

Celebrations Today
I typically set out all of my Prussian army figures and hold a grand review of the troops on the King's Birthday. However, since this has been done recently, I may clear off the wargame table this evening and hold a review of just the cavalry. Should I do so, then I will take pictures of course and post them on this site.
Posted by Der Alte Fritz at 10:17 AM