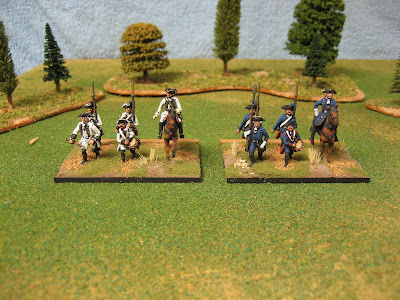 
I just had to get back to painting some SYW figures after doing a fair number of 1806 Napoleonics, or else I was going to develop a severe case of burn out. Seven Years War ("SYW") is more wargaming core and passion and I find that painting these figures helps me regain my enthusiasm for painting, while avoiding burnout.

Luckily, I had a friend who needed some command stands for the SYW era as he had a particular interest in certain Austrian and Prussian regiments. I happened to have plenty of spare RSM figures laying around (and who doesn't?) so I knew that I could whip them out over the weekend


We discussed the project briefly and it was decided to place four or five figures on a single stand (60mm by 80mm) of MDF board and create a little diorama. The choice of regiments made the project easier: the Austrian regiment Prinz zu Salm-Salm which sports black facings; and the Prussian Garnison Regiment Nr III, a garrison regiment wearing an all-blue uniform with no lapels and no fancy lace. It took me about 3 hours per command stand. Here are some close up pictures below: 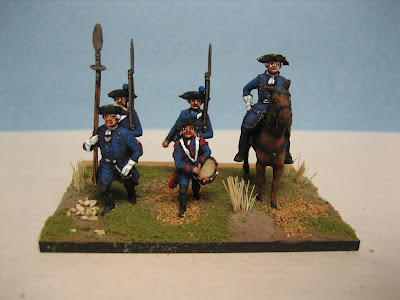 The picture above depicts the "Garnison" or Garrison (in English) regiment GRIII, which was stationed in Colberg, in Pommerania. As you can see, it is relatively easy to slosh on a lot of blue paint for the coat, breeches and waiscoat; and a little bit of black for the gaitors, hat and equipment and one white cross belt. I could paint these fellows all day!

The Colberg Garrison Regiment was created in 1718 with an initial strength of three companies. It was increased to five companies in 1721 and was charged with manning the Peenemunde battlements, the Anklam ferry and Swinemunde, thus being responsible for defending both sides of the Oder River. In 1740, it supplied a large contingent to the newly formed IR39 fusilier regiment. The battalion was enlarged to a two-battalion regiment in 1756, at which time, its inhaber was Colonel Georg Arnold von Grolman, who would command the regiment throughout the SYW. During the SYW, the regiment was part of Prince Henry's Saxon Corps, the first battalion being stationed in Torgau and the second battalion in Dresden (nice place to spend the war, don't you think?). The first battalion was captured by the Austrians at Torgau, when the occuppied the city ahead of the arrival of the King's army (which set off the subsequent battle of Torgau in 1760. The second battalion was captured at nearby Wittenburg in the same campaign. Since the Austrians were not of a mind to exchange prisoners, at this point in the SYW, GRIII sat out the remainder of the war. 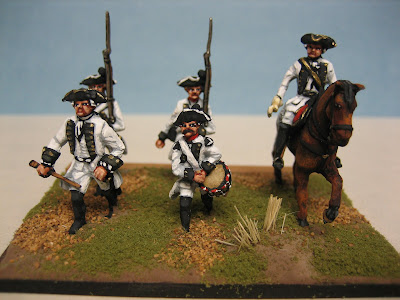 
The Austrian regiment Salm-Salm has the unique distinction in the Austrian army of having black facings (the lapels and cuffs). I don't have much information on this regiment, but they always seemed to be a part of Daun's army during the SYW. In the above picture, I used the RSM British mounted officer, which explains why his inhaber's sash is being worn over the shoulder rather than around the waist. I decided that there was no reason why he couldn't wear the sash over the shoulder. Black facing are easy to paint. For the highlight color, I mixed a little bit of flesh colored-paint into a pot of black paint and the effect seems to work rather well, although you may not be able to tell in the photograph.

I painted the Austrians (6 figures including the horse) on Saturday and finished off the Prussians on Sunday afternoon. RSM figures are a joy to paint because of their fine proportions make them look like real people. They are also stripped down on the equipment side to just the cartridge box and hanger sword, so one doesn' t have to spend a lot of extra time painting back packs and water bottles, etc. These figures fit very well with the newer Minden Miniatures designed by Richard Ansell and Frank Hammond.

To finish off the project, I glued the figures onto the wood base and then glued a piece of mahogany across the back side of the base. I will later glue a name tag onto the strip of wood, but first I want to let the spackle compound (which I use to create the ground effect) dry overnight. You may notice some tall grass stuck into the base. This is nothing more than bits of sisal cut from a scrub brush and plunged into the spackle while it is still wet. Then I sprinkle some fine gravel from Gale Force Nine and a bit of Woodland Scenics fine grass to finish off the stand. 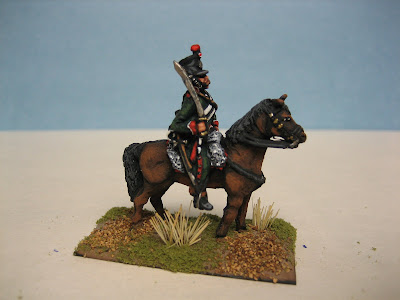 
I did one Napoleonic figure over the weekend. This is one of the old discontinued Elite Miniatures 1805-1807 French figures that I have been looking for. I have ten chasseur figures so far, thanks to Old School Wargaming friend, Steven Gill (thank you Steven). All this talk of these figure got me hankering to paint a couple of samples, so I primed the ten chasseurs and concentrated on painting one figure from start to finish. You can see the result above. The figure is wearing the Habit Longue which was "officially" worn until 1808, when the shorter tailed kinsky tunic was introduced.

The 1st Chasseurs a Cheval are known to have worn the Dolman tunic, as worn by hussars. The dolman was not manufactured for chasseur regiments during the time of the First Empire, so the regiments wearing the dolman acquired them during the days of the Republic and were "unofficially" wearing them during the 1805-1807 period. Knowing how easily uniforms wore out on campaign, I think that it is reasonable to assume that some of the dolmans, from the pre-1804 period, would have been wearing out and needing replacement by the time of the Jena-Auerstadt campaign in 1806. Thus the replacement tunic would be an Habit Longue in 1806 rather than the Dolman. It seems reasonable to assume that one could have a mix of Dolmans and Habit Longue in the same regiment. At least that is my story and I'm sticking to it.