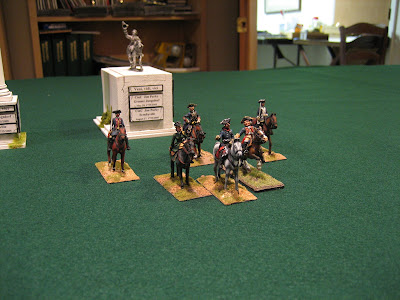 The royal party at the review stand. The Queen consort in green and Frederick are both Surens, the ADC is a Front Rank figure, and the second has two Staddens with drawn sword and one Elite Miniatures ADC on the review stand. Note the victory columns in the background with plaques denoting the names of battles won.


Today was the anniversary celebration of Frederick II of Prussia's birthday, having been born on January 24, 1712. In honor of Der Alte Fritz, I decided to conduct a grand review of all of my 30mm Prussian cavalry on the parade ground. A total of 19 squadrons (12 sqds of cuirassiers, 3 sqds of dragoons, and 4 sqds of hussars) donned their dress uniforms and paraded past the royal review stand. They approached the stand in a grand column of squadrons and then did a left face towards the King. 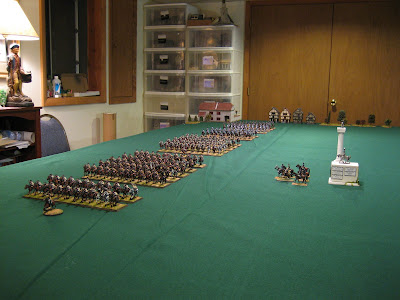 A view of all 19 squadrons as they march down the parade ground in a column of squadrons, led by the cuirassiers, then the dragoons, and finally the hussars.

The grand column was led by the two-squadron Garde du Corps (CR13) cuirassier regiment that was brigaded with the Prinz von Preussen (Gelbe Kuraisier) CR2 regiment. These are comprised of Elite Miniatures Prussian SYW cavalry figures and are nicely animated. 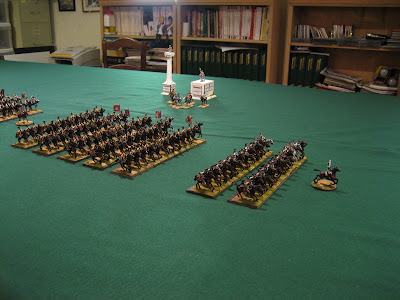 Elite Miniatures are used to form the CR13 (right) and the CR2 (left) cuirassier regiments. Each line of figures in single rank represents a squadron of 12 figures.

The next regiment in the parade column was the famous Seydlitz Cuirassiers (CR8) - Suren figures. This regiment was recently increased from 3 sqds to 5 sqds. 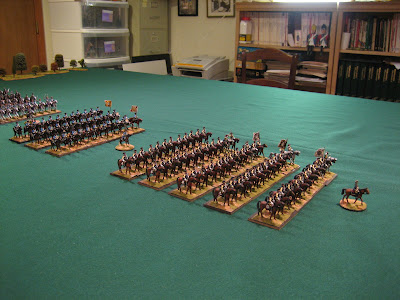 
The next group in the parade was the dragoon regiment Jung Krakow (DR2) - also Suren figures. Their famous charge at Little Wars 2007 rode down three Austrian battalions to nail down the Prussian victory. 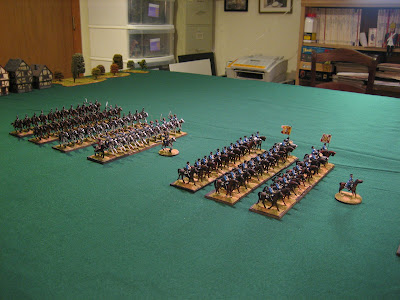 
And finally, bringing up the rear of the parade column, were those magnificent hussars. First came the Zieten Hussars (HR2) in blue pelises and fur busbies and all riding white stallions. These are Stadden 30mm figures. They were followed by the elite regiment of the von Reusch or Black Hussars (HR5), decked out in their fearsome all black uniforms and mirliton hats bearing the dreaded death's head on the front of the cap. The Black Hussars recorded their second battle honor in 2007 and thus were elevated to "elite" status. They seem to continually befuddle that eminent French cavalier, Monsieur Chevert, in many of our wargames. 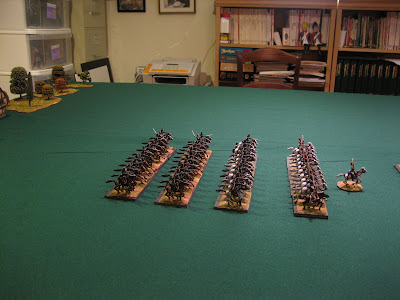 One squadron of Zieten Hussars (right) followed by 3 sqds of Black Hussars. Both are from the Stadden range.


The regiments then did a left face turn so that they were all facing the royal party, assembled near the victory columns. Each brigade commander then rode towards the review stand and saluted King Frederick II with a sword salute, and then doffing their tricorns, they bowed in front of the King. 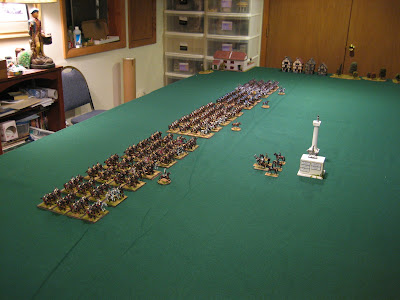 The column executes a left face and aligns itself facing the royal party at the review stand and victory columns. 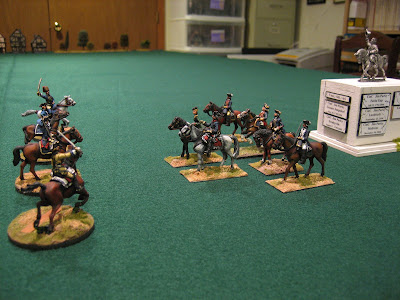 The brigade commanders ride up to the review stand and offer their compliments and good wishes to King Frederick on his birthday.

It was a glorious ceremony full of color , precision drill and festive music. While setting up the parade, I played a CD of 18th Century Prussian military marches, including the King's favorites "The Hohenfriedberger March" and "The Old Dessauer March."


It is also nice to see the full complement of cavalry on the table at one time. It enables me to pick out some small items that need changing, such as adding a few more squadron flags for particular regiments, or the need to add a couple more cuirassier commanders here and there. Also, having 19 squadrons seems a little bit odd to my ordered and symetrical 18th Century mind. Methinks an even 20 squadrons would be nicer. So I will probably add one more squadron of dragoons or hussars in the near future in order to bring everything back into balance.

And somewhere, off in the distance, there lurked a black coach and its sinister passenger, but it went unnoticed by all eyes, as far as I know. 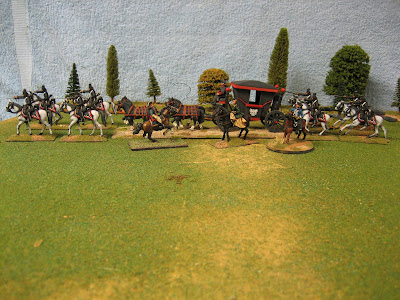 Milady de Winter's black coach and escort provided by a troop of the Black Hussars. Coach by Redoubt and assembled by Herb Gundt, driver sculpted by the talented John Ray for this project, Suren Milady de Winter (??) on horseback and various other attendants.