Some Thoughts About Croats 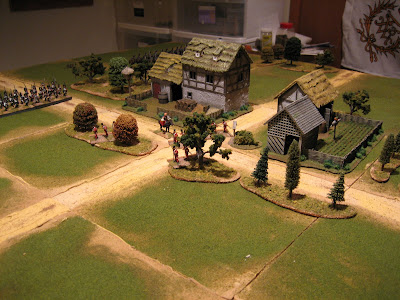 RSM Croats skirmishing out in front of the Austrian battle line, taking advantage of the cover provided by the trees and the village. Terrain boards and figures by Der Alte Fritz. Buildings by Herb Gundt.


There was some recent discussion on the Old School Wargamers Yahoo group about the use of Croats in Seven Years War battles. Did the Croats engage only in kleine krieg style actions, or were they trained to fight as formed infantry during the SYW?

The Croats were a force of light infantry recruited from the border areas of the Habsburg Empire. During the War of the Austrian Succession, they excelled in the small wars and skirmishes and neither the Prussians in the Silesian theatre of operations, nor the combined Franco-Bavarian armies operating in the Danube, had any effective means of countering the wild and aggressive Croat light infantry. As Frederick said to his generals:

"But it is a different question in the woods and mountains. In that kind of terrain the Croats throw themselves to the ground and hide behind rocks and trees. This means that you cannot see where they are firing from, and you have no means of repaying them for the casualties that they inflict on you." [Duffy, "Army of Maria Theresa", pg 82].

The Croats were transformed from roving bands of freebooters, in the manner of the infamous Baron von Trenck, into an organized establishment of regiments under the direction of Prince Joseph Saxe-Hildburghausen: two Warasdiner regiments, four of Carlstadter, and three of Slavonians. At the outbreak of the SYW, the Croats could field 34,000 infantry and 6,000 hussars. Duffy states that altogether 88,000 Croats saw service over the course of the SYW. They played major roles at Prague and Kolin, especially in the latter battle where they served as the tripwire against the Prussian attack. Over 7,000 Croats screened the Austrian columns of attack at Hochkirch in 1758, provided the blocking force at Maxen in 1758 and they were the first to storm into the fortress of Schweidnitz in 1761.

Perhaps the one major problem with respect to the Croats was the tendency of Austrian commanders to disperse them in penny packets throughout the army. This reduced their effectiveness and also made them more vulnerable to Prussian attacks, especially as the Prussian freikorps regiments began to master kleine krieg tactics. Loudon recognized this problem and proposed adding grenadier companies to the Croat regiments. Taking this idea a step further, Loudon proposed the formation of Austrian freikorps regiments to counter the Prussian ascendency in the kleine krieg, thus nearly dispensing with the Croats altogether.

"No general believed he could exist away from the main army unless he had several hundred or upwards of a thousand of the redcloaks scattered about him to see to his safety. Hence we had some of these brave men almost everywhere, but never had them in a united corps." [Cognazzo, per Christopher Duffy]


My belief is that the Croats were not used as formed infantry on the battlefield, but rather, they stuck with their natural inclination to fight from cover where they had protection from the Prussian formed infantry and cavalry units. Croat infantry can be used in two manners: first, as small parties of raiders causing havoc in the little conflicts and skirmishes that occured frequently along the supply routes and rear areas of the enemy lines; and secondly, on the perifery of the battlefield in areas where they could seek cover.

As evidence of this claim, I would point to their use at Kolin, where they were deployed in a number of small villages in front of the Austrian lines, as well as in the tall cereal grass near the Kaiser-strasse. From these vantage points, the Croats were able to pepper the Prussian march and distract them into losing sight of their battle plan and turning the attack into a frontal assault of the high ground at Kolin. At Lobositz in 1756, the Croats occupy the Lobosch Hill and provide considerable discomfort to the Prussian infantry which had the unenviable task of rooting them out of this difficult terrain. Again at Hochkirch and Maxen in 1758, the Croats operated in the covered wooded areas of the battlefield.

I would direct everyone to take a close look at Christopher Duffy's book Instrument of War (Emperor's Press, 2000), which provides an excellent study of the Austrian army organization and its tactics on the battlefield. Pages 394 to 398 provide some valuable insights into how the Croats fought during the SYW.

"The honour of the army resides in our 60,000 Croats. They never desert. They are sober, obedient, easy to lead, tireless, and as splendid-looking as they are proficient" -- Prince de Ligne,
Posted by Der Alte Fritz at 11:09 PM