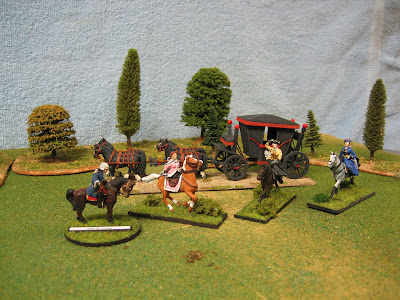 Those mischievous French ladies were the cause of the fight at the Muhlenberg. Coach by Redoubt, the lady in pink was sculpted by the talented John Ray in the UK, while the rest of the ladies are from the Suren range, and the ADC from Front Rank. All from the collection of Bill Protz and painted by himself. Coach painted and assembled by Herb Gundt for Der Alte Fritz's collection.

What started out as a little joy ride in the countryside for Ladies Cherise, Silhouette and Pettigree led to a sharp little battle to open the new year on a bitter cold day in Germany, circa 1758. Our little gaggle of ladies of the Gallian Court found themselves trapped behind the enemies lines when a Germanian reconaissance in force (3 btns musketeers, 1 btn grenadiers, 4 jager companies, 6 squadrons of hussars, 3 squadrons of dragoons, and two 6 pounders) led by Major General von Hacke, occupied the little village of Muhlenberg, situated a few miles west of the Fulda Gap. Unbeknownst to von Hacke was the fact that the delightful little party of ladies staying at the local gasthaus, were in fact the notorious Gallian spy, Lady Diana Pettygree and her entourage.

Lady Pettygree realized that she and her friends were in a bit of a pickle when she saw the Germanian forces marching into Muhlenberg. She ordered two of her servents to ride quickly to the fortress town of Gemunden, some 10 miles away, in order to secure help from the Gallian garrison. The Gallian general Chevert, led a hand-picked force (6 btns of infantry, including Les Gardes Francaises, 4 sets of 4 pounders, 6 squadrons of heavy horse, 4 squadrons of Saxon cheveu-legers, and les Uhlans de Saxe, who had been acting as the bodyguard for Lady Pettigree.

The picture below provides an overview of the battlefield as it appeared to General Chevert. 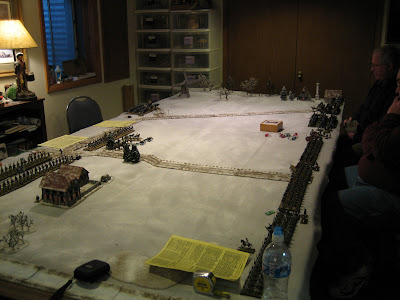 Opening set up for the Battle of Muhlenberg. The town is in the lower left corner. It extends north along a low ridge where the road can be seen. At the top of the picture is the Muhlenberg and the wind mill that gives the hill and the town its name. My aplogies for the overall darkness of the picture. It was a dark and snowy day, afterall.

Henceforth, I will go back to refering to the Gallians as "the French" and the Germanians as "the Prussians". This even confuses me.

The French plan for the battle appears to have been to overwhelm the Prussian garrison in the town with a quick head-on attack (5 French btns vs an apparent 3 Prussian btns in the town). While the Prussian attentions were thus focused on the frontal attack, Chevert would swing his cavalry brigade up the center and wheel left behind the ridge that protected the Prussian infantry. Meanwhile, a flanking force of Arquebusiers de Grassin would screen the cavalry's right flank by occupying the Muhlenberg heights.

The Prussian plan was to hunker down in the town with two battalions, leaving a third battalion in reserve. The Prussian cavalry brigade, commanded by Colonel Warner, was posted in the middle, thereby protecting the left flank of the town garrison. To provide further mischief, Colonel Warner also posted a squadron of hussars and four companies of jagers up on the heights were you see the windmill. Finally, a battalion of grenadiers was posted off board behind the wind mill hill. It would move onto the heights and then swing right into the flank of any attacking French force. 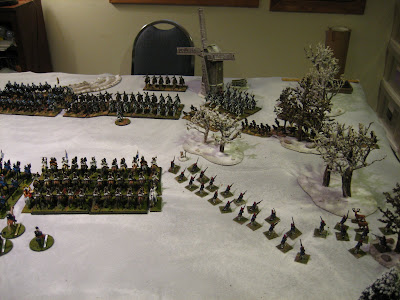 View of the French assault on the Muhlenberg, with Grassins advancing into the woods against the Prussian jagers. Gallian cavalry advances into contact with the Prussian cavalry.


The French fell upon the Prussian positions very quickly and thus Colonel Warner did not have much time to implement his plans. In fact, he rather forgot that he had a battalion of grenadiers lurking behind the hill. The Prussian Black Hussars fell into the grey-coated Mestre-de-Camp cavalry regiment of the French. At the same time, a single squadron of the Zieten Hussars came barreling down the Muhlenberg hill and into the flank of the Mestre-de-Camp. This helped to even out the odds or slightly favor the Prussians. In our BAR rules, hussars can only melee in two ranks whereas heavy cavalry can melee in three ranks. Thus, a head to head encounter of hussars versus cavalry should always favor the heavy cavalry. However, hussars hitting cavalry in the flank, like Warner did, can be enough to turn the tide. And thus the Mestre de Camp regiment went tumbling back to its own lines. The Prussian hussars rolled to determine pursuit, and off they went after the retreating French cavalry. They ran into a second line of French cavalry reserves (Uhlans de Saxe and the Saxon Rutowsky Cheveauleger cavalry). 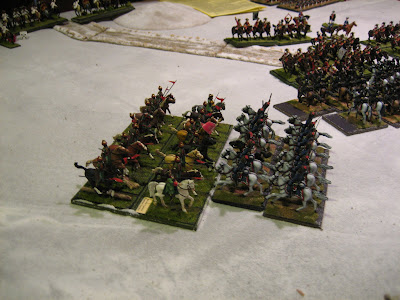 Uhlans de Saxe (left) and the Zieten Hussars (right) battle it out in the snow. The uhlans are Suren figures and the hussars are Stadden figures. In the background one can see the Black Hussars' pursuit being stopped by the red-coated Saxon cavalry. 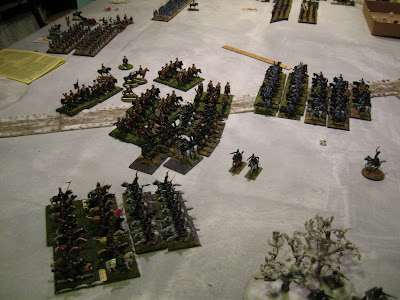 Overview of the grand cavalry melee. The pursuing Prussian hussars tumble into the second line of French cavalry, while the dragoons continue their melee at the top.

Now here, things get a little bit complicated. Remember the victorious Black Hussars and their pursuit of the Mestre de Camp? Well, they ran into the French second line, as noted above, and got decimated by the overwhelming numbers of French cavalry. The remains of the Black and Zieten hussars came tumbling back towards the Prussian lines. Now the Chevealegers joined the dragoon melee and their added weight of numbers proved to be the difference in that action. The end result was that nearly all of the Prussian cavalry was either hors de combat or routing away. Colonel Warner had one more card up his sleeve, the 20 figure Yellow Hussars, which he pitched into the mass of French cavalry. It was a bit of a forlorn hope with no prospects of success, but Warner had no choice, for once the Yellow Hussars were gone, the French cavalry had a wide open path into the Prussian lines behind the Muhlenberg ridge and village. 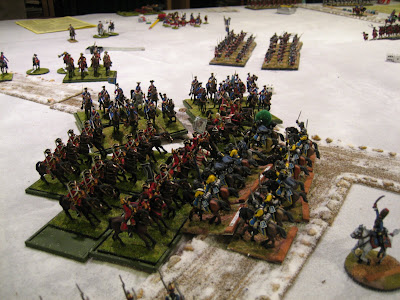 The Yellow Hussars (Foundry Figures) are overwhelmed by the Rutowsky Cheveauleger cavalry (Elite Miniatures French SYW). Note that Colonel Warner has not attached himself to his cavalry. He rolled a "charisma" die roll of "1" which means that he adds a -1 to morale of any unit to which he is attached. Thus, his services were not required for the rest of the day.

Colonel Warner wasn't paying a whole lot of attention to events in the village of Muhlenberg, and he had also forgotten about the battalion of grenadiers in his reserve (which is a good reason why one should not command a mixed force of infantry and cavalry). The French infantry attacked the village in grand style, with the front line of the Bulkeley, Royal Deux Ponts and the Royal Roussillon regiments, from the French right to left, moving in on the village. 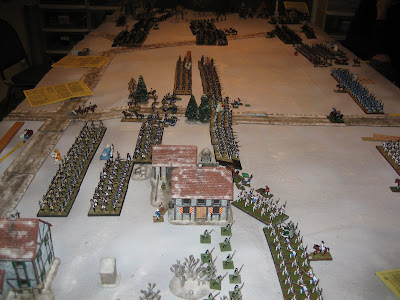 French attack on the town (coming from the right with the Prussians on the left).

The Prussians got into a brisk fire fight with the French, who were in on the Prussian cannons before they could inflict too much damage. The Prussian regiment IR24 - Schwerin spent the whole game in a firefight with the French (Irish) regiment Bulkeley for the remainder of the game, while the Royal Deux Ponts regiment pushed its way through IR20 - Bornstedt in the centre. The Prussians would have been better served occuppying some of the town buildings, but still they managed to hold back the French tide for nearly five game turns. By then end of the fifth turn, the French had already won the cavalry battle which rendered the defense of the town meaningless. 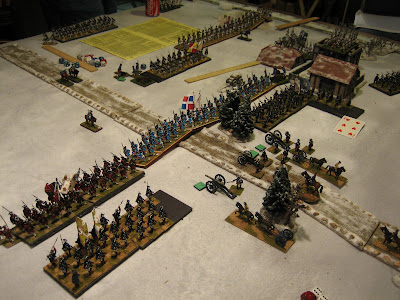 
The game lasted five turns and the outcome was not in doubt. It was a French victory. The purpose of the battle was to fight a smaller action on my 6ft by 12ft wargame table and demonstrate that one does not have to have massive Big Battles on 30ft long tables in order to have some fun. We had four players (Bill Protz, Randy Frye on the French side; and Kieth Leidy and Der Alte Fritz on the Prussian side). The French had a larger army on purpose, given that the Prussians were holding some readily defensible ground and I wanted to see how an asymetrical, or uneven pair of armies, would work as a game scenario.

I might tweak the scenario somewhat and give the Prussians more heavy dragoon cavalry, rather than a substantially hussar mounted force, because the hussars are at a distinct disadvantage fighting melees with only 2 ranks versus 3 ranks for the French heavy cavalry. Although the Black Hussars did have some initial success winning the first melee, it was the uncontrolled pursuit that got them into severe trouble. So maybe that is the way that it should be.

My Prussian grenadiers would have come in handy either holding in reserve behind the Muhlenberg Ridge near the town, where they could have helped push back the French infantry. Or, they should have advanced onto the Muhlenberg heights, pushed back the Grassins, and then posed a threat to the flank of the French cavalry. That was my original intention, but I got all caught up into the mechanics of the big cavalry melee and forgot to move the grenadiers onto the battlefield until it was too late. C' es la vie!

Terrain Notes: Herb Gundt made all of the trees, road segments, river segments and winter buildings. For the ground cloth, I used a grey felt cloth and spritzed some white spray paint on it in splotches. Then I dusted the cloth with Woodland Scenics Snow flock.