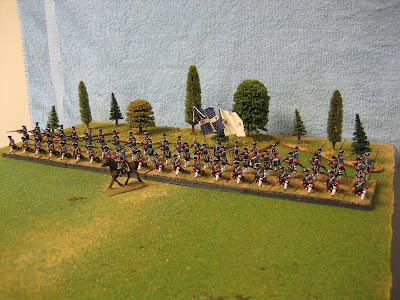 
The French, Austrians and other assorted "bad guys" have not gotten the attention that they deserve on the pages of The Alte Fritz Journal, so I thought that I would post a few pictures of the victors of the recent Battle of Muhlenberg. Bill and Randy have been adding to their collections of French, so my painting of the same has ground to a complete halt over the past year. I have a French brigade of 4 battalions that consists of single battalions of the Regiment d'Eu, the Irish regiment Bulkeley in French service, Les Gardes Francaises, and a battalion of the Arquebusiers de Grassin.


The Gardes, shown in the picture above, are those wonderful 30mm Suren figures (also known as The Willie Range). I like the slenderness of the figures and animation is very lifelike. If you peruse the picture up close (please click the picture to enlarge it for a better view), you just might spy the Gardes officer doffing his tricorn and bowing at the waist to honor his opponent or perhaps to honor Lady Pettygree or one of her comrades. The Suren range also includes a nice selection of line infantry poses that include marching, firing and running poses. I would recommend against using the running pose as only one foot is affixed to the lead base, posing potential breakage problems. Bill has a battalion of such figures, and I do admit that they look very nice and so I'm tempted to paint the castings that I bought. 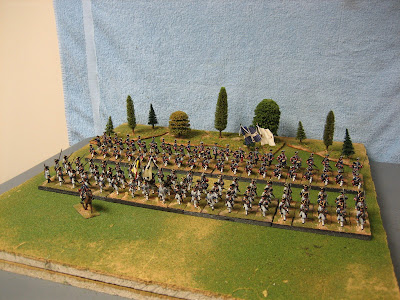 
Above you will see a picture of the Regiment d'Eu, using Capitulations Figures from France. I like these castings very much because they are lifelike, their coats do not have the turnbacks fastened, and the faces are very well rendered. In most cases, you have to glue the right arm onto the figure and it can get a little dodgy at times, but it is well worth the extra effort. I also have a second battalion of Capitulations figures painted as the Irish regiment Bulkeley (shown below). Regiment d'Eu is famous for its defense of the redoubt d'Eu that it defended at the battle of Fontenoy in 1745. It seems to have performed well during its service under Monsieur le general de Chevert in our little campaign. It was a mere 30 figures for over a year, but last summer I finally boosted d'Eu up to 60 figures so that it could stand up in a prolonged firefight with the 60 figure British and Prussians that we have in our collections. 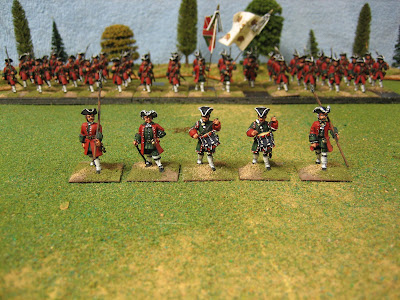 
The above picture provides a close up of some of the command figures from the Capitulations range, painted as the Irish regiment Bulkeley. Don't they look rather grand in their red uniforms and green cuffs. And I really like the Irish regiment flags for some reason. GMB Designs does an excellent rendition of these colorful Irish flags. 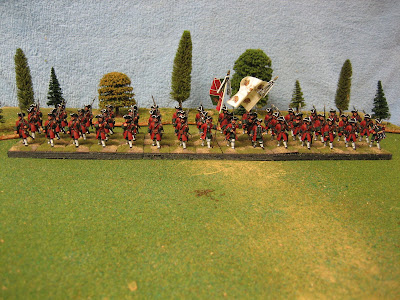 
And above, here is a picture of 45 members of Bulkeley ( I was having problems fitting the fourth stand into the picture, but I do have 60 figures in the battalion). One of the nice things about the French army during the War of the Austrian Succession (1740 to 1748) and the Seven Years War (1756 to 1763) is the variety of infantry types fighting under the fleur-de-lys for King Louis XV. You can field the basic French regiments in their white coats and various colored cuffs (red, white, black, blue, purple, yellow, green). The for variety, you could add some Swiss and Irish foreign regiments in their red coats and some German regiments in their light blue coats, and there is some speculation that an Italian regiment wore brown coats. Then add into that, the veritable potpouri of light infantry legions that were raised to fight in French service. One of the most famous of these are the Arquebusiers de Grassin, shown below. 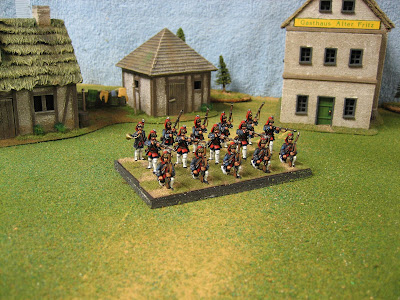 
The Arquebusiers de Grassin were formed in 1744, under an ordinance authorizing Simon Claude, Chevalier de Grassin, a captaine in the Picardie regiment, to raise a corps of light troops. This grant was in recognition for the zeal and distinguished action of the Chevalier during the Bohemian and Bavarian campaigns in 1742 and 1743. The regiment was formed in Metz with an initial strength of 1,200 men, including 900 fantasins and 300 cavaliers. The corps was organized into 9 companies (100 men and 3 officers) of infantry and 6 companies of cavalry (4 officers and 50 men each. In the field, the cavalry operated as 2 squadrons. In the infantry companies, the grenadiers were amalgamated with the grenadiers of the other companies to form one grenadier company. Eventually, two permanent grenadier companies were formed so that the line companies would always be near full strength.

The Arquebusiers achieved fame at Fontenoy in 1745, where they were deployed in the Bois de Barri and caused fits and havoc among the British infantry given the unpleasant task of routing them out of the woods. After Fontenoy, the cavalry component was increased by 200 troopers, thus giving them 8 cavalry companies. The corps was disbanded in 1749, after the conclusion of the War of the Austrian Succession, with its men amalgamated into the Volunteers de Flandre.

By the way, I want to thank Greg Horne for coming up with the idea to have these figure made by Eureka Miniatures under the auspices of their Eureka 100 club. I also am grateful to Nic Robison of Eureka for putting them into production. Greg and I flogged the idea of getting these figures into production by rounding up a total of 10 people who collectively would be willing to buy 150 figures. That averages out to a mere 15 figures per person - something that should be manageable under most people's budgets. Using this marketing model, we were subsequently successful in getting Eureka to produce SYW Saxon infantry and cavalry as well as Dutch WAS infantry, cavalry and artillery. There are similar efforts to get the WAS French and British infantry into production via the Eureka 100 Club. 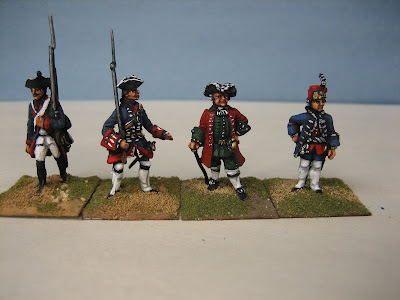 Comparison photo of (left to right) Stadden, Suren, Capitulations and Eureka figures in the collection of Der Alte Fritz. Click picture to enlarge.


The picture above shows a comparison of Staddens, Surens, Capitulations and Eureka figures that we use in our SYW armies for Gallia and Hesse Seewald. While each figure has its own style, you can see that they are all compatible ranges and therefore fit well on the tabletop.