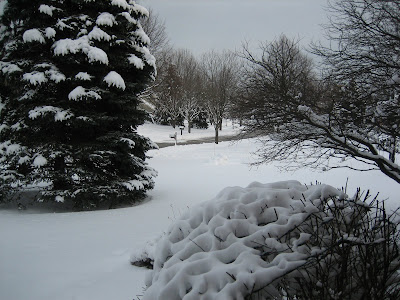 Greetings from Hesse Seewald and a Happy 1758 (2008) to everyone from Der Alte Fritz. The above picture depicts the view from the front porch of Schloss Seewald this morning. As you can see, the new year greeted us with about six inches of wet puffy white snow. I am tempted to go outside and make a snowman wearing a tricorn hat... Nah! As one can see, the weather is not suitable for active campaigning and so I will probably spend some time in the barracks getting more troops ready for the Spring Campaign of 1758.

Instead, I will show you a picture of the first three recruits to the Landgraf Georg Ludwig's Riesengarde battalion of Hesse Seewald. The Landgraf has decreed that each of his 16 regiments shall furnish a complement of ten men to form the first company of the new Landgraf's Riesengarde, or a total of 160 men (16 figures). The Stadden SYW Prussian grenadier 30mm figure will be used in this regiment, along with GMB Designs flags for either the Hessian Garde of the IR6 Prussian Garde Grenadier battalion. 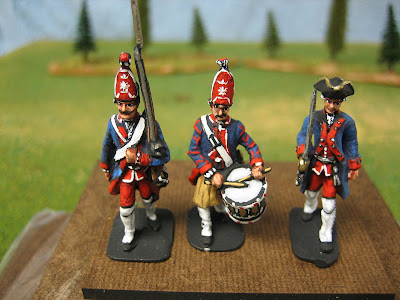 
The grenadier and the drummer are both from the Stadden range of SYW Prussians, while the officer is one of my own Potsdam Miniatures. The uniform is based on the Lange Kerls of Frederick William I of Prussia, circa 1729. During this period, the garde wore a more traditional mid-18th century mitre (akin to the ones worn during the SYW) while the red gaitors were replaced by white gaitors. Around 1730-1736, the uniform was changed, yet again, to something closer to that worn by IR6 Grenadier Garde during the SYW. By this I mean that the breeches and waistcoat were yellow, instead of red and the cut of the coat was a little tighter. The final uniform transformation was instituted by Frederick II in 1740.


I expect that it will take awhile to fill the regiment out to a full 60 figures, given my pledge to reduce the pile of lead that has accumulated in my basement. I have enough Staddens to paint the first 16 figures for now. These will accompany der Erbprinz onto the battlefield as his personal headquarters guard, i.e. they will be "just for looks" and will not engage in battle. Once I build them up to 30 or 48 figures, then they may participate in some of our SYW battles.

1806 Taster
Below is a picture of one of my 1806 Prussian battalions (IR24 Zenge) that I have been working on. The unit was started back in December 2006 and only recently brought up to the full complement of 60 figures plus 5 extra scheutzen. They are not yet flagged or based yet, as you can see. 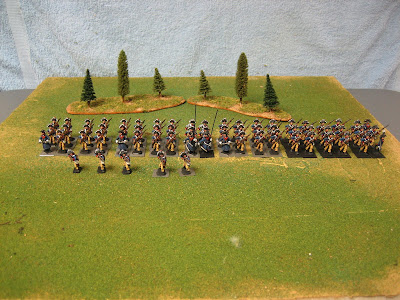 I am still working out how to base the Prussians. My initial thought is to have smaller movement trays designed to hold six figures in three ranks. Thus each stand would represent a zug, or platoon of 60 men. I may just put twelve figures on a stand (in three ranks) and call each stand 2 zuge, or platoons. This roughly corresponds to a company, although I should note that the company was only an administrative unit, rather than a tactical unit. I am still unclear as to whether or not the 1806 Prussians operated in grand divisions of two zuge, like they did during the SYW. During this period, the battalion was divided into ten zuge, or platoons. So in the picture above, the figures are divided into ten groups of six figures. There were also 50-60 scheutzen per battalion and a 6-pound regimental gun. So I will have 5 scheutzen figures per battalion and maybe a battalion gun (I don't know about this part yet).

Prussian brigades are likely to have 3 musketeer battalions and 1 grenadier battalion in my wargame setup. Again, this is still in the planning stage so nothing is set in stone yet. I am nearly done with the first three Prussian battalions and plan to spend the rest of January 2008 working on the 1806 Project.

SYW Austrian Update: After that, I will probably return to painting SYW Austrian cavalry. Dennis Smail has kindly agreed to continue working on the Austrian infantry for me. I received the Gaisruck battalion (purple facings) yesterday and they really look nice. I will endeavor to base both Gaisruck and Josef Esterhazy soon so that I can take some pictures and show you Dennis' fine brushwork.
Posted by Der Alte Fritz at 1:33 PM