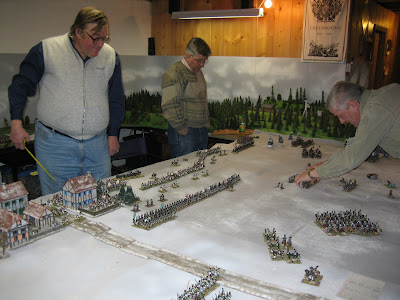 Battle of Eylau Re-enactment - February 2007. George Rust, Mike Husky and Keith Leidy (left to right) contest the village of Eylau in a game played earlier in the year.

The paint is drying on the last figures painted in 2007, so I thought that it would be interesting to take an inventory of what I painted during the course of the year. My initial talley indicates a total of 1,015 figures were painted during 2007. This breaks down into 881 infantry, 12 artillery crew, 8 mounted generals, and 114 cavalry. Under the system created by Phil Olley (or Olley Painting Points), wherein an infantry figure or cannon counts as one point and any mounted figure counts as two points (one point each for the rider and the horse), my painting output translates into 1,137 Olley Painting Points. I think that this might be a new personal record for Der Alte Fritz.

Let's break down the output by country to see where the concentration was:


Well, it is easy to see that my focus was on my SYW Prussian army during 2007. I painted the equivalent of 6 battalions of infantry and 7 12-man squadrons of cavalry. I sold several Prussian battalions during the year as I began to weed out some older figures so that I could replace them with my own Potsdam Miniatures. The Big Battalion Game in October 2007 underscored my need for more Prussian cuirassiers and so I added 48 more of them after the game. My Prussian army is more or less completed now. I will probably top up the Black Hussars with 12 more figures to get them up to a 60-figure regiment and add 12 more Garde du Corps to get them up to three squadrons. I also have to start the task of replacing my artillery guns with the new Berlin Zinnfiguren models that I purchased this year.

The Austrians have not been neglected, despite what the painting talley shows above. Dennis Smail has been painting Austrian infantry for me, adding three 60-figure battalions to my army during 2007. The latest two battalions, the Josef Esterhazy and the Gaisruck battalions, bring my Austrian force up to nine battalions of infantry. My goal is to get to an even dozen Austrian battalions and add more cavalry in 2008.

The 1806 Project got off of the ground during 2007, with two battalions of French line infantry completed. I had finished three Prussian battalions of 40-48 figures towards the end of 2006 and I am currently in the process of building these up to 60-figure battalions. I expect to devote January 2008 to painting 1806 Prussians. This will give me a break from painting strictly Seven Years War figures for awhile and I welcome the change of subject matter. That said, I did paint a couple of the Riesengarde or Lange Kerls today. I now have one grenadieir and one officer in this version of the Potsdam Guard.
Posted by Der Alte Fritz at 4:06 PM