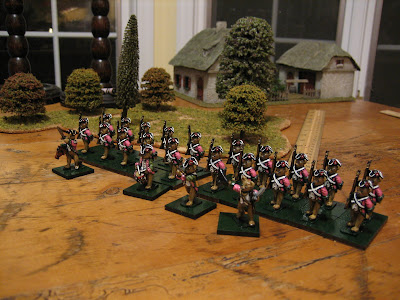 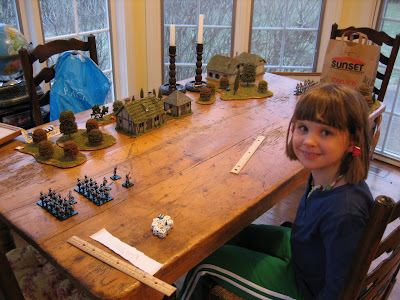 Lady Emma Cuddleston-Smythe watches as her Blue Bear army marches onto the field of battle. (Bears by Eureka Miniatures, trees by K&M, buildings by Herb Gundt - the builder, not the owner of the Gundt Bear Company).

We held our first Teddy Bear Wargame today and I'm happy to say that my daughter holds great promise as a future general, because she thoroughly defeated her Daddy 25 points to 10 points. The field of Mars was our kitchen table (3ft by 6ft) with two armies (blue and pink) of 24 bears facing one another for the very first time. The prize: Almond M & Ms strewn about the table top in various buildings and wooded areas. Whoever inflicted the most "hits" and collected the most M&Ms would be the winner of the game. 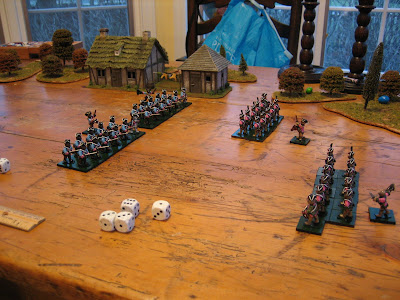 The picture above depicts the advance of Lady Emma Cuddleston-Smythe's army of blue bears, from the left. Note the perfectly aligned battle lines of the blue bears. It makes a father feel right proud, it does. In contrast, Lord Paddington Bear's army of pink bears, advancing from the right, was having problems keeping the lads together in a common frontage. You can see some of the "honey pots", represented by the M&Ms, in the Hundred Acre Wood in the background. Lady Emma's army has already captured the little hamlet of Stiefsburg, although she is unaware that each house contains a veritable treasure of honey pots.

The rules that we used were made up on the spur of the moment. A D6 was thrown each turn to see who would have the first movement initiative. A player could then opt to walk (three D6 movement) or run (four D6 movement rate). Firing ranges were Close Range (0-6" and a 1 or 2 on a D6 per figure firing for a hit) and Long Range (7-12" and a 1 on a D6). All casualties could be saved on a saving roll of 6 on a D6. Casualties were then placed "in the hospital" for the remainder of the game. 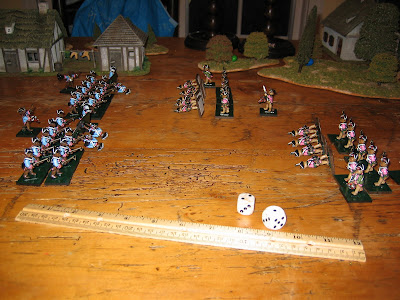 The next picture, above, shows the state of the respective armies at the end of Turn 2 (which was the first turn of musketry, or should I say corkage - the Bears have cork gun/pop guns instead of muskets, and getting bonked on the head by a cork sent a bear to the hospital). Lady Emma Cuddleston-Smythe won the first firing initiative and mowed down 8 of my Pink Bears in the opening salvo. I think that I was only able to save one of my bears with a saving throw. Lord Paddington Bear's lads only knocked down three of their counterparts on the first turn. In the picture above, you can see that the two units at the top are in close range, while the two units at the bottom of the picture are in long range. 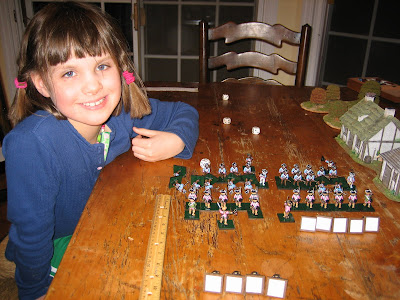 Lady Emma Cuddleston-Smythe looking very pleased with the performance of her Blue Bear army. Note all of the Pink Bear casualties laying on the ground.

The second firing turn was a little more promising for Lord Paddington Bear's Pink Bear army. They sent 6 Blue bears to the hospital while losing only one of their number. Thus the score was 9 to 8 in favor of the Blue team at the end of turn 2. This was to be the high-water mark of the Pink team, as they were unable to inflict any more trips to the hospital on their adversaries. At this point, both sides decided to start collecting honey pots in the nearby Hundred Acre Wood. 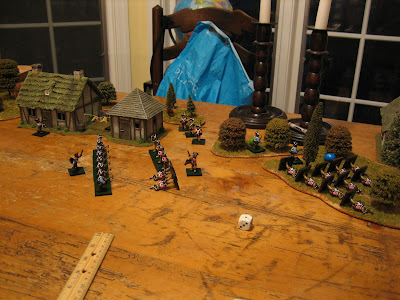 The Pink army casualties are starting to mount up in the Hundred Acre Wood, on the right. The Blue bears can be seen running into the woods to collect honey pots (M&Ms) while a forlorn hope of Pink bears, under the personal guidance of Lord Paddington Bear, conduct a rear-guard defense.

The third turn of firing resulted in a complete whiff by the Pink team, while the Blue team inflicted two more casualties. Thus the score was now 11 to 8 in favor of the Blue team. The Blue team was also running away with most of the honey pots, having collected 4 in the village of Stiefburg, 2 more in the Hundred Acre Wood, and most embarrassingly, 2 more honeypots in Gundtdorf, far in the rear of the Pink army's lines. The Pink army had 2 honey pots collected from within the smaller of the two buildings shown in the picture above, as well as control of 2 more honey pots in the Wood beyond the village of Stiefburg. 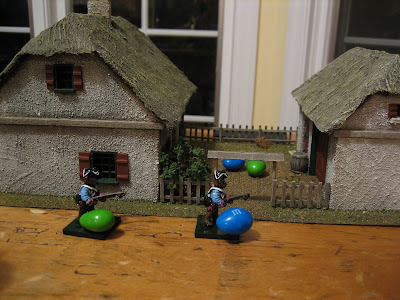 The fourth turn was a complete disaster for Lord Paddington Bear's army. He lost 4 more bears while inflicting no damage on the Blue army. At this point, Lord Paddington Bear was the last bear standing in front of a firing line of Blue bears. Thus, he decided that it was time to skedaddle, and he did so without informing the garrison of 4 Pink bears, holding out in the little tiny house. Lady Emma decided that it was time to storm the tiny house and capture the honey pots and the Pink bears therein, the storming of which is shown below. 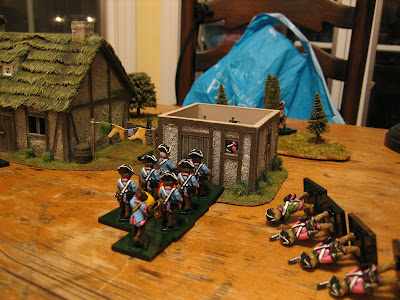 The storming of the Tiny House by the Blue Bears.

I made up some quick melee rules on the fly, as it were. Each side would get one D6 for each bear participating in the melee. The side with the highest score would win the melee. Lady Emma threw seven dice to four for the defenders, outscoring them 32 to 20, so she won the melee and captured two more honey pots. The four Pink bears inside the building had nowhere to run, so the surrendered (and counted as hit points). After the melee, there were only four members of the Pink army still standing on the kitchen, erm wargame table and so it was obvious that Lady Emma's army was victorious over Lord Paddington Bear's army. Thus to the victor goeth the spoils, which in this case, were Almond M&Ms. Her Highness consented to sharing her large pot of loot with her Daddy, which was greatly appreciated.

This will undoubtedly be the first of many battles in the Seven Bears Wars and I look forward to future encounters on the kitchen table.