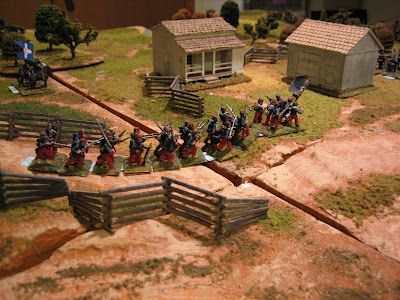 The 14th Brooklyn deploys on McPherson's Ridge at Gettysburg. Variety of figure brands, all painted by Dennis Smail of Lexington, KY. While not exactly Zouaves, they convey the look of the those classy, sassy and saucy fellows.


Well my friends, I hate to break it to you, but Der Alte Fritz also does the American Civil War. And just as Ike and Tina Turner "don't do nothin' nice and easy", Der Alte Fritz doesn't do any wargame periods in small figure to man ratios. I've been using th 1 to 10 ratio and 25/28mm figures since the 1980s, when I first started wargaming on a regular basis. My armies are organized circa 1863 and represent Henry Heth's Confederate Division (4 brigades: Archer, Davis, Brockenbrough and Pettigrew) and the Federal First Corps divisions of Wadsworth and Robinson. All that plus some miscellaneous cavalry units (3 regiments per side organized into 20 man mounted/15 dismounted per regiment plus horseholders). Pettigrew's brigade has a couple of big whompin stompin 80 figure regiments from North Carolina, and gosh darn it all if they aint a purty sight to see.

My interest in the Civil War goes back to my youth when my father, a huge Civil War buff, took the family on a Spring Break trip from Chicago to New Orleans. Along the way, we stopped at places such as Cairo, IL where US Grant was headquartered prior to his 1862 campaign into Tennesse, as well as the battlefields of Fort Donelson, Shiloh, Corinth, Champion Hill and Vicksburg. This was during the Civil War Centenial period of 1961 to 1965 when the whole country went nuts over the Civil War. I was hooked on history for life. My father would tell us stories of what happened at each battle site and really brought the story to life with little anecdotes about the personalities involved in the various battles.

When I became a wargamer, it was strictly SYW to begin with, but then my friends in Lexington, notably Dennis Smail, started collecting and painting ACW armies. For awhile I was happy to participate in their games and not own any figures. However, the bug caught up with me and I painted a brigade (Ector's Brigade of Texas and Arkansas foot cavalry at Stones River). Eventually, I went "all in" and started collecting my own armies at the 1 to 10 ratio and culminated this effort with a portrayal of McPherson's Ridge, the first day of Gettysburg, at Historicon in 1994. I suppose that the effort sort of burned me out, and while I still have that collection of figures, I have probably only gamed with it a couple of times over the past ten years. 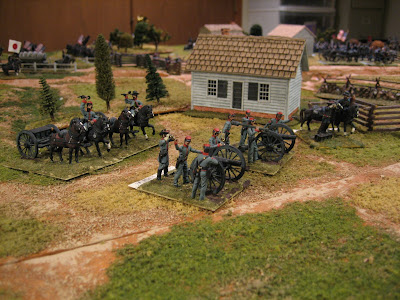 So let's cut to the chase and talk about the onset of Zouave Fever that seems to have struck me of late. It goes like this: I have a one hour train commute to work, each way. So this gives me time to get a lot of reading in, so I usually bring a history book along with me and read a few chapters each day. Over the past several months, I've been reading the Gordon Rhea series of four books covering Grant's Overland Campaign of 1864. The books follow the various battles with the first one covering The Wilderness, the second one Spotsylvania and the Road to Yellow Tavern, followed by To The North Anna, and finally ending with Cold Harbor. I haven't read the books in their chronological order though. I started with North Anna, then Cold Harbor and then I bounced back to the Wilderness, and now I'm finishing up with Spotsylvania. Mr. Rhea is an excellent writer and the words seem to flow effortlessly, yet succinctly, from his keyboard in a manner that is easy to understand and enjoyable to read. I strongly recommend the four volume series to anyone interested in the 1864 campaign.

At any rate, Dennis had a few extra ACW cavalry (Redoubt figures) that I bought off of him recently, and this, combined with my current reading, seems to have rekindled my interest in gaming the American Civil War. I am daydreaming over the possibility of wargaming the ACW on Bill Protz's 24 foot long table with these big ACW battalions.

This got me thinking about an old project that has been gathering dust since 1994 - the Zouave Brigade. If you are gaming with the Army of the Potomac, you've got to have two things: (1) more cowbell, and (2) lots of Zouaves. Now there weren't too many Zouaves left by the time Gettysburg rolled around, although there were a few. However, interestingly enough, there was a brigade formed in 1864 (Roman Ayres' brigade in the 5th Corps) and they had a rather rough time of it in the Wilderness (at Saunders Field) and again at Spotsylvania (Laurel Hill/Spindle Farm). Whether the Zouaves were at Gettysburg or not, I''ve decided to create a quasi-fictionall Zouave Brigade that will include the 5th New York (Duryee's) and some of the units that were more prominent during the 1862 campaign.

I checked out the box of figures that are still stored in the basement. I have 125 Connoisseur figures primed and partially painted as the 5th New York, the 140th New York and the 76th Pennsylvania. Then I found a box of 60 Foundry Zouaves and another box of 63 Old Glory Zouaves, both unprimed at this point. So I've got enough figures to build up the brigade to four or five regiments and mix in a number of different figure brands to give my Zouaves even more individuality and personality. Zouave Fever: Catch It!
Posted by Der Alte Fritz at 12:02 AM