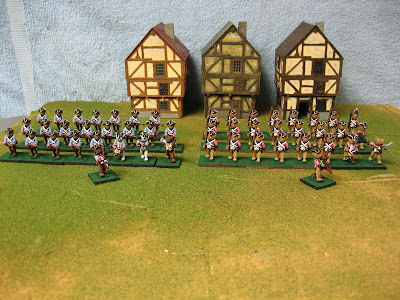 
At long last, the Pink and Blue Teddy Bear Christmas armies are completed (at least the first installment of the same) and drying in the varnishing shed. I have two 24-figure bear armies, with one army decked out in pink coats with green facings, and the second army wearing sky blue with pink facings. This is the first time that I have ever gloss coated a wargaming unit, and I'm rather pleased with the overall effect. The figures shown in these pictures have not yet received their gloss coatings. I used spray varnish and plan to give each unit three coats of varnish, to protect them from the wear and tear that they are likely to get from my 9-year old daughter. She is always talking about wanting to wargame with me, so I thought that this would be a fun way of doing it.

I have not made up any rules, as yet, but rest assured that they will be very, very easy to learn. I am thinking that firing will be with a D6 and it will take a natural "1" (or bulls eye) to get a hit. Melees will be done by matching up the figures one on one and having each player roll a D6 per figure. The highest roll wins that individual melee. I may use saving throws, but that might add a level of complication that my daughter isn't ready for. 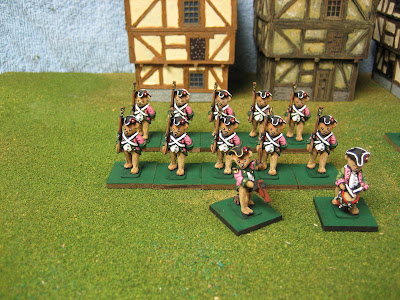 The Pink Army of Eureka Teddy Bears in March Attack Pose. Note the officer riding the hobby horse and the reversed uniform colors on the drummer. 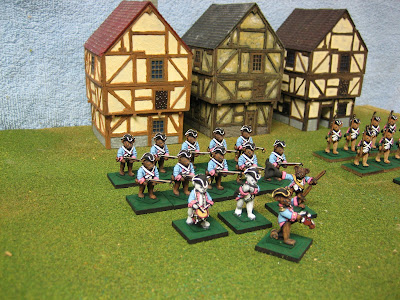 The Blue Army of Eureka Teddy Bears in the advancing pose. In this unit I made the musicians white Polar Bears while the rest of the battalion are Brown Bears. Note also that each army is in a different pose to make the difference more noticeable.


The figures are super glued to one-inch square MDF wooden bases and then painted a dark green. I elected to use the larger bases because my daughter has problems with her fine motor skills so I figured that it would be easier for her to pick up the larger bases. The other option was using a 3/4-inch base, but there is less to grab with the smaller base. I had thought of finishing the bases with texturing (spackle, flock and pieces of scrub brush), but elected to go for the Old School Toy Soldier look with the plain green bases. I am also figuring that a few of the figures might eventually break off of their bases, so it would be easier to make repairs if I leave the bases unflocked.

At a later date, I will add 8 grenadiers, 6 cavalry and a cannon with 4 crew to each army. I simply didn't have the time to finish everything before Christmas. I also have to work on the standard bearers for each regiment. The flag poles provided by Eureka have rocking horse or duck finials, but I like the idea that one of my blogger friends used for his Teddy Bear army: he put a pot of honey on the top of the flag pole. The artillery crew comes with a honey pot and I may use these for the flag finials instead of using them with the artillery crew.

These bears were fun to paint, but I look forward to getting back to historical miniatures soon. I have some 1806 French and Prussians on the painting table and these are likely to be my next project. I do need a bit of a break from painting SYW figures, you know.

Merry Christmas to all of my readers. I thank you for all of your kind comments and support for my on line journal. Your enthusiasm for my work keeps me motivated to write new articles all of the time. This is a lot of fun for me.
Posted by Der Alte Fritz at 12:12 AM