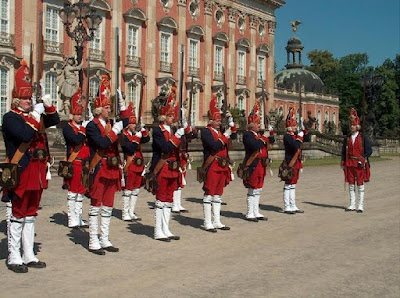 The Riesengarde
I keep looking at pictures of the Prussian Lange Kerls and the more I look at them, the more intrigued I am by the idea of adding a unit of guards in red breeches and waistcoats to my SYW Prussian army. I know that Frederick II disbanded the unit when he became the king of Prussia (and replaced it with a new Grenadier Garde IR6 single battalion regiment), but these fellows look so nice and their uniform is so unique that the idea is hard to resist.

I have painted one sample figure using the Stadden grenadier figure and I like the result enough to consider painting some more. I have 15 spare grenadier castings, so I'll probably paint them as Lange Kerls over the Christmas break next week. I might attach them as a company to one of my other guard units or just keep them as a headquarters guard until I can paint more.

The picture shown above can be found on the website of a re-enactment group in Germany that portrays the Potsdam Lange Kerls or Riesengarde Regiment. Click on the link titled Prussian Reenactors, on the left to find the web site and more pictures. I find that pictures of reenactors is both inspirational and helpful in getting information about certain uniform and equipment details. There is no guarantee that the groups will get it right, but the odds are fairly good that they have done the research and have done their uniform and equipment impressions accurately.


Teddy Bear Update
I have completed the 24 bears in the Pink Army (pink coats with green facings) and am now working on the Blue Army (sky blue coats with pink facings) that I will give to my daughter for Christmas. I hope to be finished with the project by Saturday. I liked painting the figures at first, but now there are a bit tedious and it seems like I will never finish them. This is probably due to the tight deadline that I forced upon myself. Had I started this project a month or two ago, and painted them at a more leasurely pace, then my attitude would be different. The payoff will be the reaction that I get from my daughter when she sees the figures. I know that she will like them and want to wargame with them. I envision us setting up a simple game on the kitchen table and playing an easy game with made-up rules that she can handle. I will post some Bear pictures over the weekend, probably on Saturday.


The 1806 Napoleonic Project
One of the next items on my list is to work on my 1:10 ratio 28mm Napoleonic Project. The antagonists will be the French in bicornes, circa 1805-1807 and they will fight the 1806 Prussians and maybe the Russians. So far, I have painted 3 battalions of French (2 line and 1 legere battalion) and 3 partial battalions (averaging 40 figures) of Prussians. The French battalions will have 72 figures while the Prussians will have 60 figures. I will be using primarily figures from Elite Miniatures.


In the near term, I envision a French army with 6 to 8 infantry battalions, a 4 gun battery of artillery and one or two regiments of light cavalry. Total of 3 players per side. The Prussians will have 8 battalions in two brigades, a battery of artillery, and some heavy dragoons and cuirassiers. So the Prussians will have a stronger cavalry brigade than the French, but be at a disadvantage with respect to the size of infantry battalions. This will be offset by giving the Prussians more battalions so that their overall numbers are higher. They will also have the handicap of having fewer light infantry and skirmishers than the French. The French will rely on their superior quality (this is the Grande Armee at its peak performance level, afterall) of infantry and the elan of their light cavalry. It should be an intersting match up.


Down the road, I may add a brigade of Russians. Back in the early 1990s, Dave Alsop sculpted a limited range of 1805-07 Russians in bicorns and stovepipe shakoes. I think that I bought something like 600 figures and stashed them away. The range did not include officers or musicians, so I bought what I needed from the Elite Miniatures range of Russians to fill out the battalions. I will use Elite's Russian cavalry and artillery from this period for the other combat arms. I plan to have a lancer regiment and a cuirassier regiment (they don't wear cuirasses during this period) and the usual overload of artillery for the men in green.
There will be more information about this project as it gets painted. The rest of the story will then unfold, so stay tuned for more.
Posted by Der Alte Fritz at 11:51 AM