I am looking for a large quantity of the Elite Miniatures 1805-07 French infantry in bicornes that were originally produced by Peter Morbey back in 1990. Peter has since redesigned the figures so that they are larger and a bit more animated. The sad story though is that the original Elite French are no longer available. I have been posting requests for some of these figures on various Yahoo Group boards as well as on TMP. Save for one modest purchase from some one on the Old School Wargamers group, I have had no success. So I thought that it would be a good idea to post my urgent request on this web site, along with some pictures, so that you could see what I am talking about.

Click on the pictures to enlarge them for better viewing (particularly the last picture which shows six of the original figures). I am looking for French infantry, painted or unpainted, as well as some chasseurs a cheval. I hope that some one can help me out. If you have any of these older Elite figures in your army, and maybe you are not using them as much as you used to, then consider selling them to me or trading for some of your wants and needs. 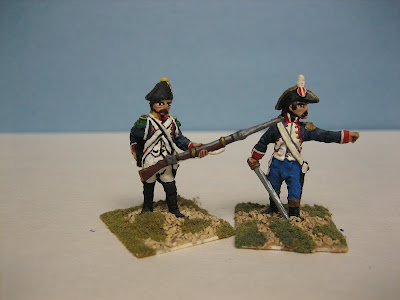 Elite Voltigeur and Line Officer - painted by Dennis Smail, circa 1990.


This is a nice picture of the voltigeur loading his musket in what I consider to be a realistic and dynamic pose. This is one of my favorite figures in the range and looks great standing next to the firing voltigeur pictured below. 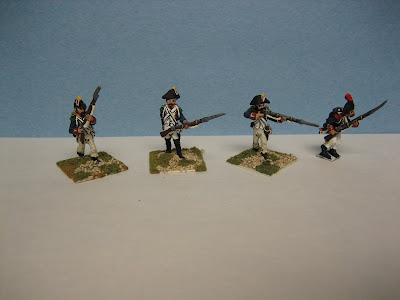 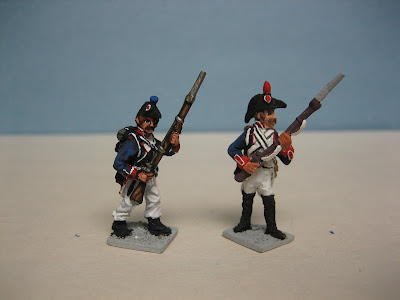 
The fellow on the left (above) was a more recent painting, while the one on the right was painted over 15 years ago. You can see the changes in my painting style. I wasn't using much in the way of shading back then and everything was grey primed underneath. I can also see that I never finished painting the musket barrel on the figure on the right. 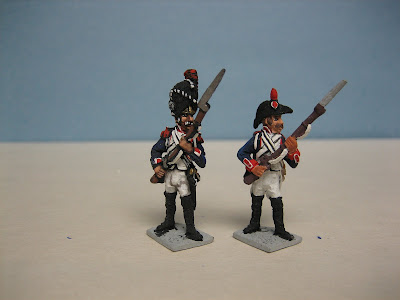 
I don't know why, but I really like this At The Ready pose a lot. The fellow in the bearskin looks particularly imposing. Again, the grenadier is a more recent vintage painting from a couple of years ago, while the fusilier is an old veteran of at least 17 years. 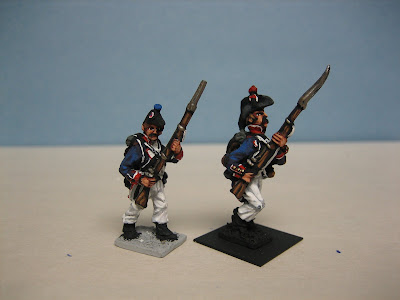 Comparison of the old Elite (left) and the new version (right) showing the difference in size and style between the old and the current versions. These were painted by me more recently.


I like both versions of the fusilier company man advancing. The size differential is rather amazing when you stop to consider that they are from the same sculptor. There is a certain elegance about the smaller figure that appeals to me. 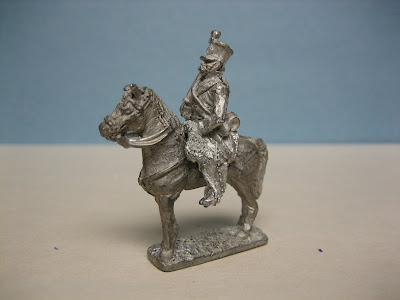 Original Elite Chasseur a Cheval on a current horse. I really, really need a lot of these chasseurs. The horse casting is still available, but alas, the shouldered sword pose is not. 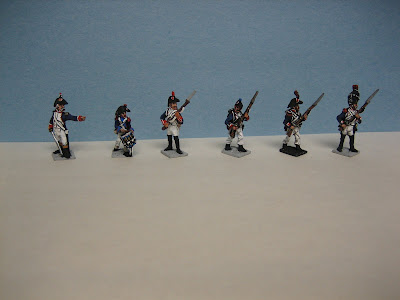 Six different poses of the old Elite French. Click on the picture for a better view.


Well, there you have it. I hope that pictures will jog some memories and a few of you will dig into your storage boxes or closets and pull out a few of your extra or unwanted older vintage Elite French figures. I like both ranges, but I would like to put together at least two battalions of the vintage figures for my 1805-1807 French army. I would also like to find around 30 to 40 of the Chasseurs a Cheval as well. There are also artillery crew figures, light infantry in shakos and bearskins that were part of the old range. I would consider buying some of these figures as well.

Someone asked me to post some pictures of the new Elite 1806 Prussian march attack pose and the two firing line poses (kneeling and standing firing). So I have done so, as you can see below. I like all of the new poses, and isn't it nice that Peter Morbey is adding new figures to an old range. 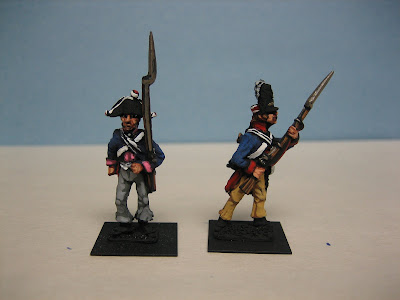 
The march attack figure is painted as a musketeer in IR23 von Winning regiment. I like the distinctive pink (or is it rose) facings. Initially, I want each of my Prussian battalions to have a distinctive facing color. This is the only one that I have painted so far. On the right, you can see one of the first of 15 grenadiers that I am currently working on. There is also a musketeer in the same pose that would look good as the third rank standing behind the two figures shown below in a firing line. I have to work on making the skin tones much lighter and eliminating the red brown undercoat that shows through too much and darkens the face too much. 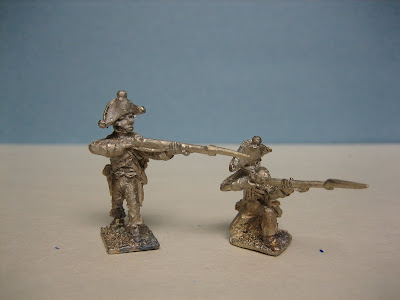 I am looking forward to tackling some of these figures soon. The standing figure seems to be based on the doll for the Prussian fusilier figure. I'm wondering if he could be painted as a jaeger since Elite doesn't have a standing jaeger figure yet. I also like the kneeling firing pose. My recollection is that I bought two 60 figure battalions like this last summer.